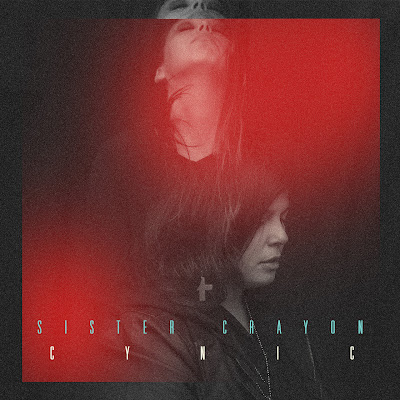 Rarely is there a band that shows as much early promise as Sister Crayon. Hailing from Sacramento, Sister Crayon released a stunning debut record, Bellow, in February of 2011—which seems like way longer ago than just two years. Combining elements of trip-hop and electronica, Sister Crayon created a completely original and spellbinding sound—anchored down by the haunting, otherworldy vocals of frontwoman Terra Lopez.

Details of a follow up EP began to trickle out in the fall of 2012, when the band previewed what would end up being the title track, “Cynic.” The wait is now over, and the Cynic EP has finally arrived. At five songs long, the EP expands on the already fully realized sound the band started with, filling it out with a maturity and depth you wouldn't expect from such a young band.

Cynic works as a bit of a concept EP—many of the lyrics directly address Lopez’s absent father, and her struggle to come to terms with the emotions that go along with that—anger, resentment, self-loathing, et. al. Obviously, it’s a very dark song cycle. The lyrics border on confrontational at times, and the band’s sound lends itself to a claustrophobic feeling—“Meager Leavings” exemplifies this the best.

Musically, Sister Crayon relies primarily on Lopez’s as well as her bandmate, Dani Fernandez’s love of MPC samplers and penchant for warm sounding keyboards. The band has added a live percussionist, who brings an organic aspect to the songs. Lyrically, Lopez is fearless—the demons she addresses in every song are dealt with an honesty you wouldn’t even find in somebody’s diary.

The standout track is the hip-hop influenced "Headline," based around a sample of an upright bass, taking an interesting turn with a lush arrangement during the refrain, juxtaposed interestingly with the lyrics, "I'm sorry if I'm a pessimist, but these don't mean shit, let it go where it goes." The opening line of the song, sung/rapped by Lopez, should have been a tip off to the direction it was headed: "I guess you could say i lost faith at an early age. I don't want to dissect it too much--I could use it as a fucking crutch."

Frankly, the only flaw that I found with Cynic was that it’s an EP—it ends entirely too soon. The press release for the album alludes to a new full length from the band due out in the fall. That really can’t come soon enough. I listen to a lot of music, and I get excited about new releases from artists I genuinely like—but Sister Crayon is an act I am 100% behind, and I would strongly suggest you take a listen to this EP.

The Cynic Ep is available right now courtesy of Circle into Square and Fake Four. You should do yourself a huge solid an pick up a copy. You can also stream all five tracks from the Soundcloud player above.