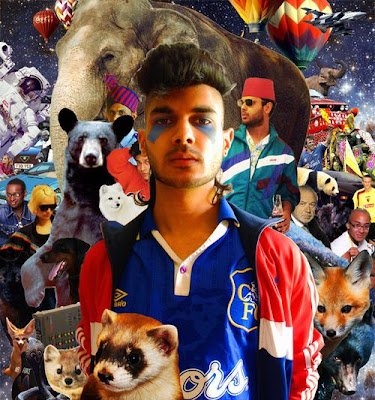 Alright. So who is Jai Paul, and why should you give any fucks about him?

This is kind of tricky to explain—at least the “who he is” portion of that question. The “giving fucks” part is easy—just take one listen to dude’s music.

Jai Paul is a young man from the UK, who is signed to big time UK record label XL Recordings (home of Adele, and others who are not Adele.) He was signed off the strength of one song and one song along—a demo from 2007 called “BTSTU,” that eventually, by 2010, had received attention from the likes of Zane Lowe (a legendary BBC Radio 1 host.) In 2011, the song was released as a single, and would eventually go on to be sampled by both Drake and Beyonce.

A year later, in 2012, another demo track, “Jasmine,” surfaced online, was given a proper release by XL, and then was lauded with acclaim. Paul is notoriously mysterious, which only adds to the hype surrounding him in indie music circles. But Paul had yet to deliver a full-length album.


Last weekend, a Bandcamp site for Jai Paul unceremoniously arrived, and a self-titled album was available for download—sixteen tracks, and none of them labeled with track names (although now thanks to some nerds online, a somewhat accurate track list was posted.) Once word spread about surprising release of this album, the Internet collectively shat itself to get a copy.

By the next day, however, Paul himself claimed that this was not a real album—that someone who had stolen a laptop from him had released the music. The plot gets very strange here—the blogger who initially discovered the “leaked” music tracked the Paypal account from the Bandcamp page back to a personal email address belonging to Jai Paul himself.

People have been speculating all week about what on earth is going on here—did he intentionally leak it himself, only to do a “take backsies” to create publicity? Was his laptop legitimately stolen, and someone set up a very elaborate ruse to release the music found within?

The compelling backstory only adds a layer of excitement to the music itself—needless to say, Jai Paul’s self-titled joint is well worth the hype it is receiving.

It’s tough to pin down the music Paul makes into one genre. I would almost go so far as to say that this record is “too future.” I mean, it’s not too future for me. Because I am usually on some next level shit anyway. But what I’m saying is that it may be too future for SOME people. There are elements of deconstructed R&B, electronica, funk, world, and straight up pop music found on the album’s actual ten tracks—there are six tracks that serve as odd interludes between songs.

It’s an intense listening experience—Paul has created a “big” record. It begs to be played on stereo at high volume, or in the car when you’ve got the top down and speakers up. But for real though, this is actually a headphone record. I say that because the single most incredible thing about this album is the production—the techniques, the value, all of it. This is one of the most batshit insane things I have ever heard. Every thing you hear—every vocal track, every weird sound effect, every drum beat, every hard pan from channel to channel, every time the sound drops ridiculously fast, only to come rushing back—it all sounds like it was PAINSTAKINGLY LABORED OVER to achieve the final sound you are hearing right now.

Keeping in mind that this may or may not be the real album, one has to look past the immediate flaws—every song, while meticulously produced and composed—sounds unfinished. By that, I mean the actual “songs” on the album seem to fade out prematurely, while the strange interlude tracks—one samples a Harry Potter movie, one samples a line of dialog from “Gossip Girl” which then segues into a beat based around the intro to “All My Life” by K-CI and Jo Jo—something that my wife noticed, like, RIGHT AWAY when she heard this in the car. So whether the interludes are truly interludes, or if they are just half sketched out ideas, they are kind of jarring to hear in between songs that may or may not be finished, that are already jarring enough to listen to.

The aforementioned early singles, “Jasmine,” and “BTSTU,” are both excellent—the former a very restrained electro-funk jam that slinks along unassumingly, the latter a very unrestrained electro-funk jam, with synthesizer waves that are just relentless. Tucked at the halfway point of the album is a rather surprising song—a cover of the 1998 pop song “Crush,” originally by Jennifer Page. Remember her? Of course you don’t. But I bet you know this song because it is awesome. It’s almost unrecognizable until he gets to the easily identifiable chorus. The album’s second song, “Str8 Outta Mumbai” is the kind of slick, internationally influenced, upbeat joint that a band like Yeasayer only WISHES they could write.

So if this is a leaked album, of possibly year’s worth of work, just given away, what does that mean for the artist known as Jai Paul? It’s the question that lingers after the album ends. Will this see a proper release via XL Recordings? Will Paul try again with another album’s worth of songs in a few years? Or is this it—will Jai Paul just be known for this mysterious album that was scrubbed from the Internet as quickly as it mysteriously arrived?

Jai Paul's self-titled debut album is not really available anywhere. If you know how to make the Internet work for you, you more than likely be able to track down a copy of it.