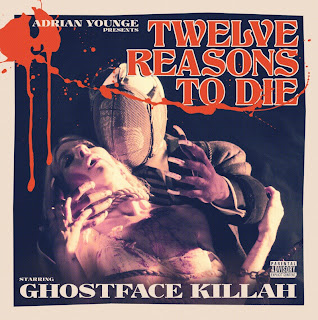 Ok, so the concept album is a dangerous thing.

There are varying degrees to which one can commit themselves to a concept. There can be an “overarching theme” to the record. Or, you can just flat out throw yourself into it, and every song is part of a larger story.

Given the troubled times we live in today—the Boston bombing and ensuing manhunt for the responsible parties, a gigantic explosion in Waco, combined with all the of gun violence as of late—it seems almost insensitive of me to be listening to 12 Reasons to Die, the new album from Wu-Tang Clan member Ghostface Killah. An example lyric—“Murder murder. Kill kill kill.” I cringed just typing that out.

Ghost is a Clan member I would put in the “upper tier” category of the Wu. Not nearly the breakout star that Method Man was, Ghostface is probably a close second as far as marquee names go outside of the group.

12 Reasons is a complete concept album, based around this ridiculous premise: Ghostface uses his “Tony Starks” persona—an enforcer for a mob crime family who is killed by his former employers. His remains are pressed into 12 vinyl records, and when they are played, they summon the Ghostface Killah. Yes. This is what this album is actually about.

12 Reasons is billed as being performed by Ghostface Killah and Adrian Younge—Younge is a composer best known for his score to the film Black Dyamite, leads a live band that perfectly apes a Stax sound for much of the album. Interestingly enough, the “Executive Producer” credit is given to the de facto leader of Wu-Tang—the RZA. But long gone are the days of the RZA’s dark, grimy beats, and samples lifted from Kung Fu, and later, Blaxploitation films.

The album opens with a bit of an introduction the concept—“Beware of The Stare,” the ladies singing the refrain warn. “Beware of the Stare of the Ghost. Face. Killah.” Is Ghostface’s Stare similar to the Care Bear Stare? I was just kind of wondering. 20 years have passed since Ghost delivered the opening line on Wu-Tangs debut record: “Ghostface catch the blast of a hype verse, my glock bursts, leave in a hearse. I did worse.” He was only 22 years old then. And 17 years have passed since the release of his solo album Ironman, one of the last few successful first-generation Wu solo endeavors.

Ghostface is 42 now, so maybe it’s naïve of me to want to hear that young, hungry, paranoid MC of yesteryear. He sounds kind of tired on 12 Reasons, as does everybody else who guests. Some of the guest spots are just downright embarrassing—like Cappadonna’s appearance on the track “The Center of Attraction”—a song that covers Tony Starks being set up by his boo, and being captured by the Deluca crime family.

Initially, I was impressed by the music on 12 Reasons—Younge’s band does a tremendous job of blending funk, soul, Stax, and some psychedelia—some of it even is reminiscent of Ethiopian jazz player Mulatu Astaqe, like on the track “The Rise of The Ghostface Killah.” But after a few more listens, I was just kind of apathetic to the whole thing. It also became really easy to tune out the rhymes—I give Ghostface credit for sticking to a story-driven concept album, but the content within lacks the immediacy of his other early solo albums.

While listening to this over and over, and writing this piece, I was wracking my brain thinking of reasons one should check out this album—I know I can’t come up with 12. One for sure would be if you are a die-hard Wu-Tang Clan fan. But outside of that, I’ve got nothing.

If you must, 12 Reasons to Die is available now in a multitude of formats, courtesy of Soul Temple Records. One of those formats is specifically the instrumentals to the album, which may be more palatable for those of you that do not enjoy the rappity rapping.

And before we go, let's just revisit better times, with Ghostface Killah's beautiful 1996 song, "All That I Got is You."