Hot New Joint: "Don't Swallow The Cap" by The National 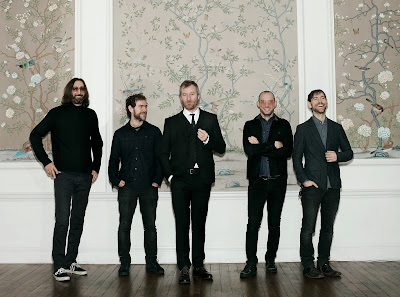 Whoa. I’ve barely had time to recover from the release of the first single off of the forthcoming album by The National. “Demons,” was released on Monday, and everyday since then, I’ve thought about the lyrics:

When I walk into a room
I do not light it up.
Fuck.

On Thursday, a second single from Trouble Will Find Me was unveiled—a surprisingly fast-paced song, “Don’t Swallow The Cap.” The song borders on being “jaunty”—a sound that they previously explored on the High Violet outtake “Wake Up Your Saints.” However, “Don’t Swallow The Cap” has a low-lying level of dread that prevents it from reaching that same feeling.

Low-lying dread and tension is something that The National excels at creating. In this song, it’s thanks in part to the multi-tracked vocals of Matt Berninger, and particularly how they are mixed. Just below the main track, where Berninger sings in a higher, mumbly range, sits a more ominous mirror image, where he is using a lower range. The effect this creates is rather jarring at first, but it adds an additional element to the overall atmosphere of the song.

Musically, within the song, there’s a lot going on—lush string arrangements, some faint female backing vocals—and again, like “Demons,” it’s a song driven primarily by the strong, steady drumming of Bryan Devendorf. There are some new elements that The National have not really explored in recent memory: you can hear some very low beeps and boops coming from a synthesizer, something you’d have to go back to their self-titled debut to hear from them. There’s also usage of a drum machine at the ending of the song—an odd choice for a band with such a talented drummer. But the sequencing of the drum machine is paired with cavernous guitar blasts, and the combination creates a very cold, mechanical spiral as the song comes to a finish.

Within the context of Trouble Will Find Me, “Don’t Swallow The Cap” comes right after “Demons.” Like many songs by The National, similar lyrical themes are present. There are no throwaway lines here, however. Berninger’s high/low register delivery is breathless, moving quickly through each line of the song. The lyric that sums up the general feeling of the song is:

I have only two emotions,
Careful fear and dead devotion.

The interesting thing about both this single as well as “Demons,” is that they aren’t really “single” material, and I’m beginning to wonder if Trouble Will Find Me is best consumed as a whole album, and that there isn’t that one song off of it that captures the zeitgeist of the band the way 2010’s “Blood Buzz, OH” did. That song was an anthem—it was an exciting song to hear. “Don’t Swallow The Cap” is exciting, but it’s exciting in a different way—a more restrained way, if that’s something that even makes sense.

As mentioned previously, Trouble Will Find Me is available on May 21st, courtesy of 4AD Records. Please buy the shit out of this album.