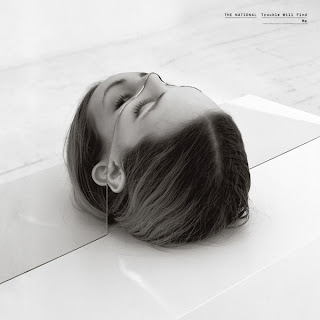 When it comes to most things, haters are gonna hate.

I’m uncertain what legit music critics think of The National, but I know that in the dumping ground opinions that is the Internet, people have got a problem with the band’s lyrics. Specifically, that the lyrics are too “first world problem-y,” or “white person problem-y,” or that they are about the burdens of being middle class and living in Brooklyn.

I, for one, do not have a problem with The National’s lyrics. In fact, it’s their lyrics, and the original delivery by frontman Matt Berninger, that makes their music worth listening to. Or perhaps I am just a white, middle class individual with my share of burdens, so maybe I just completely identify with what he is singing about.

It’s been a minute since we’ve heard anything new from The National. The band seems to be on an “every three year” cycle of a new album and then subsequent and relentless touring to promote it. After 2007’s Boxer made them a household name, and 2010’s High Violet lead them to be number three on the Billboard Top 200 Album chart the week of the album’s release, there’s really no telling what this year’s Trouble Will Find Me will do for the band. I do know that the venues they are playing on tour are already getting bigger-- rather than booking multiple shows in the 1000-ish capacity First Ave in Minneapolis, they’ve upped their Twin Cities stop to the 5,000-ish capacity Roy Wilkins Auditorium.

While the world will have to wait until the end of May for the full length, The National just dropped a hot new joint today with the first single from Trouble, entitled “Demons.”


The band has described the album as having a “visceral” sound to it. While “Fake Empire,” the first single from Boxer was a slow burning build up, and “Blood Buzz, OH,” the first single taken from High Violet was an honest to god, fist pumping anthem, “Demons” is neither of those things. That doesn’t mean it’s an odd choice for a single. It means that it’s a song that once it begins-- you are in it, similarly to “Anyone’s Ghost” from High Violet.

Berninger’s lyrics strike up a fine balance between dramatic and humorous, and “Demons” is no exception. The opening verse is a very long list of anxious shortcomings-

I get this sudden sinking feeling,
Of a man about to fly.
Never kept me up before,
Now I’ve been awake for days.
I can’t fight it anymore,
I’m going through an awkward phase.
I am secretly in love with,
Everyone that I grew up with.
Do my crying underwater,
I can’t get down any farther.

Whether it is true to life, or a character that Berninger has opted to play—an exaggerated version of himself, maybe—there’s no resolution in “Demons.” After the pity party and wallowing in his problems, Berninger decides he “can’t rise above it.” The refrain of the song is simple, and heartbreakingly accurate—“I’ll stay down, with my demons.”

When I walk into a room
I do not light it up.
Fuck.

Another example of the brilliant throw away lines that Berninger is capable of rattling off without batting an eyelash, casually sprinkling them within the rest of his hyper-literate style of songwriting.

Musically, “Demons,” doesn’t stray too far from that “National” sound—a sound that has grown bigger with each record—they’re not writing material that accommodates a brass section. They’ve certainly come a long way from the sloppy alt-country leanings of their 2001 self-titled record.  Trouble is self-produced, with assistance from prolific mixer Craig Silvey. The production here gives each instrument clarity—the dueling guitars from the Dessner twins. But with each subsequent record, it’s obvious that The National are a drummer’s band. Percussionist Bryan Devendorf, along with Berninger’s lyrics and unique speak/sing delivery, are the two main elements that allow The National to transcend the indie rock dregs. 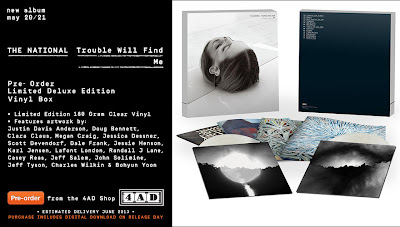 Trouble Will Find Me drops on May 22nd, courtesy of 4AD. On midnight tonight, it will be available for pre-order from the iTunes store (don't ask.) Physically, it will be released on compact disc, 2xLP, and a special deluxe edition of the 2xLP that comes with a ton of extra artwork, but won't be available until june.