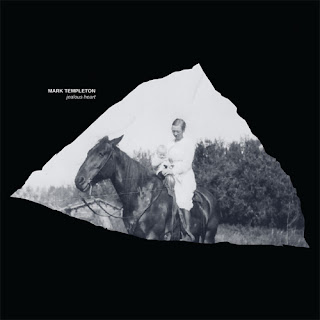 I feel like in reading some early press for Mark Templeton’s new joint, Jealous Heart, it compared his work to that of William Basinksi. I thought with a comparison like that, what’s not to love?

There is plenty to love about Jealous Heart if you a fan of experimental music. But after a few listens, I don’t see much comparison to Basinksi. I do see many comparisons that can be made to Daniel Lopatin’s Oneohtrix Point Never project, specifically the album Replica, released in late 2011.

Templeton is a Canadian “sound artist” (his words, not mine), who has been at it for almost a decade. He uses a plethora of techniques and styles on Jealous Heart—tape loops, synthesizers, samples, scattered and fragmented beats, slowed down vocals, field recordings, etc. Each sound is manipulated beyond recognition, and the result is a rather jarring, but interesting experience.

I felt it necessary to bring up the aforementioned Oneotrix Point Never release, Replica, because that record was, as the story goes, created entirely out of manipulated samples taken from $100 worth of bootleg DVDs containing obscure 1980s television commercials. Jealous Heart is, obviously, not created from commercials, but the same “something taken out of context, then placed in a new context” feeling is very present, and many of the songs Templeton has created conjure up a very real, unsettling atmosphere.

Jealous Heart works as a bit of a song cycle—meaning that there isn’t really a specific track of the bunch that works as a single, and in my numerous listenings, there was never a song that stuck out as a “favorite.” It’s a record that is meant to be taken on as a whole. Certainly there are songs that are slightly more listener friendly than others—“Once Were Down” eventually locks into a pretty steady rhythm, and with all of it’s beats and panning synth samples, is reminiscent of something DJ Shadow could produce.

Mark Templeton- "Once Were Down"

Other tracks, like “Kingdom Key,” are most definitely not accessible to a casual listen—it’s two minutes of rewound tape loops, and a slowed down vocal sample that is actually downright frightening to hear.

Another example of Jealous Heart’s song cycle design is that it eventually begins to reference itself—and it took me a few listens to finally piece that together. I was sent the mp3s for this album because there was lengthy delay in pressing the vinyl and shipping it out. The files were not numbered sequentially, so it went into my computer in alphabetical order. It was I think maybe on the third or fourth serious listen when I realized that this was the case, and then things began to make more sense.

There are elements that are found in the first half of the record—in the opening track “Buffalo Coulee”—that are reprised in the second half, in the track “Flat3.” This is the most obvious example of this, but throughout there are mournful sounding horn samples, connecting earlier pieces with the album’s final moment “Straights.”

Once I was able to correctly wrap my brain around the way Jealous Heart works, it became a really interesting and immersive listening experience.