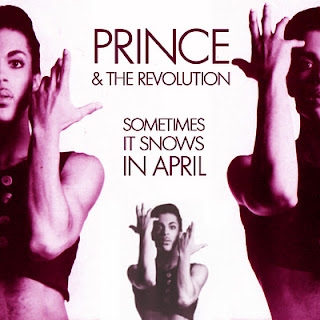 This isn’t the first time it’s snowed this month. In fact, it’s snowed a somewhat alarming amount this month. The first day of spring was a month ago, and every time the temperatures warm up just enough to melt what snow cover there is on the ground—it begins to fall again.

Sometimes it snows in April.

I don’t consider myself an expert on the music of Prince Rogers Nelson. I guess I’m not even sure if I would consider myself to be a “fan” of Prince. Since I am originally from the 80’s, growing up, we had the Around The World in A Day LP, and I believe that “Pop Life” and “Raspberry Beret” received quite a bit of airplay in the house. Later on, it was his bizarre pseudo-concept album/soundtrack to Tim Burton’s 1989 Batman. I guess I look at Prince this way—he wrote some amazing, enduring songs in the early 80’s, he got super weird in the 90’s, became relevant again in the mid-2000’s, and still pulls a lot of weird stunts—like releasing an album only available at Target, becoming a Jehovah’s Witness and making some borderline homophobic remarks in an interview, et. al.

I feel like at some point, I should have seen the movie Purple Rain—the soundtrack is just so fucking timeless. But it’s never really come up. I have not seen Purple Rain. There was a time when you could stream it on Netflix. And it was totally in our streaming queue. But I think it’s no longer available. And really, who has time, patience, or even the interest in watching movies anymore?

(I don’t, in case you were wondering.)

So I’ve also never seen Prince’s follow up foray into the motion picture industry—the box office disaster and much maligned Under The Cherry Moon. Its soundtrack, Parade, contained the hit single “Kiss,” but aside from that, it, much like the corresponding film, was considered a commercial failure.

At some point, and I really do not recall how, or when, I was alerted to the fact that there was a song by Prince entitled “Sometimes it Snows in April.” It may have been because Seattle-based singer-songwriter Shawn Smith performed a cover of it on his album, Live at The Point—a cover now that is credited as “Untitled” on the track list.

Because Prince is a very giving artist, and certainly doesn’t try to remove his music from You Tube or from other places on the Internet, it took awhile for me to actually hear the song. But thanks to one of the many Internet-based streaming music services, I was able to listen.

Within the film Under The Cherry Moon, Prince plays a gigolo named Christopher Tracy—and spoiler alert; I guess he dies at the end of the movie. Similarly to how the songs from the Batman soundtrack are written from the perspective of various characters—i.e. they are meant to be sung by different characters—presumably “Sometimes it Snows in April” is written from the perspective of someone else in the film.

The song itself is sparse—only an acoustic guitar and piano, with Prince singing, and Revolution members Wendy and Lisa singing backup during the refrain. The Wikipedia entry for the album tells me that the song was recorded in one live take, which is why you can hear benches creaking, and why you can hear fingers sliding across the frets of the guitar.

Taking the song out of the context of the film—as I have to do—it’s really, really sad. It’s song about loss, and just substitute the name of someone you lost whenever Prince mentions Christopher Tracy.  It’s gorgeous, and it’s a surprising turn from an artist like Prince. I mean, here’s a guy who would go on to write a song called “Pussy Control.”

When a song speaks to you, it isn’t difficult to apply it directly to your life. When this happens, it is hard to believe that somebody out there is going through the same emotions that you are, and was able to put them into the words that you never could.

Sometimes it feels like this winter is never going to end. Sometimes it snows in April. Sometimes I feel so bad. Whenever I look out of a window and I see snowflakes falling from the sky, sticking to the pavement, covering the dead grass, I play this song, and I think of my best friend.

My best friend passed away on April 3rd, 2012.  So it’s been over a year, but it seems like it could have just happened yesterday. Every day since then has been extraordinarily difficult. I laugh about how I am “grieving wrong,” because I am not moving forward. I try to think of the happy times we had together, but I can’t stop myself from thinking about the end—if there was something we could have done differently. It still feels like a bad dream sometimes, like it’s something that shouldn’t have happened.

So after listening intently to this song maybe two times, it was very easy for me to find myself, and the memory of my friend, within it.

This month, some of my Facebook friends have referenced this song in their status updates, primarily because of the weather.  And I’ve used the unreliable resource of Grooveshark to post this song to my own wall every time the weather takes a turn. But underneath the joke, for me, this song is absolutely devastating.

The current weather forecast predicts temperatures in the 60s and 70s by week’s end. But sometimes it snows in April. Sometimes I feel so bad. Sometimes I wish that life were never ending. Every day that goes by is another day without my best friend. And every song about loss that I listen to becomes another song about me. There’s little resolution in “Sometimes it Snows in April”—the final line of each refrain is “All good things, they say, never last.”

And as I listen to the song again, hearing the final pluck of the acoustic guitar, and final piano keys fading away, I am left wondering what kind of resolution there is for me.