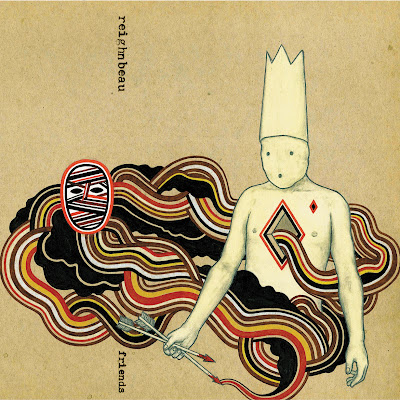 Reighnbeau, whether it is intentional or not, make some pretty sinister sounding music. I think it has to do with the downcast vibe that just radiates from them, as well as the unsettlingly whispered vocals of frontman Bryce Hample.

Hample hails from New Mexico, which is not really the kind of place that you would associate with music like this. After two excellent full-length releases—2010’s self-titled, and last year’s Ashes, Reighbeau are back with Friends, a short set of sparse, acoustic tunes.

Friends is a bit of a reissue actually. It was self-released by Hample last spring in a very limited batch of cassettes that are long gone now. But he was unhappy with how the entire project turned out—the mastering of the tracks, lack of attention it received, etc. So Kevin Greenspon’s Bridgetown Records has remastered and released it as part of their spring 2013 batch of cassettes.

That’s right. This is a cassette release. Just deal with it.

You could describe Reighnbeau as “slowcore” (yes, that is a genre of music.) and they are known to have some shoegaze leanings. It’s easy to hear that in some of their other material—specifically, the incredible 2012 single “Splinters.” Ashes was a very cavernous affair, where the reverb in the room acted as if it were a band member. But on an all-acoustic release such as this, it’s easy to forget about that. The songs are not bound by the traditional confines of the shoegazing genre, which gives this set a refreshing sound.

Friends also works as a bit of an experiment in brevity. Of the nine songs, only two of them go over the three-minute mark. There’s no real reason for them to be extended out any longer—they get their point across in the allotted time. But the ending sometimes comes on too quickly, leaving you with the desire for more—like on the second track, “Whittle.”

The aforementioned “Splinters” shows up here in an extraordinarily stripped down format—this along with the opening track, “Blood,” are stand outs when it comes to setting up the “sinister” vibe I mentioned before. The tape’s longest track, “Harmony,” showcases some intricate guitar string plucking, which can actually sound quite beautiful, and reveals another level just beneath the darkness that’s on the top.

Reighnbeau make fall/winter music, so it’s a bit odd listening to this in the spring. Friends is an evocative collection of songs of a band that continues to draw influence from a variety of genres, yet refuses to be defined by just one.

Friends is a co-release between Bridgetown Records and Grey, and is available now as a free digital download, or as a limited edition cassette.