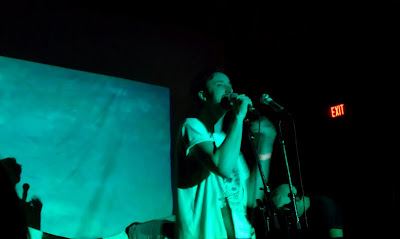 How does one even describe the experience of seeing How to Dress Well perform live? If you weren't there to witness it first hand, anything you hear about it may come off as an exaggeration or simply as hyperbole from a star-struck fanboy, standing right in front of the stage.

Monday night’s show at the Triple Rock Social Club in Minneapolis was my second time seeing HTDW live—the first being what I believe was his first time performing in the twin cities in December of last year at the 7th St Entry. The Entry holds roughly 200 people, and by the time Tom Krell and co. took to the stage, the venue was pretty packed. The same could be said for the turnout at the Triple Rock—a venue that holds roughly 400.

I would use expressions like “life affirming,” and “a religious experience” to describe what happens when Krell is on stage. If you don't believe me, just look up any of the poorly recorded fan videos on You Tube. Even when filmed with a mobile phone, you can tell that How to Dress Well is the real deal. Krell performs with emotions that are beyond raw, opening himself up completely on stage. Watching him tear through an 11 song set, comprised primarily of material from his 2nd LP Total Loss, was an emotionally draining and cathartic experience.

Krell used to live in Minneapolis, so this show was a bit of a homecoming for him, and he had a lot of close friends in the crowd that got some shout outs and song dedications.

And then there’s me.

Last fall, for reasons that I choose not to elaborate on, I had some of the lyrics to the song “Ocean Floor for Everything” tattooed on my forearm. After I had it done, I thought jokingly, “This should get me into any How to Dress Well show, for free, no questions asked.”

In December, after he was finished performing at The Entry, Tom Krell was outside having a smoke, and my friend Chris kept insisting that I approach him and show him my tattoo. Sheepishly I did, and his reaction was priceless—letting out a loud “Oh shit! That’s so dope!” and grabbing one of his friends to take a picture of us together, with my forearm prominently featured. It was then that he said that because of my tattoo, I could get into any of his shows, any time I wanted. 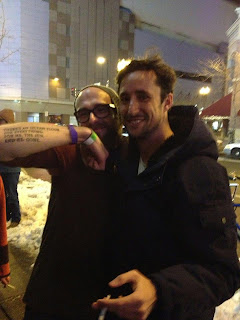 (me and my pal tom krell. please don't be jealous)

About a month prior to his show last night in Minneapolis, I emailed him and explained who I was, and I said that I would have no problem spending the $12 to get a ticket, but I wanted to see if he was totally serious about me getting in for free. He was. And with that, I was on the How to Dress Well “+1” list.

As his set headed towards the end, much to my surprise, Krell looked at me when introducing “Ready For The World,” and said, “This one is for Kevin.” “Ready For The World” on its own is an incredible song—his first single, actually, from 2010—but when he performs it live, mid-way through the song, he segues into the R.Kelly song “I Wish.” I’m not sure how he knew—or if it was just my luck—but his cover of “I Wish” means a lot to me personally, so I couldn't believe what was happening. Even in the last four months since seeing him perform this song at The Entry, it’s taken on a life of its own—growing longer, becoming louder and more unhinged as it continues.

For an artist with such heavy songs, Krell attempted at times to keep it light with the between song banter, telling a story of how he hung out with R&B singer Maxwell in New York, and about a dream he had where his tourmate Sky Ferrara was friends with “Celebrity Chef” Guy Fieri, and how incredible he thought that was within his dream since their names are so similar.

The first half of the set was well balanced with some of his smoother jams, like “Running Back,” and the single “& It Was U,” mixed in with the more emotional tracks like “Suicide Dream 1,” and a new song that has become a staple of his live set entitled “No More Death.”

The second half of the set started with the surprising inclusion of the song “Talking to You”—one of my favorite songs from Total Loss—a song that is extraordinarily difficult to perform because Krell is singing a duet with himself. Following that came the aforementioned “Ready For The World,” followed then by “Ocean Floor For Everything.”

The set began to wind down with an acapella cover of Janet Jackson’s “Again,” where Krell walked away from the microphone and stood at the edge of the stage, singing out into the crowd. This was followed by the emotional final song “Set it Right.”

During many of the songs, Krell addressed the soundman, imploring him to turn up the volume louder and louder. From the front of the stage, it was tough for me to tell if it ever reached the acceptable volume he was looking for.

Noticeably missing this time was bandmate Cameron Reed—who handled drum machine programming and keyboards at December show. Krell was only joined this time by his friend Aaron, who kept busy running laptops, various keyboards and drum machines, and on top of all that, playing the violin.

For an artist that has many intimate, quiet moments within his music, I was very concerned about the crowd’s respect, or more so the lack thereof—constant chatter amongst audience members is a problem at any concert. In testament to how captivating of a performer Krell is, there was little to no talking during songs—which was especially noticeable during “Again.”

There was a moment, as the intro to the opening song “Cold Nites” was playing, that the “Teen Girl Squad” as I had dubbed them, standing next to me, was talking amongst themselves. I’ve been to many concerts before, and I have always had the urge to tell someone to be quiet during the show, but never followed through. After about 10 seconds of realizing that they weren't going to stop, I lowered my head down towards them and asked them, politely of course, if they could be quiet. After some surprised looks from their faces, they complied.

After his set ended, I made my way through the crowd to grab a t-shirt from the merch table—dropping $15 on a shirt is the least I can do for a dude who let me in to his show for free. Krell started to make his way through the crowd over to the table, where we exchanged a few words and hugs. As my friend Scott and I exited the venue to walk back to his car, I still had a hard time believing that someone who I consider to be famous knows me, knows my name, and dedicated a song to me.

Judging by the crowd at the Triple Rock, the audiences are only going to grow, and that means that the venues will be getting bigger. For an act that performs so intimately, I can’t fathom seeing How to Dress Well in anyplace much larger. If you ever have the chance to go see Tom Krell perform live, you need to clear your schedule and do it. It seriously is an experience like none other.

I am sorry though that you will more than likely have to pay to get in, and that you probably won’t have a song dedicated to you.