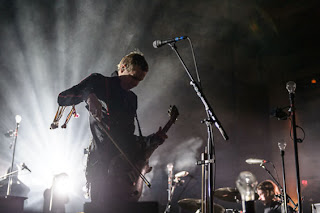 (i stole this photo from the city pages write up about the show. their writing may be absolute shit, but they have a press pass...)

For the most part, I tried to ignore the lights of the concession stand, and I tried to look past the giant Michelob Golden Draft banners hanging on the walls—but it was near the end of Sigur Ros’s set when a gentleman two rows ahead of me came back to his seat holding a sack of popcorn in one hand, and a hot dog covered in toppings in the other—it was then when I couldn’t help but wonder what we were all doing here.

First thing’s first—let’s all take a moment to learn the correct pronunciation of the name Sigur Ros. Many people pronounce it “See-Gur Ross.” But that’s not correct. It’s actually “See-Hur Ros.” The “Ros” is said very quickly, and the “G” has more of an “H” sound. And while we’re at it, the band’s name, when translated out of the native Icelandic, means “Victory Rose.”

Were you even aware?

It would seem that Sigur Ros have achieved what one could call “stadium status.” Four and a half years ago, the last time they rolled through the Twin Cites, they played at the Orpheum Theatre—a “classy” venue one would say. The Orpheum holds around 2,500, and it’s all seated. It’s a “historic” theatre, built in 1921, restored about twenty years ago, and is one of three “historic” theatres in the Hennepin Theatre District, in downtown Minneapolis.

The Roy Wilkins Auditorium—excuse me, the “Legendary” Roy Wilkins Auditorium, holds a little over 5,000. It was constructed in 1932, and was re-named after Wilkins—a civil rights activist—in 1985, four years after his passing. The Roy is part of the congested St. Paul River Centre complex, and most well known as being home to the Minnesota Roller Girls.

Upon entering the lobby for the auditorium, there were beverage vendors posted up before you could even walk past the merch table—“Beer here. Get your ice cold beer here,” they informed us. Yes. Because ice-cold beer, and music for Iceland go so well together.

Depending on how hard you wanted to be monetarily assaulted by Ticketmaster, there were there tiers of seating—the General Admission Balcony, where we were—a free-for-all starting in row H; the Reserved Seating Balcony, assigned seating covering rows A through G; and last, the Main Floor, which was standing room only. Why anyone would want to stand for, like, two hours, and listen to Sigur Ros, is beyond me. No matter how hard they play, this is a band that is best suited to sitting, listening, and watching.

The show started at 7:30 on the dot with a half hour opening set from Daniel Lopatin, performing on his moniker of Oneohtrix Point Never. Playing behind the scrim used to cloak the stage, Lopatin stood in front of a table with lots of devices on it, generating sounds from them. His recorded material, as my wife was quick to point out, is more interesting to listen to then the curious noises and erratic rhythms he was generating—it was tough to tell if these were new pieces of music he had crafted, or if he was just improvising his way through his allotted thirty minute set. The crowd, still filing in, was uncertain what to make of him. There were odd bursts of applause when he would take a quick break between pieces. My wife and her cousin chatted about their projects at work, and I was receiving text messages from either our rabbit-sitter, or from various friends who were also at this concert. The crowd, as a whole, seemed to ignore Lopatin completely, talking amongst themselves while he made strange noises and shifted back and forth behind his table of gadgets.

The whole thing was reminiscent of when I saw Radiohead ages ago—DJ Kid Koala opened—and when he came out on stage, all he said was, “I’m going to play some records the wrong way for you. Listen if you want.”

The change over to set up all of Sigur Ros’s equipment takes exactly a half hour—during which William Basinksi’s “Disintegration Loop 6” plays. At precisely 8:30, the house lights dimmed, and in the darkness, the band took to the stage.

To say things get “real” when you see Sigur Ros perform live is an understatement. Within the first two songs alone, I think I said “Oh shit!” at least four or five times. The band, currently touring in support of their 7th full length LP, Kveikur, which apparently means “Candlewick” in Icelandic—an album that isn’t even out yet. Their stage show, which seems to grow more and more elaborate with each tour, is now based around arena/stadium/auditorium logistics.

For the first two songs, the band—a core trio now, supported by like eight other people—are completely hidden by a white scrim. From where we were sitting, it’s like they were playing inside of a cube. During the moody opener, a new song called “Surface,” all kinds of crazy visuals were projected directly onto the scrim, as well as on a giant curved video screen that ran the entire stage width in back of them. 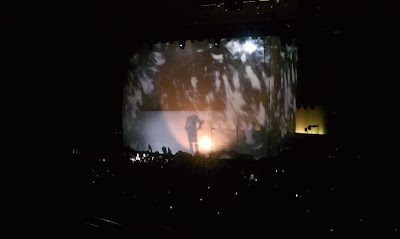 (sometimes we play inside of a cube.)

Due to the ridiculous technical aspects of this show, the band rarely changes up their set lists from night to night—occasionally changing the order of one or two songs, but never straying from the 14 songs they’ve selected to play. Second in the set, every night, is the oldie, and fan favorite, “New Batteries,” a song that begins with frontman Jonsi bowing the shit out of his electric guitar, creating cascading and terrifying waves of feedback.

Still hidden behind the scrim, the band played with light and shadow, as the song builds towards it’s infamous climax—and on command, the scrim dropped to the floor, revealing the band, as strobe lights blinded everybody watching.

Throughout the show, the band proved it knows how to structure a setlist, swapping loud, earthshaking songs, with quiet introspective numbers, and then bombastic pop-oriented crowd pleasers. Personal favorites (and slow jams) “Vaka” and “Fljotavik,” were moments when the crowd was most restless—people getting up and going to grab another ice-cold beer, or to use the bathroom. Loud as fuck classics like “E-Bow,” and the new joint “Candlewick,” struck fear and awe, combining noise and lighting to create a sensory overload. Popular singles from the band’s 2005 effort Takk…(Thanks), “Lost at Sea,” and “Hopping into Puddles,” drew the most cheers from the crowd when they began.

When listening to Sigur Ros on record, it’s easy to forget that the music is being made by real people—not otherworldly beings who are blessing us with their presence. The sheer sight of seeing regular ol’ people, people of Earth, on a stage, making all of this happen, is enough of a special effect that the lights and projections and all the crazy shit that happens is just an added bonus.

A strange, humanistic moment occurred during “Hopping into Puddles.” Just getting into the song, Jonsi made some kind of mistake, and obviously flummoxed, stepped away from the microphone, trying to alert the other ten people on stage to stop playing. Eventually the band figured out something had gone wrong.  The crowd oddly cheered at this gaffe—I kept waiting for Jonsi to say, “Guess what ya’ll? We fucked up.” Instead he just mumbled “my fault,” and then eventually, “Let’s try this again.”

As the set drew near to the end, oldie “Olsen Olsen,” and the epic “Festival” brought everything to a fever pitch. The band closes every show with their new single, “Brenninsteinn,” which means “Brimstone.” And holy shit—they aren’t kidding about the brimstone.

The word on the street about their forthcoming new album is that it is more “aggressive” than previous efforts—“Brenninsteinn” is absolutely punishing. The bass alone was rumbling my organs. The band members each unceremoniously walking off stage when their contributions are finished—only the string and horn players were left out there by the end.

After their techs reset some of the equipment, and after the crowd continued to applaud for more, Sigur Ros sauntered back on stage for a two song encore—starting with another Takk… favorite, “Glowing Sole,” then bringing things to a ridiculous close with the twelve minute “Popplagio,” or “Pop Song,” the final track from the band’s moody 2002 joint ( ).

Prior to the show, I had read a lot of negative things about the Legendary Roy Wilkins Auditorium—mostly that it lacked character, and that the acoustics were god-awful. The band sounded surprisingly clear—if not, like, way too loud at times. There were a few moments when things got lost in the mix, and everything was enveloped in a wall of noise, but the band’s sound technicians were able to maintain a balanced sound throughout most of the show.

The Roy does lack character—pre-show talk between my wife, her cousin, and myself consisted of discussing the high school auditorium vibe it gives off, and the gigantic concession stand residing in the corner. Icelandic post-rock doesn’t really seem like the right kind of act to book in the venue—but this is also a band that just played Madison Square Garden days prior to coming to St. Paul, and it’s also a band that are playing venues that have the words “Verizon Wireless,” and “1st Bank” in their names.

Maybe I’m not used to stadium/arena/auditorium shows. The last time I went to something in a venue this big was the New Kids on The Block and I was seven years old. I found the restlessness of audience members to be distracting. Sure when you have to use the can, you have to go. But do you really need to buy a hot dog AND a sack of popcorn? Do you really need to get another cup of ice-cold beer and spill a bunch of it as you make your way back to your seat? I guess the “come and go as you please” mentality of some of the audience was just confusing to me. 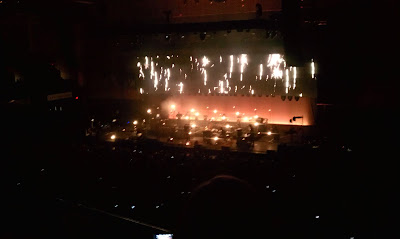 (one of my other attempts at taking a photo with my phone, sitting really far away.)

When I was a young man, in college, I learned about the “Elements of Drama,” as established by Aristotle. In order, they are: Theme, Plot, Characters, Language, Music, and finally Spectacle. A successful and well-done play uses them in that order. Broadway musicals, for example, usually shuffle the order a bit. I think if you looked closely, you would find all six of those at a Sigur Ros show. Obviously Music and Spectacle are first, and eclipse everything else, but you’ve got Language—Icelandic, sometimes a made up language called Hopelanic; Characters—Jonsi’s stage presence is captivating enough just on its own; the Plot, or Action, is the ebb and flow of the various sonic landscapes each song creates—from the bat shit insane feedback, to the most quiet introspective moments; and finally, Theme—the music of Sigur Ros conjures up so many ideas and emotions—they can be joyful, they can be devastating, they can shake you to your core.

If this was your first time seeing Sigur Ros live, how shook are you? I bet your mind is still reeling from what you witnessed. Even if it isn’t your first time seeing them, the band is constantly changing its stage show, so even if you have heard the same songs played at different concerts—you are still seeing something new each time. In THIS economy, $60 for concert tickets is, you know, kind of a lot. But for the amount of work it takes to put on a show like this, it’s worth every penny.

Sigur Ros is still currently on tour throughout most of 2013. Their new album, Kveikur, is available on June 19th, courtesy of XL Recordings.