Review: David Bowie- The Next Day 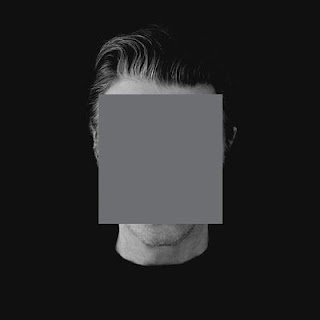 In a year of surprise album releases—like My Bloody Valentine, the promise of a new D’Angelo record, and Justin Timberlake to a much lesser extent—the return of David Bowie came as quite a shock. It’s been exactly a decade since he released any new material, and nine years after an on-stage heart attack canceled the rest of his tour in support of 2003’s Reality. Most people seemed to think he had just gracefully faded into retirement, popping up in trendy New York clubs to catch buzz bands, or lending backing vocals to TV on The Radio. Or for Scarlett Johansson.

On his birthday this year, he announced he’d be releasing The Next Day, an album recorded pretty much in secret with longtime collaborator Tony Visconti. The first taste of the album was the slow-burning, somber jam “Where Are We Now?”—a puzzling choice for a first single, according to Visconti, who assured people that this was a “rock” album. The second single, “The Stars (Are Out Tonight)” proved that point. But with two drastically different songs—what could you expect from the full album?

In preparing to review The Next Day, I was looking at some general reviews of the last few Bowie records, from 1999 on to 2003—and in every review, the phrase “It feels like classic Bowie, but it doesn’t recall any particular era of his career” is used. I don’t know how someone is supposed to take that—either it’s good, and that Bowie is timeless, or it’s bad, and that it’s like “This record sure sounds like a record made by David Bowie, late into his career.”

The same, I guess, could be said about The Next Day. It certainly is a David Bowie record—Visconti’s production is clean, akin to sound achieved on 2002’s Heathen and 03’s Reality. Musically you can’t pin The Next Day down to any specific era of the Bowie canon, but there are certainly elements of the past in every song. Vocally, Bowie shows his age slightly, but sounds great for a dude well into his 60s.

The cover art for The Next Day was baffling to many. It is the cover to his iconic 1978 album “Heroes,” but with the title crossed out, and a white square covering his face, with The Next Day written inside of it. There were obvious allusions to Berlin, and his time in Berlin in the late 70s in the first single, “Where Are We Now?’ so there was a feeling that this was not so much a sequel, but a response to “Heroes.” In listening to the album a number of times, I can say that is not the case. 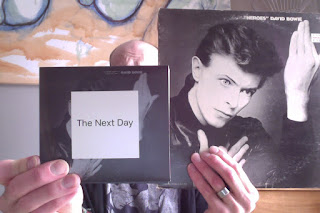 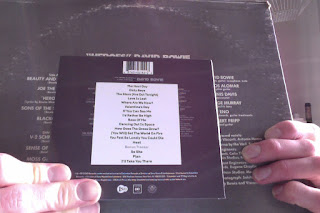 (comparing The Next Day packaging with the original vinyl sleeve for "Heroes."
you crazy for this one, bowie!)

The album gets off to a bit of a rocky start—the very up-tempo opening track, also the title track, involves an obviously self-aware Bowie shouting: “Here I am, not quite dying, my body left to rot in a hollow tree,” alongside strangely warbled versions of his own voice, backing up. The second song, “Dirty Boys,” creeps along with some nice saxophone bursts—strangely enough, not played by Bowie, and some unhinged guitar theatrics, but overall the song falls flat.

Things pick up when “The Stars” arrives, and the three songs that follow, are quite incredible—specifically “Valentine’s Day,” a song that captures the essence of mid-70s Bowie, combining the Plastic Soul of Young Americans with the rock aesthetics of Aladdin Sane—it’s a well dressed song hiding super dark subject matter. After that, things take an interesting turn back to Bowie’s 1997 infatuation with Drum And Bass music. “If You Can See Me” recalls the sound of Earthling—propelled forward by frenetic percussion and an unrelenting synthesizer.

The second half of the album is a bit hit or miss. None of it is “bad” per se, but some of the songs work better than others. “Boss of Me” works because of the music, not so much the lyrics. “How Does The Grass Grow?” plods along, sounding familiar to possibly some Diamond Dogs-era Bowie, and works because it’s a well crafted song, although at times, Bowie sounds a tad bit out of breath—again, a sign of showing his age. “(You Will) Set The World on Fire” tries for a big sounding anthem for the record, and “Dancing in Space,” while very modern sounding, evokes memories of the 1980’s dance oriented Bowie material that his fans turn their back to, and he even went on record apologizing for.

The final two songs on the standard edition of the album, “You Feel So Lonely You Could Die,” and “Heat,” bring things to an interesting close. On the former, you can hear faint echoes of “Five Years,” the opening tune off of Ziggy Stardust, and one of my all time favorite Bowie joints. It never reaches the manic heights that “Five Years” does, but there’s no need for that. The faint echoes throughout the song turn into a full fledged tip of the cap in the final moments of the song as a very familiar sounding drum beat comes in. The latter shows off one of the things Bowie does best—creepy final songs. “Heat” is unsettling, and contains bizarre lyrics like: “My father ran the prison. I can only love you by hating him more.” The strange thing about “Heat” is that it never really takes off—for four minutes, you are waiting for it to go somewhere else—a sonic explosion, something. But no. It just slowly fades away as eerily as it arrived.

For those hardcore Bowie fans, The Next Day is available in a special “deluxe edition” that includes three additional songs. The first of which, “So She,” is a strange hybrid of 1950s-era country & western twang, and a very contemporary dreamy feeling. You’d think that this would come off like a train wreck, but it actually works well, but it’s easy to see where it, as well as the other two bonus songs, didn’t fit in with the official 14 songs of the album’s track list.

The second bonus song is an incredibly heavy instrumental piece—“Plan” may sound familiar to you if you watched the terrifying video for “The Stars (Are Out Tonight)”—this is the music that plays at the start of the video when the characters are being introduced. The fact that it is an instrumental track reminded me of much of the music on Low, as well as on “Heroes.” On Low, however, Bowie openly admitted to writer’s block—the music had been recorded already, and as he stepped to the microphone, he found that nothing was coming out. The final bonus track, “I’ll Take You There,” a fairly up-tempo, straightforward rock song, with Bowie shouting the chorus: “What will be my name in the U.S.A?”

On the album’s true closing track, “Heat,” the lyric “And I tell myself I don’t know who I am,” is repeated throughout. That’s an interesting choice of words in a lot of ways, and maybe it was done intentionally. Throughout his 40-year career Bowie hasn’t stuck with any one sound for very long. He went from being a singer-songwriter, into glam rock, into plastic soul, into post-rock, into an ill-advised dance oriented phase in the 80s, into industrial, Drum And Bass, to kind of reaching a peak of finding a way to blend elements from each to create a “Bowie” sound for the modern age.

He’s created various characters to play—the most famous, Ziggy Stardust, Halloween Jack from the Diamond Dogs-era, and then The Thin White Duke for Station to Station.

In 2013, who is David Bowie? He is obviously someone who is “with the times,” as they say. He’s 100% embraced the digital music age—the “shop” link on his website takes you to a page where you can either pre-order The Next Day from Amazon, or from iTunes. Both singles from the new album were made available exclusively in the iTunes store, and the album itself was made available to stream from start to finish within the store for a limited time. Similarly to the disappointment of an artist like My Bloody Valentine—audio perfectionists, waiting 22 years to release a third album—deciding to release it digitally first. So the first time anyone listened, it was to a shitty, compressed 320k mp3.

Streaming The Next Day is not how I envisioned listening to it for the first time. But the concept of driving to a record store on a Tuesday to pick up a new release and listen to it in a c.d. player or on a turntable is, for the most part, an old fashioned ritual.

About five years ago, my wife and I got REALLY into Bowie—purchasing his entire canon from 1971 to 1980, and then 1993-2003. We bought a rather large poster of the “Heroes” cover art, and it’s been prominently featured in anyplace we’ve lived. The entire concept of a new David Bowie album is still taking awhile to sink in for me, even though I’ve had two months to mentally acclimate myself to the idea.

The Next Day is not a groundbreaking album, nor is it an urgent album. Even though it is flawed at times, it is solid from start to finish, and an artist like David Bowie certainly didn’t need to make a “comeback” record. With many older artists, a new release comes off as forced and full of filler. When an older artist tours, people who come to the show want to hear “the hits,” and they could give a shit about new material. It never feels phoned in, or like a cash grab. There are no plans to tour behind it, and he’s not even willing to give interviews—only letting Tony Visconti speak for him w/r/t the album. It’s a late in the game surprise, and it is comforting to know that Bowie is still interested in making music, and making interesting music, at that.