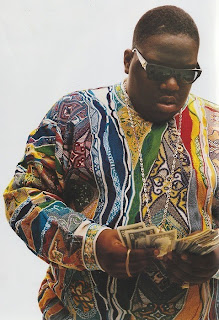 I don’t wanna live no more.
Sometimes I hear death knockin’ at my front door…

To put things into perspective, Christopher Wallace, AKA Biggie Smalls, AKA The Notorious B.I.G. would have been 41 this year. When he was killed in 1997, he was only 24 years old.

Similarly to Jeff Buckley, Biggie only released one album while he was living—1994’s Ready to Die. The follow up, the double LP Life After Death was completed prior to his passing, but not released until two weeks after. Both album titles, obviously, send a chill through you when you think about it—again similarly to that of Jeff Buckley, and Nick Drake—these artists, from different worlds, but all hyper-aware of their own mortality, and at times prophesized, or at least alluded to, their own death within their works.

Those who are well versed with Ready to Die are probably aware of this fact, but in one listen you can tell that the record was recorded over a long period of time—a bulk of it is dedicated to Biggie’s street persona; dealing drugs, killing people, et. al. Then there are the radio-friendly songs, recorded later on after Sean “Puffy” Combs was let go from Uptown Records, going on to found Bad Boy—songs like “Big Poppa,” “Juicy,” almost seem out of place on a record with content as flat out violent and ridiculous as this. Then there’s the ridiculously smooth remix of “One More Chance,” released eight months after the album dropped is practically unrecognizable when compared to the original. By today’s standards, the content of Ready to Die has transcended being “shocking,” and now it comes off as cartoony and self-satirizing. But in 1994, this was meant to be taken seriously.

The Notorious B.I.G.- One More Chance/Stay With Me (Remix)

18 months were spent recording the follow up to Ready to Die—during that time Biggie was at the forefront of the bi-coastal feud of the East Coast and West Coast hip hop scene—Tupac Shakur assume the same roll for the west. They both made diss records against one another—Shakur calling out Biggie in numerous songs, also claiming that he was bedding Biggie’s estranged wife Faith Evans. Biggie striking back with the now classic “Who Shot Ya?” a song directed at Tupac after he had been the victim of an attack in 1994 that left him wheelchair bound. 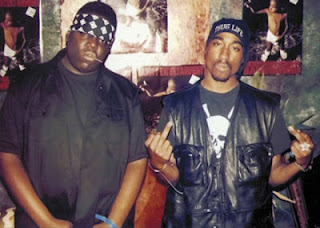 The story of these two men, who at one time were friends, ends very badly, as everyone is aware. Tuapc, at the age of 25, was shot in Las Vegas, dying six days later. Biggie, at the age of 24, shot in Los Angeles while doing promotion for his soon to be released second album, the now aptly titled Life After Death.

Life After Death, fittingly enough, was posthumously released two weeks after Biggie’s death. A double LP, it is most known for radio hits like “Hypnotize” and the Diana Ross sampling “Mo’ Money, Mo’ Problems.” By 1997, while Biggie tried to maintain his edge and street credibility on a song like “Kick in The Door,” Puffy had already donned the shiny suits, waving his diamond-encrusted Rolex at the fish-eye lens of the camera filming his music video. The production values of Life After Death are exponentially higher, with Puffy’s pop sensibilities steering the beats into more polished territory.

It sounds insensitive to say that The Notorious B.I.G. died as he lived. Both he and Tupac were unfortunate causalities of a coastal war that never should have happened. They both surrounded themselves with violence. The overlying concept of Ready to Die was birth and death—specifically his birth, ending with his death on the absolutely harrowing “Suicidal Thoughts.” The final song on Life After Death was called “You’re Nobody (Til Somebody Kills You)” for god’s sake.

Like many artists who passed at a young age, you have to wonder what things would be like if they were still here today. Over 40, what could Biggie Smalls be rapping about? The faces of hip hop, and the sound of hip-hop, have changed so drastically over the last 16 years, would there still be a place for him in the landscape? It was in the wake of his death that Puffy Daddy, once the world’s worst Hype Man, became a superstar—going from the guy who was just ad-libbing shit over Biggie’s rhymes to a full fledge media mogul, practically overnight. Puffy is barely known for anything to do with music these days—he’s got a clothing line, and his own brand of cologne. It’s almost unfathomable to imagine Biggie Smalls—a guy who wrote these lyrics:

As I grab the Glock, put it to your headpiece
One in the chamber, the safety is off release
Straight at your dome, homes, I wanna see cabbage
Biggie Smalls the savage, Doing your brain cells much damage

coming along for the ride into the mainstream with Puffy.

Biggie’s image can now be seen on t-shirts you can buy at Urban Outfitters. A biopic, starring HIS OWN SON as a young him, was released four years ago. The time for the widespread interest in “gangsta” rap has come and gone, but the influence of The Notorious B.I.G. remains prevalent to this day. Ready to Die is considered to be one of the greatest hip-hop records of all time, as well as one of the greatest albums of its era—1994 often considered to a “golden age” for the genre. No one in the last 16 years as tried to be the next Notorious B.I.G—nobody ever could. Christopher Wallace was a once in a lifetime talent.