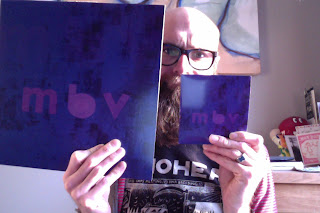 (grande or venti? the choice is yours.)

About a week or so ago, I got a Facebooking from my friend George, who asked my newly arrived copy of m b v came with a broken pen.

Mine did not, and he proceeded to tell me that after he opened the box, after the compact disc sleeve went flying onto the floor, that there was a broken pen packed with his record.

We both surmise that Kevin Shields himself used that pen to write all of the songs on the album.

A long time ago, album artwork was based around the concept of a 12” by 12” square. That’s a pretty big space to work with. Eventually, with the advent of cassette tapes, artwork had to be somehow converted into a 4” by 3” rectangle. Then came the compact disc—a square again, but smaller now: 5” by 5”.

In today’s digital world, album artwork and comprehensive liner notes are a thing of the past. An album cover to many is the little icon that you see when a song plays in your iTunes library.  Digital downloads normally don’t come with liner notes—so your average person isn’t going to read all of the “thank yous” or learn about when and where the album was recorded. Occasionally an album purchased from iTunes will come with a digital booklet—a PDF version of the liner notes. But if you have one of those sitting in your music library, when was the last time you read through it?

No, really, when? I’ll wait while you think.

Where am I going with all of this? As a gigantic music snob/nerd/whatever, I genuinely give a shit about album artwork and liner notes, so that’s why the actually physical copy of My Bloody Valentine’s long awaited third album, m b v, is somewhat underwhelming.

Yeah, remember when the internet broke and everybody collectively shat themselves, and My Bloody Valentine, after weeks of speculation, casually released their new album on a Saturday night?

Like many self-released albums by established artists, the day the music is released, you get it via a digital download, and then you have to wait awhile—sometimes months—for the physical copy to show up. The physical version of m b v, a LP/CD set, was to ship out at the end of February.

Once people in the UK started to receive them, I began to hear reports of how terrible the packaging was. How flimsy the album sleeve was. How awful the artwork was. I thought, could it really be that bad?

It’s not that bad. But it’s also not that good, either.

When my copy arrived at my office, I sliced open the box and opened the flaps, and as I did, the compact disc of the album went flying out of the box, on to the floor. Then there was the LP sleeve—yes, the cardboard is flimsy.  Flimsier than I’d expect—I’ve seen limited run, super small label releases on sturdier material than this.

Then there’s the artwork itself.

Part of the mystique of m b v, aside from the fact that it was 22 years in the making, was trying to guess when these songs were written and recorded. There’s an odd, paradoxical dated-yet-timeless feeling to most of them. The artwork that goes along with m b v is just dated. Not timeless.

There are two different sets of artwork and liner notes. The vinyl sleeve is a gatefold—the inside spread contains minimal information about the album—a track list, and some minor production credits. All of that is set against the backdrop of a colorful yet strange design. I’ve tried to find many ways to describe it, and the best I can come up with is that it appears to be brick walls or buildings imploding into cubism? 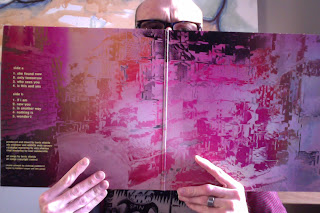 Upon further inspection, it’s fairly obvious that this is just a variation of the design that wraps around the front and back cover.

The compact disc comes in a small envelope, with a short booklet inside. The booklet is filled with images that could have been used as artwork for a Trapper Keeper in the early 90’s. The middle two pages of the booklet appear to have more of this brick design, this time with the hue of the all-familiar Loveless pink and red. The first photo in the booklet is that of knobs on a soundboard—poorly Photoshopped to look “cool.” The artwork seems more akin to some kind of late 90’s techno music compilation rather than something of this magnitude. 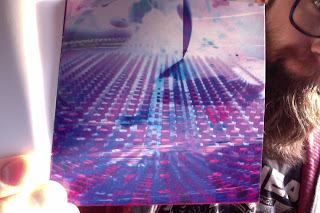 (seriously k.shields. what the fuck is this, son? for real.) 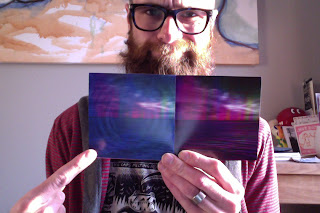 (oh, you you need to borrow a piece of paper? let me open my MBV Trapper Keeper.)

Maybe it’s just because so much time has passed, but the artwork (as minimal as it is) for both Isn’t Anything and Loveless seem to make so much sense with the musical content. This on the other hand, I don’t know.

Moving past the packaging and artwork, m b v in a physical format was worth the money. While a tad anti-climactic after being available as music files for over a month, it’s really nice to have the album on things you don’t have to be on the computer to play. The vinyl obviously has a very full, rich sound—it’s worth noting that in a world where music is reduced to being “mastered for iTunes,” that both the vinyl and compact disc were mastered separately. On the band’s newly designed but already neglected website, attention is drawn to the fact that: This vinyl album has been recorded as an analogue album. It was recorded on 2 inch 24 track analogue tape and mixed onto half-inch analogue tape and mastered with no digital processing involved.  The vinyl is a true analogue cut, i.e. it hasn't been put through a digital process during the cutting process unlike over 90% of all vinyl available today.

Listening to it on both compact disc or on vinyl really add layers that are lost when only listening to the mp3 files in your computer. If you aren’t familiar with the process of compressing audio to create small filesthat fill up your hard drive, an entire book was written about it, and it’s avery interesting read.

When Radiohead revealed their 2007 album In Rainbows and offered it in two formats—either a pay what you want download of mp3s, or an $80 limited edition boxed set—they caught some flack from those who HAD shelled out $80, and while they waited two months for their discbox to arrive, made due with 192k mp3s. The return on investment was relatively worth it once the physical product had arrived, and even six years later, it’s still a conversation stimulator with people who come over to the house and see it on my shelf.

With m b v, you were given choices of audio formats to download—mp3 being the easiest, the others were varying degrees of lossless WAV files that would take up nearly a gigabyte of hard drive space, and required the additional downloading of software that would play things like that. For the $40+ that the CD/LP set cost, I guess I was surprised by how rushed of a production it seemed—especially since the band had 22 years to, you know, make this happen.

Believe it or not, we are living in a post-m b v world. It is still currently available directly from the band themselves, and also it is now available as an import title via indie retailer Insound.