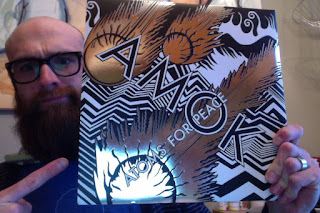 Once Amok has time to be absorbed by the listening public, I am certain it will be compared to lead singer Thom Yorke’s day job—you know, Radiohead. Maybe you have heard of them?

People will beg the question—what’s the difference? They will say that this record sounds exactly like a Radiohead record. But in reality, if you have listened closely to Amok, aside from the fact that both bands share a highly recognizable voice, there aren’t really a ton of other comparisons to draw.

Radiohead does not have a Brazilian instrumentalist.

Atoms For Peace came together in late 2009, when Yorke wanted to assemble a group to play songs from his 2006 solo joint, The Eraser, in a live setting. Obvious choices for the line up included long time Radiohead producer, and unofficial 6th member of the band, Nigel Godrich handling programming and keyboards, and Beck’s drummer Joey Waronker. Not so obvious choices included Flea on bass. Yeah. Flea. The shirtless guy who plays the bass in the Red Hot Chili Peppers. 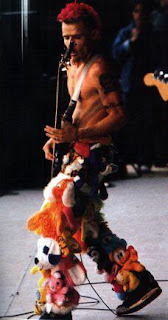 (this fucking guy. i tell ya)

Since forming, there were always rumblings that Atoms For Peace were working on a studio album. The band recorded in 2010, and the sessions were primarily based around “jamming,” or as Yorke has said in an interview, “the product of getting together, getting wasted and listening to Fela Kuti.” The recordings were then manipulated and assembled by Yorke and Godrich over the next two years.

Amok, in contrast to the most recent Radiohead record (or really any Radiohead record for that matter), is a much looser affair. Sonically, there are many similarities to Radiohead in production—specifically with how the drums sound—but this is what happens when the same producer is behind the boards for both bands.

This looseness begins right out of the gate with the opening track, “Before Your Very Eyes…,” a song that wastes no time finding a slithering groove, propelled forward by, you guessed it, PERCUSSION, as well as guitar noodling and warm synth tones.

That is the recipe for most of the songs on Amok, and it’s a recipe that works well. Immediate standouts include “Ingénue,” which features some beautiful multi-tracking of Yorke’s voice, and “Dropped,” a song lead by a strong synthesizer sequence that takes you headfirst into frenetic drumming and…percussion.

The second half of the album continues the very up-tempo vibe—“Reverse Running” takes the guitar noodling and head-nodding beat heard at the beginning of the record, and applies a somewhat serious, downcast feeling over it. That song mixes into the beginning of the title track, also the last track on the album. “Amok” is heavy on the bass, driving by skittering beats and clacks, before it is engulf by synthesizers and Yorke’s overlapping vocals—giving it a strong sense of finality, making it a very fitting closing track.

Much like Radiohead’s last record, 2011’s The King of Limbs, Amok has met with some polarizing opinions. While Radiohead have been responsible for what are considered to be two of the most important records ever (OK Computer and Kid A), and while their every nuance as a band has been overanalyzed—Atoms For Peace is the antithesis of that. It’s Yorke stepping away from a true role in the spotlight—choosing here to blend as much as possible in with everything else. Amok isn’t groundbreaking by any means, but nobody should have expected it to be. It’s Thom Yorke and his love for electronic-based music, making a record with four other guys who are not the usual four other guys he makes music with. And dammit, it sounds like he’s having fun doing it.

Amok was made available in many different physical formats. On compact disc, there was the standard edition, along with a special limited edition that included embossed foil packaging. The same went for the vinyl-- a 2xLP-- which, since we're on the subject of it, is one of the most irritating things. It's a nine song record, and it could easily fit on one LP. But it's on two, with like two songs on each side, and it plays at 45 rpms rather than 33 1/3.

The special limited edition vinyl package was a hefty fee ($35+) and so I hemmed and hawed about when I was going to place my pre-order. By the time I got around to it, the special edition was sold out on both the band's website, as well as their label, XL Recording's site. In a bit of a panic, and also thinking I was going to be buying it along with another, unrelated product, I placed my order with the unlikeliest of places-- Underground Hip Hop dot com. The web storefront for a hip hop record/clothing/lifestyle store in Boston.

Thinking that since it was a pre-order, I'd get it when it came out, I was a little miffed at myself when I found out that wouldn't be the case, and I got it just today. A whole week later. Yes, my life is tragic and full of first world, white person, problems.

As you could tell from the first photo at the start of this entry, the embossed foil LP sleeve is pretty cool.  It also is packaged as a triple-gatefold sleeve, something the standard edition does not include. 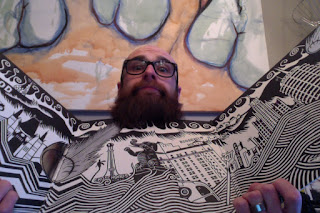 (here's me, trying to catch some rays) 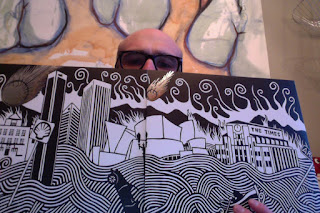 (the individual sleeves for the records themselves)

So was it worth all the hassle? Yeah, probably. This thing is pretty much out of print now, a week after the street date of the album. So you will have to settle for the regular ass edition of this album, available now courtesy of XL Recordings.