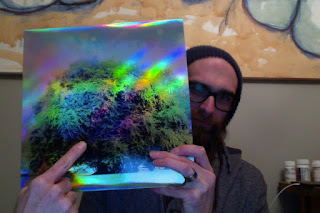 Yo La Tengo have reached a point in their nearly 30 year career where you read a lot of press about that band that includes the word “consistent.”

The band have consistently had the same line up for 20 of those nearly 30 years—James McNew on bass, along with indie rock’s cutest married couple—Ira Kaplan on guitar, and Georgia Hubley on drums. And starting with 1992’s May I Sing With Me? (their first with this line up), the band has consistently put out records roughly every two to three years.

Fade is the shortest Yo La Tengo album in a decade. Clocking in at a concise 46 minutes, it covers all the musical territory you would expect to hear from the band, but it streamlines everything down—the longest songs (the opener “Ohm” and closer “Before We Run”) are only six minutes and change.

Fade in short, is a beautiful record—as many Yo La Tengo records are. It is actually a really good "autumn" record, so it's a shame that it is being released in the dead of winter. It recalls their work from 1993’s Painful, as well as 2003’s Summer Sun; and at times, it can be a very reserved and introspective sounding record. The aforementioned “Ohm” begins rather tensely, with a bit of an eerie synth line, but the tension fades away as soon as the lyrics begin, and Kaplan’s guitar strumming comes in. And even as it descends into feedback guitar solo territory in the second half—the song is very triumphant in sound. The closing track, “Before We Run,” structured similarly to “Ohm,” is the kind of triumphant anthem, building and building as it goes. It features both the string section, as well as brass—something that has been used sparingly and smartly throughout the last few YLT records.

The lead single off Fade, “Stupid Things,” was released on a limited edition 12” vinyl last fall, giving everybody a taste of what they could expect from the new record. “Stupid Things,” as presented here, benefits from additional production and mixing—specifically on the vocals and guitar. Another stand out track is the second on the record, the classic YLT-sounding “Is That Enough,” includes Kaplan’s heartfelt singing on lead, Hubley’s low voice coming in underneath, and a gorgeous string arrangement—something you don’t hear all that often from this band.

You would think that a band with so much consistency wouldn’t still be interesting to listen to. Artists don’t need to reinvent the wheel with every record they put out, but changing things up a little sure helps (Spoon could learn a thing or two about that.) Aside from the overall brevity of Fade, the big difference with this record in comparison to other Yo La Tengo records is that fact that it was produced by John McEntire—of Tortoise, Sea & The Cake, and Broken Social Scene fame, rather than their usual producer Roger Moutenot. A fresh set of ears behind the mixing board, I think, has really expanded a familiar sound.  The songs sound warmer, and fuller, than on previous records.

Fade is unmistakably a Yo La Tengo album. It is as consistently good as their previous efforts within the last ten years (maybe even better) and it would consistently fit into their general canon of work as artists who have matured into a sound, and into their place as one of the first “indie” bands to come out of the early 80s.

Fade is available now courtesy of Matador Records. I have no idea what the compact disc version looks like, but up there is the standard edition LP. Look at how shiny that cover is. JUST LOOK.