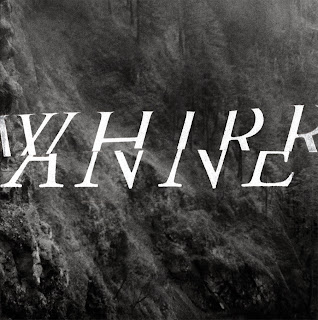 Separated by a drive up the west coast of this country, I heard about the Bay Area’s Whirr, and Portland’s Anne, last year, roughly around the same time. While they have similar influences, I think, Whirr is more of a traditional shoegaze band—in the sense of lowly mixed vocals, echoy and reverby guitars—while Anne fall into a category that I suppose I would call dream pop—shimmery guitars, heavy synths.

Both acts have one full-length release to their name, as well as various singles and EPs, and most recently, they collaborated on a split, double 7” single. What does that even mean? Typically, a split single involves one artist taking the A side, while the other takes the B. In this situation, there are two separate 7” singles—Whirr take the A and B side of the first one, while Anne takes up the first side of the second, and the lyrics to their songs are stamped onto the flip side.

In September it was announced that Run For Cover Records, would be putting out said split 2x7”, with a release date set in October. October came and went, and still no singles—just consolation prize MP3s emailed to me. As it turns out, in this world where vinyl is outselling compact discs, I guess actually pressing vinyl records is very difficult. There was some kind of issue with the stamping of the lyrics into the backside of the Anne single, and the production delay lasted until mid-December.

The reason that this is such a first world problem, or indie world problem, for me is because unless I have a physical copy of a record (vinyl, compact disc, even cassette), I tend to not listen to it as often. MP3s build up on my computer, and are often neglected for months. I don’t have an iPod, I only keep a small amount of music on the SD card of my Smart Phone for travel purposes only, and I really don’t care to sit down at the computer to listen to music.

So unfortunately for this release, it went relatively unnoticed until my copy finally arrived last week. The packaging itself is pretty awesome—a double gatefold, heavy cardstock sleeve houses both singles. The singles themselves are pressed onto white and black marbled vinyl. 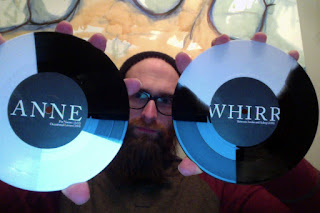 (and yes, my hands are fucking huge.)

Musically speaking, this most definitely benefits from a listen on vinyl. Whirr’s two tracks—“Twist” and “Between Awake and Asleep”—are exponentially more exciting than a bulk of their debut full length, last year’s Pipe Dreams. The songs here are more on par with their impressive EP Distressor. “Twist” showcases their harder edge—that’s what can occur when you have THREE guitarists within the band, while “Between Awake and Asleep” is gorgeous slow motion shoegaze to the core.

Anne’s music has an underscoring of menace to it. Whether that is intentional or not is yet to be determined. It was found on their excellent debut LP Dream Punx, as well as the stand alone single “Power Exchange.”  Perhaps that menace comes from the very thick delay used on their music, or their penchant for heavy synth drones, or heck, even the vocal delivery of frontman David Lindell—who can occasionally sound like Chino Moreno of the Deftones.

Of the two songs contributed by Anne, the lead track, “Pet Names,” is far superior to its companion “Occasional Lovers.” Both songs pack a punch though—far punchier than Whirr. Anne mixes post-punk, a hint of shoegaze, and a dream pop aesthetic for a unique modern sounding take on older generes.

Both of these bands have been gathering some national attention within the last year, but they seem to rarely tour. If they do play shows, it is typically within the west coast. This split shows two young bands that continue to grow musically, so hopefully they can use this to catapult to larger things in the coming year.

This 2x7"split single is FINALLY available courtesy of Run For Cover Records.