Review: Stars of The Lid - The Ballasted Orchestra (Vinyl Reissue) 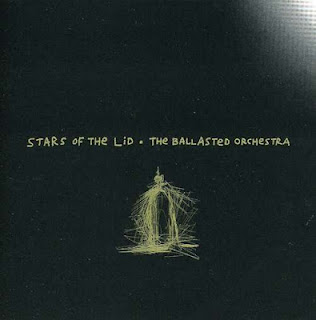 One of the first things I noticed about listening to The Ballasted Orchestra was that throughout the record, it continually crosses, and occasionally blurs the line—many ambient/experimental/drone artists do this. This line I speak of is the difference between the feelings your sound conjures. Some of the record is what I consider to be “reassuring,” or “comforting,” and even at times it is downright gorgeous. Then there are other moments where it creates an awful sense of underlying dread.

Much of The Ballasted Orchestra is seamless, so without really realizing it at first, one track will end, another will begin, and the line between reassurance and dread will be crossed, and then crossed again.

Long out of print on vinyl (the preferred format for music nerds these days) this reissue of the Stars of the Lid’s 1997 effort is excellent. One could say that 16 years seems like an odd anniversary to celebrate with a reissue. But aside from the terror or comfort that this record evokes, in listening, you realize that music like this is truly timeless. The Ballasted Orchestra is a record that could be released today. In fact, many contemporary ambient artists would state Stars of the Lid as a major influence on their sound.

Austin, Texas is not the first place I’d think of for an ambient/experimental/drone duo to hail from originally—but Brian McBride and Adam Witlzie formed in Austin, and they recorded Ballasted there as well.

The juxtaposition between senses is well balanced throughout the album’s nine tracks—this double vinyl reissue includes the LP only extra track “24 Inch Cymbal”—a song that gets cut from the compact disc release due to time restrictions (and also strangely enough from digital versions as well, even though time shouldn’t matter to mp3s.)

The opening track, “Central Texas,” sets the tone with three minutes of an ominous drone, which seamlessly transitions into the ethereal, calming waves of the twelve-minute “Sun Drugs.”

The seamless transitions, and sequencing across four sides, are one of the most impressive things about this reissue. Everything is very nicely worked out within a side—example: the following three tracks, “Down II,” “Taphead,” and the appropriately titled “Fucked Up (3:57 A.M.)” fit onto side two—and these are three songs that segue one into the other.  They are also all genuinely unsettlingly to listen to, each one growing more ominous than the former.

Side three is dedicated to twenty-one-minute piece “Music For Twin Peaks Episode No. 30.” The irony there is that the much beloved cult television show ended after 29 episodes.  The song is split up into two distinct parts—part one being incredibly beautiful; part two, not so much. The dread returns, and the atmosphere created by this section fits right in with “Twin Peaks’” most tense, horrifying moments.

The final side of The Ballasted Orchestra is devoted solely to the closing piece, “The Artificial Pine Arch Song.” And thankfully, “Pine Arch” is a reserved, reassuring, subtly gorgeous way to close this record out. At times, it almost comes off as triumphant sounding—I mean, as triumphant as minimal ambient music can be.

Many would probably say that most ambient/drone records are the kind of thing you put on in the background, and that music like this is easy to tune out. I would wholeheartedly disagree. There’s really no way to check out while listening to The Ballasted Orchestra. I’ve found that it’s actually hard to concentrate on other things while you are listening. Even as I am listening to “Pine Arch” right now while typing this up, I find myself taking my eyes away from the screen, and just letting the music engulf.

Listening requires time—well over 80 minutes; and patience—the longer pieces are slow like the director’s cut of a film about molasses rolling uphill. But it’s totally worth it. Like all well-done ambient music, it is a completely mesmerizing experience.