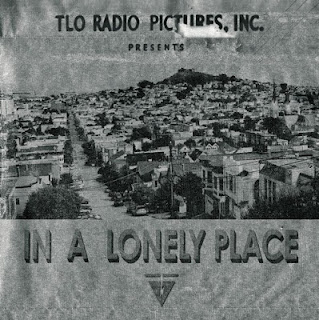 I’m not even entirely certain how I discovered the Tape Loop Orchestra. Presumably, it was during one of my many attempts to find new, and more importantly good music to listen to and write about. And presumably, I was attempting to find an artist who created work similar to that of William Basinski.

In A Lonely Place is heavy stuff. It’s a concept album. It’s exactly 45 minutes long. It’s made up of three pieces—each piece has a title borrowed from an iconic line of dialog spoken by Humphrey Bogart in the 1950 film noir In A Lonely Place: “I Was Born When She Kissed Me,” “I Died When She Left Me,” “I Lived A Few Weeks While She Loved Me.”

The press release for the record states that it is “the surgical exploration of a classic era noir: a descent from glittering surface tension to sinister murky depth. As with all Tape Loop Orchestra releases, the theme is one of decay – a certain blurred focus disintegrating into fragile remembered phrases, echoing the "film’s dive from romantic optimism into malevolent violence.” That may sound super pretentious. And in fact, it is super pretentious. But it is also super awesome. In A Lonely Place is, in a word, incredible.

Similarly to the loops of William Basinksi, the three pieces on In A Lonely Place primarily conjure up sadness. And they each conjure up a different level of sadness in their own way. “I Was Born When She Kissed Me” begins very ominously, but about halfway through, the mood shifts. I won’t say that it “lightens up” at all, but it becomes exponentially less ominous and more somber.

The final track, “I Lived A Few Weeks While She Loved Me” begins with a sound reminiscent of something you’d find on a Sigur Ros album. This song is the longest of the three (22:30) so it has more time to build. Structurally, the loops in the piece reach a peak before they begin to decay. The difference between the…disintegration (for lack of a better word) of these loops, in comparison to the Disintegration Loops prepared by William Basinski is that his were a product of fate—old tapes flaking apart while he digitized them. In A Lonely Place, while giving the feeling of being very organic and improvised, is very premeditated.

The album’s centerpiece, “I Died When She Left Me,” is absolutely phenomenal. This is a song that I could seriously listen to all day long. It’s a shame that it’s eleven minutes long, because this could go on forever and I wouldn’t mind one bit. It’s by far the most heartbreaking of the series to listen to—slow strings and bowed xylophone, eventually being overcome by tape hiss and distortion, create an unrivaled atmosphere.

It’s this song that made me want to go through the effort of tracking down a copy of In A Lonely Place. The reason I say it was an effort is because: there are only 300 of these, and it comes from the UK. It’s roughly $30 dollars for the record, after the conversion, but then there’s the somewhat spendy shipping cost to get it over here.

But man, it is totally worth it.

The packaging and presentation of this record is an experience unto itself. You get a 180-gram vinyl LP, housed in a double gatefold sleeve, along with the album on compact disc in a hand-numbered orange envelope. There’s also a poster, among other pieces of visual ephemera.

I’ve been listening to the compact disc version at my desk at work over and over again all week—but listening to this on vinyl is a real treat. The warbled and imperfect sound coming from the pieces blends seamlessly into the format—the pops and crackles associated with LPs only adds to the listening experience.

Released on Christmas Day (it was a Tuesday after all), I sadly cannot count this in my favorite records of 2013 since it was released in the year prior. And that’s a shame, because this would be within the top five for sure—yes, it is that good, and I am that confident that it would still be that good at the end of 2013.

There is no digital version that I am aware of available stateside, but if you really care about real music, you will spend your Great British Pounds and snag a copy of this before they are all spoken for.

In A Lonely Place is available now from Facture Records and Fluid Audio.