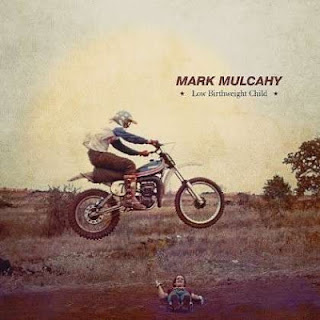 If you are originally from the 80s, and had cable in the 90s, chances are you are familiar with the music of Mark Mulcahy, and you don’t even realize it.

Throughout the 1980s, Mulcahy fronted the always under appreciated college rock outfit Miracle Legion. Critics often described them as an east coast R.E.M, which is a ludicrous statement. They sound nothing alike. After two full lengths and two EPs released via Rough Trade, their big mainstream “break” came in 1992, with their record Drenched, released on a Warner Brothers subsidiary label that had no clue what to do with the band promotion wise, the band found themselves in a legal battle with a label that eventually folded.

Shortly after that debacle, the creators of the much beloved Nickelodeon show “The Adventures of Pete and Pete” approached the band about recording original songs for the show. Miracle Legion lead guitarist Ray Neal declined, as he was completely fed up with the industry they found themselves a part of. Mulcahy, along with the rhythm section Dave McCaffrey and Scott Bouiter agreed, and formed a made-for-TV trio named Polaris.

After Miracle Legion finally dissolved in 1996, Mulcahy began a criminally under appreciated solo career, even though he has been repped over time by Thom Yorke, Jeff Buckley and Oasis. Over the course of the last sixteen years, he’s released only three full-length joints, and a small handful of EPs. 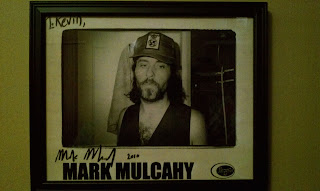 (this is an 8x10 glossy, made out to me, that mark sent me when i bought stuff from his website)

The most recent notice he received by the mainstream, unfortunately, came in the wake of tragic events. His wife Melissa passed away suddenly in 2008, and a tribute album was curated in his name, with the proceeds going to Mark to assist with raising his twin daughters. Along with a long list of bands you have never heard of, the album made the best of its marquee names—Thom Yorke, The National, Frank Black, Dinosaur JR, and Michael Stipe of R.E.M, among others—all covering various songs from the Mulcahy catalog.

For a band that was formed over 20 years ago, Polaris never played a live show. That changed in 2012 when they played together at a “Pete and Pete” reunion show. In December, Mark played a string of shows in the UK, along with a performance at a festival organized by members of The National.

And I suppose maybe it is because he was playing shows “across the pond” that he chose to release his first new music in five years on a small, London based label—a limited edition 7” single.

“Low Birth Weight Child”/”The Cottage We Rented Had A Name” was released in December via Tongue Master Records, and I’m not kidding you about the whole “limited edition” thing. Only 1000 of these things were made. And there’s no digital download, so don’t hop into iTunes looking for this thing—save up your British Pounds and hope that there are some left online.


Side A, “Low Birth Weight Child,” starts out with a rollicking piano riff—and the piano is an instrument that you rarely hear in Mulcahy’s music. It’s a very fast song—it seems like it’s ending just as soon as it is beginning. Musically, it is more expansive in sound, in comparison to Mulcahy’s prior output—2005’s In Pursuit of Your Happiness, and the 2007 EP Love’s The Only Thing That Shuts Me Up. It’s still classic Mark Mulcahy—his voice is one of the most distinct around, but the arrangement pushes well past the typical guitar/bass/drum set up that he used in the Miracle Legion days, as well as throughout most of his solo efforts.

Side B, “The Cottage We Rented Had a Name,” is, dare I say, funky?  It’s a lot slower in tempo, and it wastes no time finding its way into a groove, powered mostly by a classic electric piano sound. It too, musically, is new territory.  I found this song in particular to be somewhat shocking to listen to—just because it is so drastically different.

(this is when mark and i became best bros on twitter)

The last two years have held some kind of promise that Mark Mulcahy was working on a new full-length release. The fact that he has upped his public appearances in the last few months is hopeful that something more than this single will be arriving soon. And if the two songs found on this release are any indication, it should be a step in a different musical direction.  You can purchase said 7" from the Rough Trade online store, you know, if there are some left.

I had attempted to embed a You Tube video within this entry of Mark performing "The Cottage That We Rented..." but Blogger is fucking up all over the place tonight. So here's a hot link for it. Peep Game.