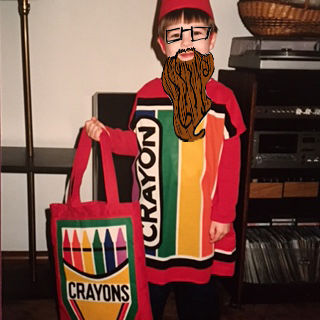 In what has become an unfortunate tradition with my work for the Southern Minnesota Scene magazine, there is an issue with the website that prevents a lot of content from showing up online. One of those things that it prevents, for the third month in a row, is my column.

This was for the October issue, which hit newsstands in September. It's Halloween themed, so it was slated to run online closer to Oct. 31st, which, despite all best efforts, it did not appear as it should have.

But here, in its entirety, complete with photographs, is my column.


As a grown ass man, I don’t get the draw of Halloween.

But then again, I don’t get the draw of a lot of things—like professional sports, Drake, or “The Big Bang Theory.” Maybe I’m just out of touch with my generation.

Maybe I’m out of touch with other generations, too.

As a kid, I got the appeal of Halloween—or at least I think I did. When you're young, you really don’t overthink a chance to dress up as your favorite pop culture reference for a night and go out in search of candy, or in some lucky cases, quarters.

Or, in some unlucky cases, pieces of fruit.1 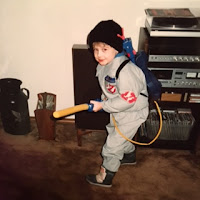 In retrospect, I realize my costume choices became more and more obscure the older I got. I started out with your standard child-focused crowd pleasers of the late 80s and early 90s—there was the year I was a Ghostbuster, followed by the year I was a Ninja Turtle, complete with cumbersome foam shell.

By fifth grade, I opted to go as Gambit, one of the X-Men; you know the one. He was the one who threw explosive playing cards at you and talked with a very deep New Orleans drawl.

By sixth grade, my final year trick-or-treating, I was The Crow—you know, that gritty anti-hero who kind of looked like Robert Smith. Based on a comic book from the 1980s, it was then turned in to a movie in 1994 starring Brandon Lee.2

A vampire or a pirate—people expect that when they open the door on Halloween. But how many senior citizens, or bored suburban housewives are going to be familiar with the X-Men or The Crow? 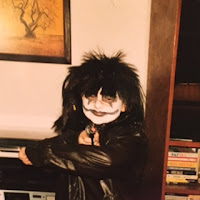 It would appear that I was a really weird kid, and for that, I feel like I owe a lot of people an apology.

Upon entering junior high, there must have been something unspoken but understood about how I was too old to go trick-or-treating. So from the seventh grade on, for many years, Halloween became just another day to me.

The first year that my wife and I moved in together, we tried having a Halloween party—it was ill fated, however, due to poor attendance. In an effort to make the best of it, we did play “Pin The Pin on The Pinhead” and watched very bad “scary” movies late into the night.

Our attempt the next year went over a little better—we also decided to partake in a couple’s costume. My wife went as Brittney Spears; only it was the shaved head, umbrella waving Brittney Spears of 2007.

I went has Kevin Federline.

We threw one more Halloween party in 2008—going the couple’s costume route again, my wife went as David Bowie and I went as Mick Jagger (with a beard, of course) and we were supposed to be the “Dancin’ in The Streets” music video. There was a big reveal where we stumbled around our living room as the video played behind us.

I say stumble around because by this point in the night, as a large crowd of our costumed friends had gathered, I had mixed myself one too many very strong gin and tonics and was full of the Halloween spirit.

Also, this was the party where we sprung for a ghost piñata, which a friend of ours completely eviscerated with one swoop, spreading fun size candy all over our backyard—we were still finding it and picking it up weeks later.

The following year, we were in the process of moving so we were unable to host a party. Instead we watched “scary” movies including Twin Peaks: Fire Walk With Me, and Quarantine. We also tried to accommodate trick-or-treaters, but at the point when un-costumed high schoolers show up with pillow cases, we knew it was time to turn the light off and close the curtains.

My wife really used to like Halloween, so the next year, even though she had commitments playing in two orchestra concerts the weekend of, she decided to dress up as Stevie Nicks and coerced me into going with her to a very sparsely attended event featuring a 70s and 80s cover band.

I went as “Guy who had a sinus infection, and would have rather been at home.”

After we adopted rabbits, the attempts at celebrating Halloween, at least in our own home, pretty much ceased. We know to pull the shade down and act like we aren’t home in an effort to prevent gaggles of children from ringing our doorbell. 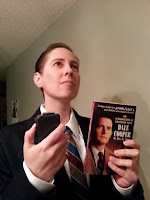 The last time we participated in Halloween was three years ago when my wife was invited to a party thrown by an acquaintance. It was the year she finally got to dress up as Special Agent Dale Cooper3; I was more practical with my costume and went as “vegan baker.”4

Some people never grow out of Halloween; as adults, they still celebrate—decorating their homes and donning elaborate costumes. For others, growing out of it is, in a sense, a form of compromise with your partner. I never intended to, like, take the fun out of it for my wife, but with the older you grow, your priorities change. It was never something important for me, and so you, at some point, resign yourself to move on to something else.

It was important for her because she went to Halloween lock-ins and other community or school events where she got extra mileage out of her costume.

I never went to lock-ins; and I never liked scary movies. And save for my final year trick-or-treating, I don’t think I ever went with a friend, or planned a costume with someone else. It was always me, forever an only child, trudging through our darkened neighborhood, begrudgingly wearing my winter coat under my costume, accompanied by a parent—usually my father—standing at the edge of the driveway of each house I visited, waiting for his precocious, weird child to finish before moving on to the next one.

1- Fruit handed out on Halloween struck fear into the heart of any parent in the 1980s and 90s because of the instances of razor blades and pins being stuck in apples. I believe the year I did end up with an apple in my trick-or-treat bag, it was promptly thrown into the trash for my safety.

2- You know, the movie where he died on set because a prop gun was loaded with real bullets and no one could quite explain how or why this occurred.

3- I took a photo of my wife as Special Agent Dale Cooper and tweeted it to Kyle Machlaclan and in return he “favorited” it, which was possibly one of the more exciting exchanges I’ve had with celebrities on the internet.

4- “Vegan baker” was a real drawing in an issue of Vegetarian Times that both my wife and I thought looked exactly like me and for a while I considered suing for likeness royalties.