Album Review: Rituals of Mine - Devoted 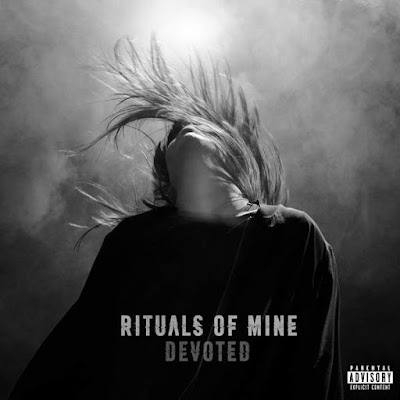 Slightly over a year ago, I reviewed Devoted, the sophomore full-length by the electronic-based duo, Sister Crayon. Co-produced by Omar Rodriguez-Lopez of At The Drive-in and Mars Volta fame, it was also released digitally via his own vanity imprint, and given a very small vinyl pressing in the spring of this year.

I named Devoted one of my top three records of 2015—it handles the confusing blur between love and lust and the emotional toll it takes. In doing so, Sister Crayon created an emotionally charged, cathartic listen. It also fulfilled the potential I heard in the band on their 2011 debut, as well as the Cynic EP from 2013.

The duo—Terra Lopez and Dani Fernandez—recently inked a deal with Warner Brothers Records, and in doing so, changed the name of their outfit to Rituals of Mine, which is an expression pulled from one of the songs on Devoted. And in signing with Warner, rather than heading back into the studio to work on an album of new material, their first release as “Rituals of Mine” is a reissue of Devoted—featuring additional production and remixing by Tom Coyne.

In either an interview about the changes, or in the statement the group made on Facebook, it was indicated that the group was unhappy with Rodriguez-Lopez’s lack of interest in promoting the album; he quickly became busy with the At The Drive-in reunion shortly after it came out, and Fernandze and Lopez said they opted to change the name because they no longer identified with being called “Sister Crayon,” citing recent personal tragedies, as one of the main catalysts for the change.

Earlier this year, after Kanye West released The Life of Pablo, and I was not very kind to it in my review, a friend of mine who is a die-hard Kanye fan, asked me to reconsider my stance on the record, and that I should review it a second time and compare the original mixes to the new ones West released around a month or so later.

Part of me was interested, but only part of me; at the time I was too bogged down with work at my old job writing for the newspaper (and the depression that came with it) to even consider an endeavor like that. But, to get a real sense of the differences between both versions of Devoted, you kind of have to do that—listen to each song two times, and then compare.

In passing, however, simply by being rather familiar with the Sister Crayon version, the new mixes of Devoted do not sound all that different—things sit in different places with the mix, and overall, there’s a lot more noticeable reverb in Lopez’s vocals, and everything just seems a little louder.

Sitting on the floor of my living room while my rabbit eats her hay, I have ear buds crammed into my ears with an alternating playlist, jumping back and forth between the Sister Crayon versions and the Rituals of Mine update. Between the first two tracks, there were very few noticeable differences—but on the third track, and first single for Rituals of Mine, “Ride or Die,” you can see some of the labor that went into revitalizing the album. The bass rumbles a lot harder, the synths seem a lot smoother, and the production on Lopez’s vocals have a lighter quality to them thanks to the additional production. It was always a smooth, slow burning jam, but now it is even smoother.

Later on in the album, the additional tinkering provides an extra build up during the opening to the skittering “Providence.”

Whether it is released under the moniker Sister Crayon or Rituals of Mine, Devoted’s crowning achievements arrive as its closing tracks—the devastating, somber “To Show You Violence,” and the visceral, seething “Hell in My Head.”

I didn’t touch on this with my original review of Devoted, but the album itself works in a bit of a cyclical fashion—“I’m tired of thinking about you,” Lopez breathlessly chants on the album’s pulsating opening track, “Armor.” Then, later, she uses the same line within a different context on “To Show You Violence.” It’s a neat, and surprising device that works very well and only provides additional depth to the conceits found within the album—on “Armor,” it’s used to express the obsession that comes from a new relationship: “Babygirl told me to own that shit,” Lopez sings in the electrically charged opening line.

Juxtaposed with that, on “To Show You Violence,” the same lyric is incorporated to express the regret that comes when that love is over, but it hasn’t left your heart (or thoughts) just yet.

While the reissue, or re-release, or whatever we’re calling this edition of Devoted, didn’t alter that much of the original album, it does provide new listeners a chance to be introduced to the band at this stage in the game; and for longtime fans, it provides the opportunity to revisit the record, and hear just how urgent it still sounds—frenetic, pensive, reflective, and raw—the band’s name may have changed, but the soul they pour into their music remains the same.