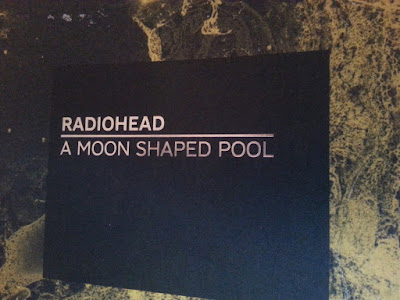 There were a few times throughout the summer that I forgot I had given Radiohead $86 of my money and that eventually I’d be receiving the deluxe edition of their most recent album, A Moon Shaped Pool.

Without batting an eyelash, I bought the set in May when the album was released—similar to the special editions of In Rainbows and The King of Limbs, it features the album on vinyl and on compact disc, along with a second CD of additional material, all housed in a commemorative package.

Information on when the set would ship was purposefully ambiguous, slated to go out “in September.” When September was coming to an end, the editions finally shipped out, and mine arrived (unscathed, thankfully) on Tuesday afternoon.

To say Radiohead have out done themselves with this edition would be an understatement; it’s that impressive, and it is worth way more than what I paid for it.

I’m still getting used to the notion of listening to music off of my laptop. Last year I bought a shitty Bluetooth audio receiver so I could easily play music while still using the computer for something else (usually writing reviews.) A Moon Shaped Pool was released digitally in May, with standard editions arriving in late June. I was afraid that I wouldn’t listen to the album a lot if it just sat in my iTunes library for five or six months, so in an effort to spend more time with it during the summer months, I bought a $10 copy of it on CD at Target on the day it was released, which I think was a wise investment, because yes, I did listen to it a lot. 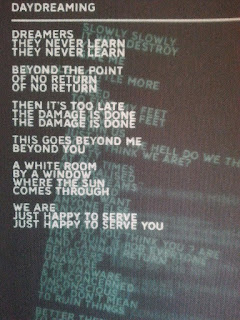 The roll out of the special edition of A Moon Shaped Pool is, more or less, the smoothest since Radiohead began self-releasing deluxe packages like this. The release of In Rainbows was problematic—you could pay the band what you wanted to for mp3s, or spend $80 for what, at the time, they called a ‘discbox’ of the album, which shipped around two months later. In the interim, the band inked a distribution deal with XL Records for the standard release of the album—which hit stores while many people (me included) were still waiting for their discbox.

The release behind the much-maligned King of Limbs went a little better, though the packaging itself was a little less impressive. 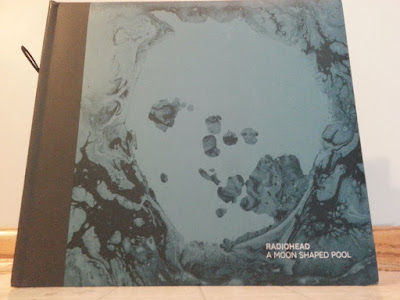 A Moon Shaped Pool comes in a giant bound case—reminiscent of a hardback book, or as the band indicates, 78 rpm ‘shellac records.’ The silver and grey toned cover art is now presented in a blue hue, with the title of the record embossed in silver on both the front cover, as well as the spine of the collection. Inside is a 32-page booklet containing lyrics along with additional and striking artwork from Radiohead’s go-to visuals man, Stanley Donwood.

The set is then banded closed by a piece of recording tape in a plastic sleeve, connected by a sticker that says ‘Do Not Discard.’ The tape is actual ½ inch master tape from previous Radiohead recording sessions, dating back as far as Kid A.

The standard edition of the album was released on white vinyl, and as anticipation grew for the deluxe set to begin shipping, I saw chatter on an internet forum that many people were not happy with the sound quality of the white edition—citing a lot of popping.

That, thankfully, is not the case with the black vinyl included in the special edition. As anticipated, it sounds great, and brings new life and depth to these eleven songs.

While the band was generous with non-album material in 2007 with the special edition of In Rainbows, with A Moon Shaped Pool, we are treated to only two additional tracks featured on a supplemental CD. One of which, as I had anticipated, was “Spectre,” the band’s rejected attempt at a theme to the latest James Bond film, which had was released for gratis digitally on Christmas Day.

The other non-album track included is “Ill Wind,” which begins with jazzy drumming, and dueling low end and guitar riffing panned to either channel. The feeling, at least in the early portion of the song, is reminiscent of other Radiohead songs, but as the song progresses, the band lets a cacophony of beeps and boops take over, as distorted synth lines and eerie, atmospheric guitar waves cascade in over Yorke’s ethereal vocals.

The chatter online was ‘I can see what this was left off the album;’ however, that isn’t to say it’s a bad song. Believe me, they’ve made worse b-sides throughout their career. It’s definitely cut from the same cloth as the rest of A Moon Shaped Pool as far as bridging the distances between the band’s older, more traditional instrumentation, along with their interest in vintage synthesizers. It’s a relatively short, and fast song—clipping along within four minutes. It’s not a weak song per se, but removed from the context of the album as a whole, I am uncertain of where, if at all, it would have fit in. 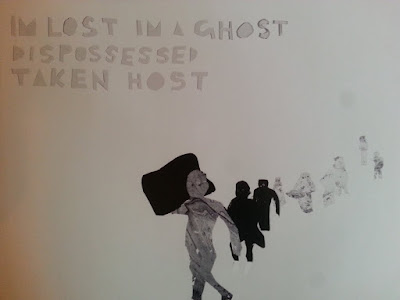 For the fairweather Radiohead fan, or passing fan, spending nearly $90 on an album may be unfathomable. But for the diehard fan (like myself) it’s an investment in something you love that continues to pay dividends every time the needle hits the vinyl and every time you turn the page in the liner notes.

A Moon Shaped Pool may not be the band’s best album, but it is still their most progressive in 16 years. It’s not an immediate listen—it unfolds very deliberately and slowly, but the sense of urgency in the songs is there, buried deep underneath all the densities. The special edition serves as a reminder of that fact.