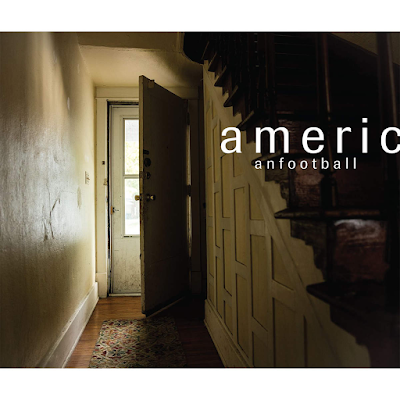 I hit play for the first time on American Football’s second album, aptly titled American Football, or LP2 (for ease) on what could be described as a nearly perfect autumn afternoon—the leaves are still turning, the air was crisp and breezy, and the sun was out. Bottling a sense of nostalgia and longing that many would associate with fall, American Football is a damn near perfect soundtrack for this time of year.

I missed the boat completely on American Football during their initial run in 1999 and 2000, when they released their first album, also titled American Football. But I would have been a prime candidate for listening had I been aware of it. It was around this time that I started listening to similarly minded bands like The Promise Ring and The Get Up Kids; “emo” music, yes, but because I grew up in rural Illinois, I didn’t actually know the word or what it meant until I got to college.

Long considered a classic of the genre, American Football (the first album) has gained a cult following over the last 17 years. The band dissolved less than a year after its release and all went on to form other projects before American Football was resurrected in 2014 following a deluxe reissue of their debut album.

According to the Wikipedia entry w/r/t the first album, it was recorded in a matter of days—rough and ramshackle, it combines elements of the mid-90s emo movement, math rock, and even some post-rock with the dueling electric guitar interplay and the soft, half-sung/half-spoken delivery of Mike Kinsella’s vocals. Even listening to it now (for the first time) I can hear the urgency with which it was committed to tape, though approaching it just from purely a historical approach for the sake of this review, it’s not something I could ever hold as dearly as someone who discovered it upon release and carried it with them all of these years.

LP2, however, is something different entirely.

Rarely am I so captivated by an album from the moment it begins as I was with the second American Football. The opening track, “Where Are We Now?,” begins like a dream, slowly fading in with that aforementioned twin guitar work creating cascading waves before Kinsella’s voice—full of strength and clarity—asks the very pointed question: “Where are we now? Both home alone in the same house.”

Then, within 80 seconds of the song beginning, it becomes a dramatic and sweeping thing, taking down everything in its path with its earnest, heart on sleeve lyrics—“I don’t remember a lock on the door; is it keeping me out, or you in?”

This isn’t the kind of “emo” that rose to prominence in the latter half of the 2000s—this isn’t the music of skinny jeans, extra-small t-shirts, and bangs that hang down covering one eye. American Football were never that, and they certainly aren’t that sort of thing now. The members of the group, all pushing 40, are making “emotional” rock music for adults, and it doesn’t need to hide its meaning behind ambiguity or metaphors.

A bulk of LP2 could be seen as a “divorce” record, or at the very least, a record that discusses the real relationship issues you face as adults—“The ghost in the corner of the room knows what you sleep in, when you’re dreaming and of who,” Kinsella sings on the album’s acoustic-tinged third track, “Home is Where The Haunt Is.”

Later, on “I Need a Drink (or Two or Three),” he confesses “How I wish that I were me; The man that you first met and married.”

Structurally, LP2 begins very strong, and reaches a bit of a peak after the halfway mark. Content wise, it’s far from being a “perfect” album. It, much like the characters painted within these songs, has its flaws. The shout-a-long “Desire Gets in The Way” arrives near the end, and feels a little out of place given the feeling and pacing the rest of the record has, especially when the album concludes after that with the swaying, pensive, and bittersweet “Everyone is Dressed Up,” that ends somewhat abruptly, providing little resolve.

Out of all of the songs that I have listened to in 2016, this is within the top three of ones that have hit too close to home.

I recently quit my job writing for the paper—the job that I held for around two years, and when most people ask me why I left and moved onto something else with exponentially less stress and responsibility, I will say it was because I realized I “no longer had the disposition to do the job.”

While that is true, it’s also describing what happened in a very polite way. Because the reality was I found I had fallen into a dark pit of crippling depression and with each day that I continued to sit in my cubicle, writing news stories about things I wasn’t interested in or didn’t care about, I was uncertain I’d ever find my way out.

So when Mike Kinsella sings “I feel so sick. Doctor, it hurts when I exist. This isn’t the pain I am usually in—I hope it’s not contagious,” I understand. I understand completely, because it’s like he has described the last ten months of my life in a few lines in a song.

I say that American Football is not a perfect record, but that doesn’t stop it from being an amazing, emotionally charged record. It’s methodical and calculated in its execution—no longer ramshackle, the band sounds tight working together as a unit, and the production values are big and bold; however, the message is still just as urgent as it was 17 years ago. It’s a meditation on the pitfalls of adulthood and how, despite our best efforts, there is still no cure for the human condition.
American Football is out on Oct. 21, via Polyvinyl.
Labels: album review american football depression emo mike kinsella music for fall new album new music nostalgia personal essays poorly written thinkpiece review