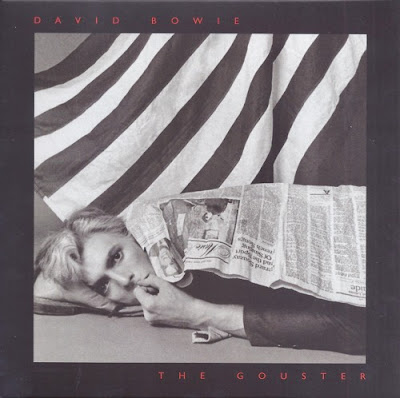 From David Bowie’s initial, and mostly unstoppable run during the 1970s, leading up to 1980’s Scary Monsters, 1975’s Young Americans has never been really one of my favorite albums—or, at least, not one that I return to very often.

Perhaps it has to do with the fact that I would consider the title track, like many of Bowie’s most successful or well known singles, to be a little played out, and that there are myriad songs that are much, much better if you look just a little deeper; perhaps it has to do with the production values—based on the mixing and mastering of the 1991 compact disc reissue in my collection, there isn’t a ton of depth, leaving it best described as a somewhat flat sounding experience.

Or, perhaps it has to do with the record’s pacing—a slim eight songs (not counting bonus tracks or whatever), for something that was trying to hard to find a specific, soulful sound, it can be a little slow moving at times—specifically in the first half before we start getting into the collaborations with John Lennon.

Along with the other releases of this era in Bowie’s canon, Young Americans was recently reissued in the second installment of a comprehensive anthology. Titled Who Can I Be Now?, it covers only two years in his mid-1970s career.

Outside of the three studio albums included, the collection features two live albums, as well as an odds and ends assortment of single edits. The main selling point of Who Can I Be Now?, however, is Bowie’s “lost” album—The Gouster.

Recorded in 1974, the album was subsequently scrapped and then reshaped to become Young Americans. Four of Gouster’s tracks made the cut to Young Americans, with the additional three being both heavily bootlegged over time, along with being tacked onto the 1991 reissue of Young Americans.

Presented in the context of the anthology, this is the first time Gouster is being officially released as it was intended to be heard, overseen by longtime collaborator and the album’s original producer, Tony Visconti. It seems worth noting that an article New Musical Express states that some fans feel Gouster should actually be ten songs, and that there are still three (also heavily bootlegged tracks) that are missing.

Described by Visconti as an attempt at “40 minutes of glorious funk,” the collection opens up with the seven-minute, disco tinged “John I’m Only Dancing (Again,)” a reinterpretation of the early career single of a similar name. And from there, the album continues on in a rather self-indulgent fashion w/r/t the running times of the songs—Young Americans, also, had a similar problem.

In a sense, Gouster also suffers slightly from a pacing issue. As long and tedious as “John I’m Only Dancing (Again)” can be, it kicks things off with a high dose of energy. Following that up, however, is a tough act to follow. While the next four songs—“Somebody Up There Likes Me,” “It’s Gonna Be Me,” “Who Can I Be Now?,” and “Can You Hear Me?”—are all very soulful (which was the point of this album, to an extent) and well constructed, they are all also rather lengthy and slow moving.

Picking the momentum back up is “Young Americans,” which is buried deep within the album’s track list, arriving second to last before a much cleaned-up and alternate mix of the slinky “Right” closes things out.

I would say that, up until that point in time in his career, Gouster could be viewed at his attempt at making a “personal” record. This material, as well as what would wind up becoming Young Americans is exponentially less theatrical than what he had been building toward, culminating with Diamond Dogs, and if finds Bowie in a somewhat reserved place. Perhaps it was the sudden interest in soul music that turned Bowie inward, allowing these somewhat reflective songs to take shape.

I say this based on the song titles alone—there are two that ask questions, three of them involve the pronoun “me”; the other “I.” In a recent interview with Mojo, Visconti said the song “It’s Gonna Be Me” was too personal for Bowie at the time, which is why he opted to leave it off the record entirely.

After obtaining a copy of The Glouster shortly after its release within the boxed set, I sent off a Tweet saying I was listening to Bowie’s “lost” album. An internet friend of mine—fellow music writer and contributor to Bearded Gentlemen Music, Mark D. Milner—fired back with that he felt it “should have stayed” lost, later adding that it isn’t better than or add anything too Young Americans.

In a way, he’s right. Given that the material of this album was pretty much readily available, we’re not really treading new ground here—and this presentation of The Gouster is just part of the ephemeral nature of the concept around boxed sets and reissues. Yes, sure, it’s been remixed and remastered but in the end, what does that change?

I was explaining this album to my wife the other evening, and she asked if I had planned on buying Who Can I Be Now? I told her I wasn’t, mostly because of the cost. Even on CD, it’s over $100, but the vinyl edition is pushing $250. Also, we already own a majority of it—outside of the standard albums included in this collection, I am the owner of the massive (and now out of print) Station to Station reissue from 2010.

The Gouster was just an artifact that I was interested in hearing. And for the Bowie completest, or at least the level of fan I am (not sure what you’d call that, however), it is worth listening to, and if anything, it’s given me slightly more insight and revealed a little more depth to an album in the canon that I had previously slept on.

The Gouster is available now as part of the Who Can I Be Now? boxed set, available on compact disc and vinyl, from Parlophone.  It is also available digitally, and the album can be purchased track by track, in iTunes.
Labels: 1970s album review boxed set david bowie lost album nostalgia reissue reissues review the gouster young americans