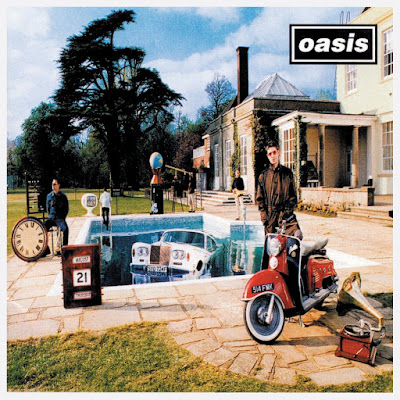 Maligned and bloated, Oasis’ third album, Be Here Now, is looked back on as the moment the Britpop bubble burst. At the time, in 1997, the band considered themselves to be the “biggest” in the world. Sessions for the record were fueled by enormous egos, Scarface levels of drugs, and volatile in-fighting between the Gallagher brothers; and in the end, Be Here Now arrived behind a massive amount of hype, only to fall upon deaf ears stateside, and dwindling sales in the United Kingdom.

After going through a revolving door of additional band members for subsequent albums and tours, Oasis split up in 2009, and beginning in 2014, the band’s principal songwriter and guitarist Noel Gallagher launched the “Chasing The Sun” reissue campaign—the band’s auspicious debut, Definitely Maybe, and its ridiculously successful follow up, (What’s The Story) Morning Glory? have both seen the reissue treatment, and on the eve of its 20th anniversary, Be Here Now is being revisited, and revised, with two discs of supplemental material including b-sides, live recordings, and the recently unearthed “Mustique Demos,” recorded with Noel on lead vocals during a 1996 stay in Mick Jagger’s private island villa.

When I was listening to Be Here Now, I was explaining a bit of the album’s failure to my wife. About midway through, she posed the question, “Why do people not like this album? It sounds like an Oasis album.”

She’s right of course. As a band, Oasis really latched onto a sound—specifically on those first three albums—and they never let go of it. Maybe that was the problem. Though some surmise that the success of (What’s The Story) Morning Glory and the subsequent tours and performances in support of it could never be matched, no matter how hard the band tried.

Overall, Be Here Now is a loud album—perhaps it has to do with Noel Gallagher’s production. He wanted to make the album sound “dense and colossal,” so to achieve that, he layered multiple guitar tracks on songs, as well as dubbing channels with the same guitar parts in order to achieve the volume he wanted.

Right out of the gate, he finds success with this formula. The album’s first single and opening track, “D’You Know What I Mean?,” is a prime example of the bombast and excess that turned off so many people from Be Here Now. It’s obnoxiously layered—countless guitar tracks searing through both left and right channels, heavily effected drum beats, that during the song’s pre-chorus, get completely lost in the mix, and somehow, Gallagher manages to cram a string section in there as well.

And this is just the first song. Granted, it’s over seven minutes in length. But there are still eleven more to go.

Made for the “CD era,” Be Here Now is 71 minutes and change, with nearly every song teetering into “self-indulgent” territory. But as grandiose as it all ends up being, and as cacophonic as mix can wind up being at times, my experience with this has not been a bad one. It’s not a bad album; it’s just a product of its era and environment. Within the two years that passed between (What’s The Story) and Be Here Now, the band—particularly the Gallagher brothers and Oasis’ in-house producer at the time, Owen Morris—completely lost control and focus.

Oasis were always a guitar-driven band, but on Be Here Now, there’s just a fuck-ton more of them, and they are exponentially louder than they were in the past. Even on their ramshackle and charming debut, you can hear the desire for something bigger, and louder; it just took them a few years and a lot of drugs to make it there.

I’d say Be Here Now is more of a “deep cuts” Oasis album. It has two singles that people probably know, but the rest of it is lengthy Britpop pomp—and within that, you’ll find some pretty decent or at least palatable songs, including the muddy psychedelics of “Magic Pie,” or the sweeping grandeur of one of the album’s many “anthems,” “Stand By Me.”

Outside of “D’You Know What I Mean?,” casual Oasis fans may remember this album for the slow motion ballad “Don’t Go Away,” which doesn’t quite recapture the magic of “Wonderwall,” and despite how insipid and saccharine the lyrics are, it’s a pretty impressive example of Gallagher’s pop songwriting abilities.

No reissue is complete without the obligatory additional material, and Be Here Now doesn’t skimp: included on the collection’s second disc are six b-sides, three demos, four live tracks, and a slightly shorter version of “D’You Know What I Mean?” that Noel Gallagher remixed this year. He had, apparently, intended to remix the whole album in an effort to tinker with the levels and make the songs shorter, but I guess that was maybe too difficult, so he quit after the first one. Dubbed the “2016 Rethink,” it shortens the song by 20 seconds, and doesn’t so much strip away much of the pomp and bombast of the original, but it parses it out differently so that the mix is more even and not as abrasive.

The b-sides—well, most of them are shorter than what made the final cut of Be Here Now, so maybe that’s why they didn’t make it onto the album. A number of them feature Noel on lead vocals, giving them a different feeling when compared to the songs that Liam is involved in. Some of them are also just bad and you can kind of tell the band was really phoning it in hard—“My Sister Lover,” aside from having a cringe-worthy title, is probably the worst offender of the bunch.

The collection’s third and final disc belongs to the aforementioned “Mustique Demos,” a full album’s worth of early recordings with Noel on lead vocals, laid down in a villa on a private island.  A mix of songs that both made the final cut as well as ones that did not, it shows the band operating in a slightly more relaxed environment with a lot less on the line, creating music with a raw sense of urgency.

If you grew up in the 1990s and had cable television, the squabbling of the Gallagher brothers always seemed on the verge of eclipsing the band’s music. Even to this day, seven years after calling it quits, Liam and Noel still insult one another in the press.

I stop short of calling Oasis an “important” band. Yes, “Wonderwall” is an iconic song and it represents an important part of the Britpop movement and popular music in the 1990s—but what else can we attribute to Oasis? What else have they contributed? Have the changed lives?

Be Here Now is far from a footnote on the band’s career, but in the background, buried in the mix, you may as well hear a death knell.  It’s a difficult album, but it’s a listenable album; just be patient with it. Sure, everything kind of sounds the same, but wasn’t that Oasis’ charm? They did release a live album called Familiar To Millions after all. For the die hard Oasis fan (is that a thing?) they will certainly enjoy the supplemental material hat is included in this set.

For the casual fan, or the person who was unfamiliar with Be Here Now upon its release, all of this is worth a listen, and it serves as an interesting entry point to the band’s tumultuous history.