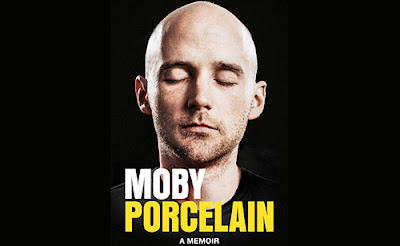 The thought behind writing your memoir is that you think your own life has been interesting enough that it warrants writing it down and that other people will want to read it.

Such is the case with Porcelain, the recently published memoir by Richard Melville Hall, the musician most commonly known as Moby.

A lengthy 400+ pages (plus two sections of photos), Porcelain is not a traditional memoir in the sense that it recounts Moby’s life from birth up until he started writing it; rather, it chronicles the years 1989 through 1999 and covers Moby’s humble beginnings, his subsequent rise, and his fall in the wake of the critical and commercial failure of his misunderstood 1996 album Animal Rights. The book ends shortly before the release of Play, as if to tell the readers, “Well, you know what happens next.”

You learn a lot about Moby from reading Porcelain—specifically that at the tail end of the 1980s, he was basically homeless. He was paying $50 a month to corrupt security guards so he could live in an abandoned factory in a dangerous neighborhood when he was still in Connecticut, prior to his relocation to New York City.

You also learn that Moby was a bit of a pussy hound during the decade this book covers: after moving on from the very religious girl he dated early on, he becomes involved with a raver girl and a vegan punk before he throws himself into dating (or at least just sleeping with) former sex workers and strippers, among others. I mean for a while, it’s like almost every other chapter has some mention of a woman that he is current plowing or has plowed at one point.

He also spent the last four years of the decade either drunk, or hung over. After touting his sobriety through the early 1990s, yet being immersed in rave culture at that time, Moby doesn’t pick up the bottle again until 1995 after a messy break up with a girl named Sarah. Once he picks it up, he doesn’t put it back down again.

Outside of his battles with alcoholism, a bulk of the conflict in Porcelain comes from within—a self-described “Christian,” Moby spend a majority of the book struggling with maintaining his Christian ideals while doing things like having sex in middle of a dance floor, surrounded by drag queens dressed as Stevie Nicks.

The book is written out in a series of short anecdotes, or vignettes, that cover specific moments or events, but in doing so, some things fall through the cracks.

One thing that stuck out for me was Moby’s attempt to leave his original, very independent label, and sign with Mute in the UK and Elektra in the US. One minute he’s a close friend with Instinct Records label head Jared—cleaning his apartment, taking care of mailing things for the label; next thing you know, he wants out, but his interested labels have to buy him out of his Impact deal. What happened? What went south? Why was this information conveniently glossed over, but instead, Moby can remember what he purchased on a trip to the grocery store and chooses to include that on more than one occasion?

I stop short of saying that the book is “well written,” but it is certainly a thoughtful reflection on a period of time. It’s not unreadable by any means, and I commend Moby for actually taking this on himself—the afterward discusses his interest in telling these stories to someone else and having them write the book, but as an alleged descendant of Herman Melville, he was encouraged to at least try to write the memoir himself.

It’s written out in a very casual tone—he tries his hardest and succeeds in most cases to be an affable narrator of his own life. He’s charming while detailing debauchery and self-deprecating in all the right places. But one thing that struck me when reading this—I don’t read a lot of memoirs or autobiographies, so I don’t think this kind of thought really hit me until now—but while reading Porcelain, I realized just how much of a memoir is “creative non-fiction.”

I guess in telling your own story, you reconstruct the moment as best you can. 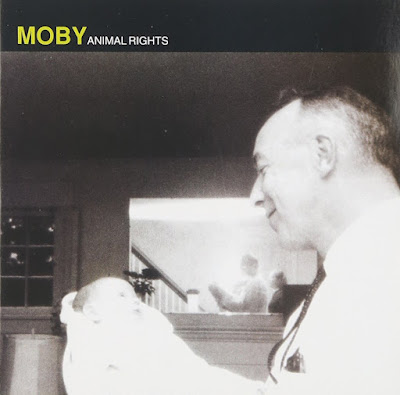 The third act of the book details the failure of the album Animal Rights. Following his rise through the DJ and rave scene in New York, his major label debut was more inline with the work he had been known for throughout the early 1990s. But as the decade progressed, he notes that rave culture took a turn—the drugs people were taking were harder, and the music got darker.

Moby himself has a punk rock background, which is touched on briefly in Porcelain, so to follow up Everything is Wrong, he decides he’s going to make a lo-fi punk album, much to the chagrin of everyone: his friends, his record label, and as he would soon find out, his listening audience, who just didn’t understand how he could go from rave anthems to screaming and guitars in just a year’s time.

I bought a copy of Animal Rights in the winter of 1997 from the K-Mart in my hometown of Freeport, Illinois. I bought it based on the strength of having seen the video for his Mission of Burma cover “That’s When I Reach For My Revolver,” and I also had purchased Everything is Wrong on cassette in 1995, shortly after its release.

To say I was not ready for Animal Rights, at age 13, is an understatement. And even 20 years later, I’m still not 100% sure it’s an album I am ready for—but it’s an album I’ve grown to understand and appreciate more and more over time.

Claustrophobic and cacophonic, dark and desperate, Animal Rights blisters from start to finish and rarely does it let up. Fuzzy, scuzzed out guitars, distorted and shouted vocals, and frenetic drum machine programming anchor down a bulk of the album’s 16 visceral tracks—only after it crosses well beyond the halfway point does it ever sound like something a guy who was headlining European raves would produce.

And even then, it’s so far removed from the dance anthems of Everything is Wrong—the ten-minute “Alone” builds a restrained dance beat behind a heavy-duty synth wall; while “Old” is an introspective piano piece and “A Love Song For My Mom” haunts in its simplicity.

It closes with the evocative “A Season in Hell,” which, in a way, is the inverse of the majesty of Everything is Wrong’s “God Moving Over The Face of The Waters.”

The focus of the album, despite these brief reprieves toward the end, is anger. The record was made following Moby witnessing the lack of energy other electronic performers had while playing the festival circuit, while being simultaneously moved by the raw energy he witnessed from loud rock bands.

In Porcelain, when his management team questions his decision to make a “rock” album, his only response was, “It just feels right to me.”

I was well into my 20s before Animal Rights clicked for me. I had always held on to my copy of it—never thinking to trade it in to a used CD store for cash—but I rarely listened to it. As a young teenager, the angst of the album’s first half made me nervous, but something about its structure, its sharp focus yet unfocused execution all of a sudden made more sense to me as a listener.

It’s not a fun record; it’s not the kind of thing you throw on when you are having dinner guests. 20 years later, it’s still a demanding, complicated listen. It asks questions but provides no answers, and in the end, there is really little resolve. But it’s still impressive, and two decades later, considering how weird it sounded in the 90s, it still sounds weird today—and not in a bad way. And despite it being a near killer at the time, it is a pivotal moment in Moby’s career.

Considering I’ve been listening to the guy for over 20 years, I would say that I more than a fairweather Moby fan. Porcelain, as a book, is for a very specific audience—fans of Moby. Maybe they are hard-core fans; maybe they just really loved Play when it came out and haven’t thought about him since then. It’s the kind of book that’s not out to change the course of literature or impact lives in some kind of transcendental way. It’s a memoir written by a musician and despite its slightly cloying nature at times and for all its flaws, it kept me interested, and I can’t say the same for all memoirs written by musicians.

And if you have not listened to Animal Rights at this point in your life, please heed the advice written in the album’s liner notes: “Please listen to Animal Rights in its entirety at least once.”

Animal Rights is available for an odd price of $11.55 directly from Moby's online store; Porcelain is out now via Penguin.