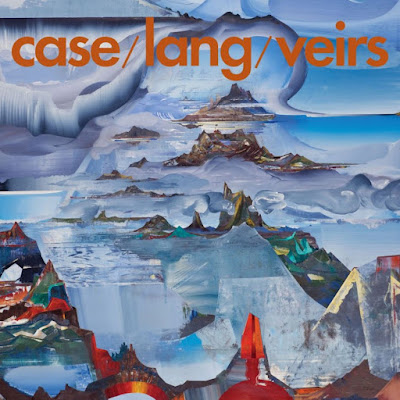 Neko Case is one of the musicians that I follow on Twitter, and for the last few months, she’s been heavily on the promotional trail for her collaborative album with k.d. lang and Laura Veirs.

And despite how much I enjoyed Case’s last solo effort from 2013, for some reason, I didn’t find myself exceptionally interested in listening to the trio’s aptly titled debut, case/lang/veirs—however following its release, and following sampling of, like, 20 seconds of “Atomic Weight,” in the iTunes store, I realized I had made a huge mistake in not investing in this sooner.

Formed seemingly on a whim with an email sent from lang to the others, the group itself grew organically into what was finally committed to tape—Veirs and lang handling a bulk of the heavy lifting on the songwriting duties, and all three working together on incredibly haunting and impressive harmony vocals as well as providing each member a time to shine by taking the lead throughout the course of the album’s 14 tracks.

case/lang/veirs smolders from the get go—the aforementioned “Atomic Weight” slowly burns, and right out of the gate, showcases the impressive vocal arrangements of the trio on its opening sequence: “I’m not the freckled maid; I’m not the fair-haired girl; I’m not a pail of milk for you to spoil,” they sing, each voice layering itself upon the other radiantly; equally as slow burning and smoldering is its follow up track, “Honey and Smoke,” on which lang takes the lead, as the song sways hazily and beautifully in a 60s-esq girl-group aesthetic.

Elsewhere, as the album hits its second half, it sparkles and shimmers brightly with the sun-soaked sounding “Best Kept Secret,” it shuffles and skitters strongly on “Down,” and it gets down soulfully with the lang-led “Why Do We Fight?”

As the album unfolds, it allows the trio to explore a variety of evocative musical atmospheres, and what’s most impressive about case/lang/veirs is that even with three names “headlining” the effort, as it were, it’s never pulled three different directions; by working together and combining strengths, the album has a remarkably cohesive feeling.

The grouping of k.d. lang, Neko  Case, and Laura Veirs is an interesting one to say the least. One is, for certain, a household name—k.d. lang received widespread acclaim in the early 90s with her radio-ready hit “Constant Craving”; Case has a long running solo career with a cult following, and clocks time as a member of the Canadian “super group” The New Pornographers; then there’s Veirs, the youngest of the three and probably the least widely known, who is a bit of an idiosyncratic folk singer-songwriter that I was first made aware of around seven years ago with her contributions to a Mark Mulcahy tribute album.

The pairing of the three, and an album like this is a dream for the NPR-set—but it’s able to transcend its middle class, middle age, Caucasian audience. It’s a strong set of songs; structured to ebb and flow in such a way that it never loses its momentum. It also is a relatively short album—only one the songs is over four minutes in length, so even if this wasn’t an idea that worked out, it never overstays its welcome.

Thankfully for you and me, this was an idea that worked out—case/lang/veirs is a thought provoking and accessible listen that showcases the talents of three very diverse performers in contemporary popular music.

case/lang/veirs is out now via Anti-.