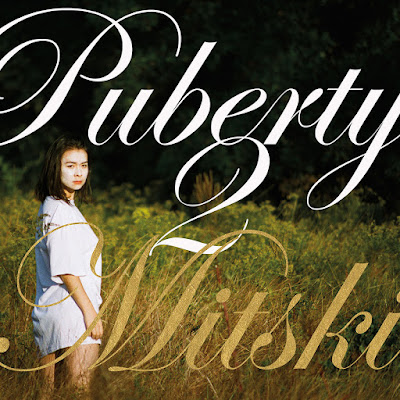 From the moment Puberty 2 starts, I found there to be something both hauntingly and comfortingly sincere about Mitski Miyawaki’s voice. Throughout the album, she straddles the juxtaposition of both the fragile and wounded with the strong and confident. It’s an interesting balancing act, and it’s one she pulls off nearly effortlessly.

First, let’s start with that title—Puberty 2. What the fuck does that mean? I have no idea, but Miyawaki has a history of eyebrow raising album titles, including one called Retired From Sad, New Career in Business, and another called Bury Me at Makeout Creek (a “Simpsons” reference, I guess.)

Puberty 2 is her first for the Secretly Canadian imprint Dead Oceans, and moving up in the ranks to a well respected indie label can be heard throughout the album—the production values are exponentially larger in comparison to her earlier work. On her first two records, she explored more of an esoteric post-Fiona Apple, post-Tori Amos caterwauling behind a piano; on Bury Me, she started to find her voice more as a “bandleader,” per se, growing more comfortable in adding loud, distorted guitars and pummeling percussion.

Throughout the album, Miyawaki mixes bits of the hazy, dreamy quality of many modern shoegaze bands with the knack for short, hook driven pop songs that share a similar aesthetic with girl groups. I think I wasn’t very far into my first listen of Puberty 2 when I thought that this is what Best Coast could have been had Bethany Cosentino not just fallen off completely with the band’s sophomore slump.


The album’s two lead singles, “Happy,” and the astoundingly good “Your Best American Girl,” also happen to be two of Puberty 2’s best tracks—which is not to say the other nine songs on the album are filler; they are anything but, save for the one misstep—the brash, acoustic explosion of “My Body’s Made of Crushed Little Stars.”

The glitchy, calm in its own nervy tension “Happy” calls to mind self-titled-era St. Vincent in its song structure; the follow up track, “Dan The Dancer” is powered with a garage rock energy that Miyawaki then switches up with the woozy slow jam “Once More to Be With You.”

Then album’s centerpiece is the aforementioned “Your Best American Girl,” which is, with out a doubt, one of the most impressive songs I have heard in 2016. Beginning unassumingly, Miyawaki allows the song to organically build through the song’s verse and pre-chorus before it beautifully and emotionally explodes in the song’s frisson inducing refrain.

And it’s not just indie rock theatrics on “Your Best American Girl”—Miyawaki has a point: “Your mother wouldn’t approve of how my mother raised me, but I do. I think I do. And you’re an all-American boy, and I guess I couldn’t trying to be your best American girl,” she howls assertively over the song’s incredibly slick production.

Following the halfway point on the album, it slows down with the self-deprecating, somber “I Bet on Losing Dogs,” and the skittering, pleading ballad “Thursday Girl” before picking up again with the pop-punk blast “A Loving Feeling.”

The album’s longest song is also its most poignant, and possibly most polarizing—clocking it at nearly five minutes is the ghostly dirge “Crack Baby”; a stark title as (according to Genius dot com) Miyawaki compares the need for happiness to drug addiction—“You know that you had it once, and you know that you want it back,” she says over heavy, pensive synths and drum machines.

And even before the album was released, Miyawaki caught flack for the song on Twitter—responding by simply saying it was written when she was a teenager and in a bad place, and that’s all she could divulge on the matter.

“Happiness” as an idea, or a myth, is a concept that runs throughout Puberty 2.  “Happiness fucks you. Happiness is up, sadness is down, but one’s almost more destructive than the other,” she has said in the promotional materials for the album. “When you realize you can’t have one without the other, it’s possible to spend periods of happiness just waiting for that other wave.”

Miyawaki successfully captures that up and that down and the waiting for that other wave on Puberty 2—a smart, thought provoking record, that tackles serious concepts by pairing them with a wide sonic landscape. Her fourth album in four years, it’s an impressive collection that shows a depth, growth, and maturity you rarely see in young performers.