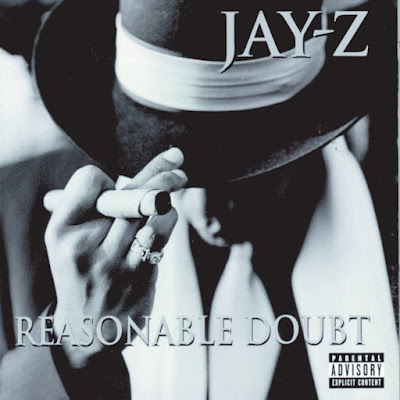 If it weren’t for the horrendous skits, or interludes, or whatever they are, that run throughout the album’s first half, and for a few key weak moments—looking specifically at the obnoxious “Ain’t No Ni**a”—Reasonable Doubt is an auspicious, and would be a damn near flawless, debut album.

It’s easy to forget, at least in 2016, that Jay Z was once an incredibly important figure in hip-hop. Now pushing 50, the last thing he committed to tape was the laughably bad Magna Carta Holy Grail; but twenty years ago, he was hungry—a former drug dealer, eager to flash the money he had already made, and fresh from escaping the Marcy Projects he so often speaks of in his early material.

By 2013, Jay Z had descended to depths that had him repeating the name “Tom Ford” over and over again, and talking about Miley Cyrus’ penchant for twerking; but in 1996, on Reasonable Doubt he seamlessly and effortlessly blended his love of luxury but his connections to the street.

The five song run that opens Reasonable Doubt is astounding to say the least—and twenty years later is pretty much unfuckwithable: “Can’t Knock The Hustle” serves as a bit of thesis statement for what’s about to occur and receives an added bonus in the form of Mary J. Blige’s smoky, authentic vocals on the song’s chorus. Then later, it’s the frenetic give and take between Jay Z and The Notorious B.I.G on “Brooklyn’s Finest”—featuring the memorable refrain of “Jay Z and Biggie Smalls, ni**a shit your drawers,” as well as one of Biggie’s most obvious and cutting digs at rival Tupac Shakur.

On “Dead Presidents II,” he interpolates Nas’ “Dead Presidents” into the refrain of the song, which is pretty funny, considering the contention between the two of them that would arrive years later; on “Feelin’ It,” he doesn’t necessarily get somber, per se, but he slows it down with the jazzy piano based track.

Later, it’s the mind-blowing swagger of “Can I Live”—the kind of timeless song that’s allowed the expression itself to live on a t-shirt that his wife would later wear; or the short “Friend or Foe,” where Jay talks himself out of a sticky situation.

As it heads toward the end, there’s the commendably gritty beat courtesy of DJ Premiere on “Bring it On.”

Reasonable Doubt doesn’t really lose steam after its second half, but it is certainly frontloaded with the best, most accessible material. However, it is also never inaccessible, but it’s also pretty rough and raw sounding at times in its production—microphone levels are all over the place, which only adds to its charm twenty years later.

It also captures Jay Z at a moment he’d never return to—within a year, he had traded up, embracing an exponentially more commercial and less gritty sound by enlisting the likes of Puff Daddy to produce tracks for In My Lifetime, Vol. 1, then reaching even higher with the infamous In My Lifetime, Vol. 2, featuring some his biggest hits at the time—“Can I Get A (Fuck You)” and “Hard Knock Life.”

Jay Z “retired” in 2004, following the release of The Black Album, only to return a few years later with the tepid Kingdom Come and the radio friendly Blueprint III, before exhausting all of the good will of his fan base with Magna Carta.

The sense of urgency he exhibited on Reasonable Doubt is inline with the same kind of demand Nas showcased on his debut Illmatic—coincidentally, it’s really a feeling neither of them returned to, or a sense they were able to achieve again throughout their career.

Whether you are hearing it for the very first time, or revisiting it twenty years after you first heard the heartbeat sound effect in the skit that opens “Can’t Knock The Hustle,” Reasonable Doubt is a fascinating, compelling, and impressive listening experience that pulls you in—less grimey sounding than other New York hip-hop of the time, but no less clever in its wordplay and flow, and no less important in the legacy it has left behind in its wake. 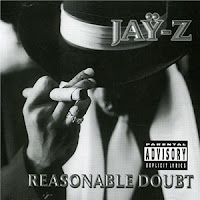 Postscript: It seems worth noting that in preparing for this piece, images of the original cover art to Reasonable Doubt showed up in my Google Image Searches. The most common version of the album was reissued in 1998 with a slightly amended tracklist, but the original version, now long out of print, features a different font on the cover, and an umlaut over the "Y" in Jay Z's name, which is something I don't really understand.
Labels: 1996 20th anniversary album review hip hop jay z jay-z nostalgia poorly written thinkpiece rap music reasonable doubt review