Album Review: Band of Horses - Why Are You OK? 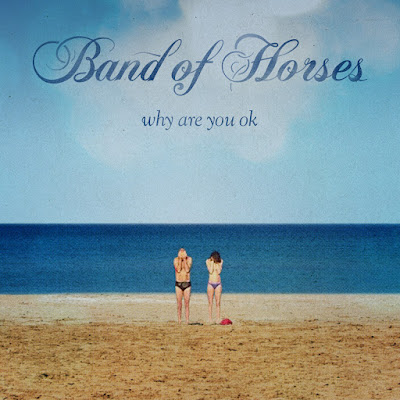 One could make a somewhat compelling argument against Band of Horses—writing them off as yet another indie rock casualty of the mid-2000s that peaked right out of the gate (no pun intended there) and have been on a downward trajectory ever since.

It’s hard to believe it’s been a decade since the Band released its auspicious debut, Everything All of The Time, an evocative amalgamation of alternative country twang and a loose, jam band aesthetic.

Things fell apart pretty quickly—the Horses were originally Ben Bridwell and Mat Brooke, both formerly of the Pacific Northwest lo-fi folk outfit Carissa’s Wierd, along with bassist Chris Early and drummer Tim Meinig, who were dismissed from the group shortly after the recording of Everything was completed; and soon after its release, Brooke also left.

Over the course of the last ten years, Bridwell has moved away from the playful sound of the first album, and eventually jumped ship from Sub Pop for the major leagues, releasing the group’s bombastic, deliberately hook-driven third album, Infinite Arms, on Columbia in 2010.

I liked Infinite Arms quite a bit at the time it was released, but I did not much care for its tepid follow up, 2012’s Mirage Rock—so at that point, I was ready to write Band of Horses off completely as yet another band that was good, served their purpose, and then promptly fell off.

Following a four-year hiatus, Bridwell and his assembled players have returned with the Jason Lytle produced Why Are You OK?, the band’s fifth album, and first released for Interscope.

Incorporating drum machines and synthesizers into its array, much like Infinite Arms, Why Are You OK? is another “big” sounding record. The production on the drums is crisp and tight, and the guitars ring out—especially on the second half of the album’s epic opening track, and on the first single “Casual Party.”

The more I assess Why Are You OK? the more I realize that on this album, Band of Horses seem to be suffering from a possible songwriting rut—or at least, struggling to shake their “sound” enough to generate something original: “Casual Party” is damn near a direct copy of the Infinite Arms anthem “Laredo,” and the lyrically insipid “In A Drawer” evokes, whether it means to or not, Infinite Arms’ “Dilly” within its structure.

In the album’s second half, the band brings the country stomp on the rollicking “Throw My Mess,” and changes the pacing with the slow burning and shimmering “Whatever, Whenever,” and the equally as slow burning, yet more theatrical closing double shot of “Barrel House” and “Even Still.”

Why Are You OK? isn’t necessarily a bad album, but it’s also not really a good album either—it, like many records before it, is something that simply exists. It’s a mid-career entry by a marginally popular indie rock/alt. country outfit that has seen its share of tumult over the last ten years.

Frontloaded with its most accessible material, this half of the record, at least, serves as the perfect summer soundtrack for your get together for wearing flannel, discussing beard grooming techniques, and drinking PBR from tall cans. Sure, Why Are You OK? has its moments, but overall, it lacks the emotional and musical weight of Band of Horses’ earlier material, unfortunately making it another forgettable record released in 2016.

Why Are You OK? is out now via Interscope.
Labels: album review alt.country band of horses indie rock new album new release review sub pop why are you ok