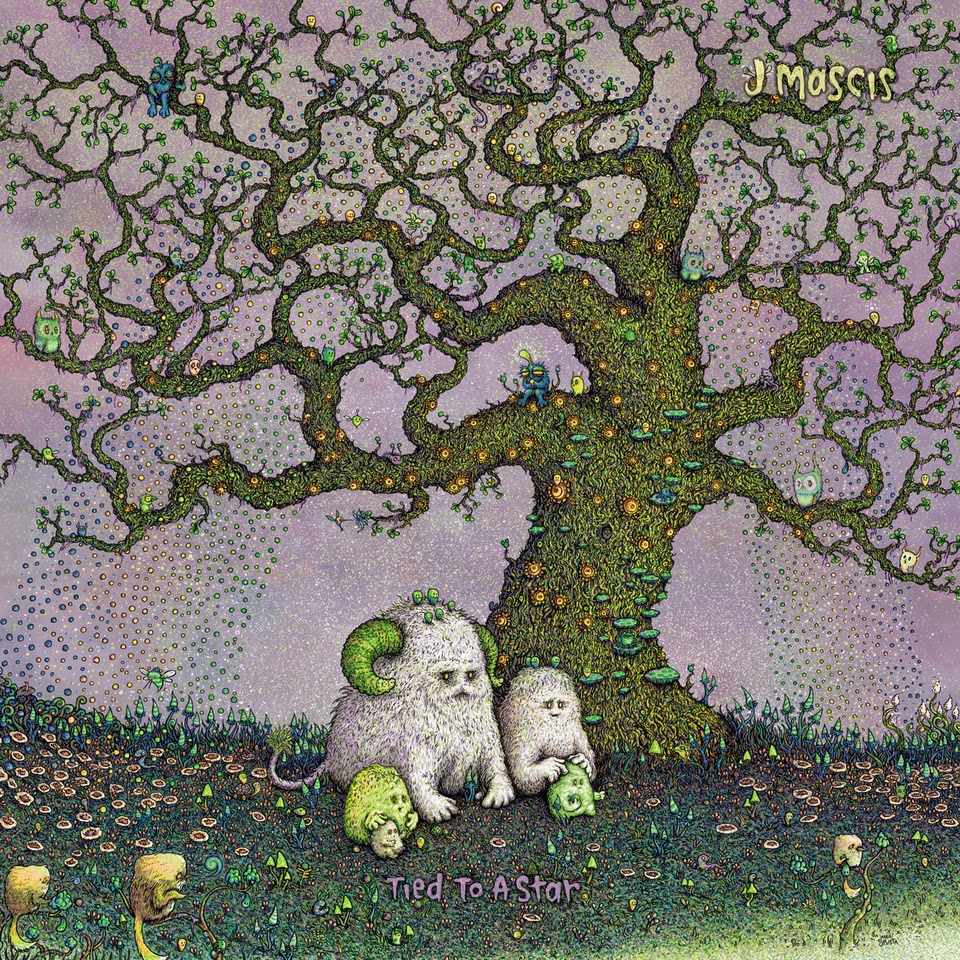 If you were too young to listen to, or at least be aware of, Dinosaur JR during their initial run in the 1980s, prior to the departure of bassist Lou Barlow, you may at least be familiar with their 1994 “Buzz Bin” video for the single “Feel The Pain”—a clip that featured frontman J Mascis driving around New York City playing golf. It was this song that got my attention, and three years later, I found a remaindered copy of the album it comes from, Without A Sound, at a Best Buy in Rockford IL, then attempted to dive into their 90s discography with mixed results.

Despite my minor interest and flirtations with Dinosaur JR for, like, half of my life, I can’t say that I am I am a huge fan of the band—specifically their latter day output after reuniting in 2007. So I don’t have that hard of a time believing that I nearly slept on this new, relatively solid, if not a tad samey sounding, solo joint from Mascis, Tied to A Star, but after listening to it, I’m glad I didn’t. I mean, it’s not, like, life affirming or anything, but it treads into the territory that his solo debut LP from 2011, Several Shades of Why did. Tied to A Star finds Mascis plaintively plucking and strumming an acoustic guitar, while his trademarked Jazzmaster electric soloing and guitar freak-outs take a backseat.

Tied to A Star begins incredibly strong, and almost plays its entire hand too early with a song that seems to arrive at the perfect time of year (late summer, early fall)—“Me Again” is structured around a stripped down arrangement of acoustic guitars and piano. It’s somber and nostalgic enough to evoke images of leaves turning colors and gently falling to the ground, but also rhythmic and catchy enough to showcase that Mascis is a great songwriter deep down.

Later, it’s the similar plaintive plucking, this time accompanied by Chan Marshall (aka Cat Power) on guest vocals, on the downcast “Wide Awake.”

However, despite numerous noteworthy moments, the issue with Tied to A Star, as is the issue with most Dinosaur JR albums, is that Mascis sticks to his very specific “sound,” and in doing so, it becomes a bit of a stagnant listen, due to the lack of variation. And on more than a few occasions, possibly because of the very nature of a mostly acoustic-driven album, it veers head first into “adult contemporary,” Cities 97 territory—specifically on the instrumental tracks, with the shuffling of “Drifter,” (which, for the record, is like, the weakest track on here) and big jammy strums of “Heal The Star.”

For serious fans of Dinosaur JR, and J Mascis’ slight diversity with these introspective sounding solo albums, Tied to A Star will certainly deliver. But for the casual or passing listener, it is not exactly a fulfilling album, and it seems to suffer from the same fatal flaw that numerous other records released this year have: in the end, it’s just not that captivating. It has a start, it has an end, and in the middle there, it just kind of happens in front of you, and doesn’t ask a ton of you. And it’s because this is not much of an active listening experience, I hesitate to say that it is a completely forgettable record, but much like Mascis’ solo debut, I don’t see myself returning to this for leisure listens in the near future.

Tied to A Star drops on August 25th, via Sub Pop.