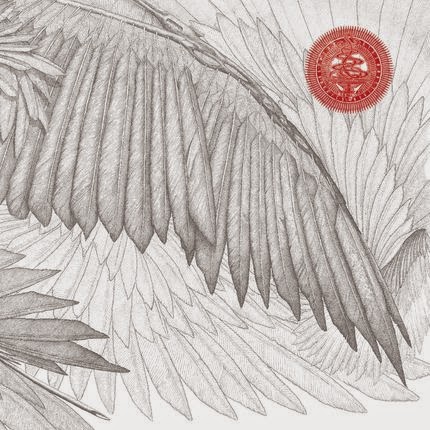 In an incredibly sharp contrast to the low key, atmospheric post-trip hop and dubstep influenced vibes of King Midas Sound, English producer Kevin Martin has returned to his “The Bug” moniker, and on Angels & Devils, he evokes two feelings, and two feelings only—tension and aggression.

There are moments on Angels & Devils where it feels like you are waiting for the impact of a horrific car accident (like on the extended organ drone of “Pandi”), and there are moments where you get so worked up, you just want to start a fight with someone. It’s a confrontational, abrasive record, and even when it shows hints of incredibly calculated restraint, Martin holds absolutely nothing back when it comes to the full on sonic assault.

Expanding on the theoretical genre Martin calls “Acid Ragga,” a juxtaposition of elements from Ragga Dancehall and Acid House music, Angels & Devils is a listen that is not for the faint of heart, specifically as the record progresses into the second half—six songs that are practically too much to handle, with the first half being structured in such a way that builds the tension leading up to an angry release on “The One,” a track that explodes with machine gun fire snares and blaring synth blasts, and then peaks with probably the most abrasive track, “Fuck a Bitch,” a song that boasts a guest appearance from the now defunct Death Grips. “ “What ‘choo know about how I fucks with it?” MC Ride yells as the beginning of the song, even before the music has really kicked in, as if there was even any question that MC Ride is not to be trifled with under any circumstances.

Despite how militant and combative Angels & Devils can be, it’s actually that fact that makes this album such a compelling, interesting, and worthwhile listen if you are able to work past the initial layers of resistance Martin puts up. And despite how serious this can all come across, Martin himself has an amazing sense of humor (just follow him on Twitter)—also, I am fairly certain “Fat Mac” is not an “It’s Always Sunny in Philadelphia” reference, but one can’t help but think that.

I think it goes without saying that it’s an “acquired listen,” and it’s certainly the kind of record that you have to be in the right frame of mind to thoroughly enjoy. And even then, if you’re in the frame of mind to be like, “Oh I want to listen to this super aggressive album by The Bug,” by the time the final strains of “Dirty,” echo out into the distance, the only thing you’ll want to do is royally fuck some shit up.

Angels & Devils is out now on Ninja Tune.