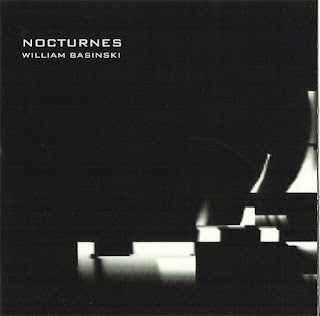 I’m uncertain of William Basinski’s creative process. Many of his ambient or experimental compositions are all comprised of loops and field recordings made over 30 years ago. Case in point is the first half of his new two-song LP, Nocturnes. The title piece is constructed out of prepared piano loops recorded in 1979.

Does dude just sit around, making loops, thinking, “Yeah, this is gonna be awesome when I release it 30 years from now.”

No matter what his creative process really is, “new” music from Basinski is always welcome. Still riding a victory lap off of the 10th anniversary reissue of his seminal The Disintegration Loops series, introducing his work to an audience that missed it the first time around (myself included), Nocturnes continues the overall underlying sense of terror and dread that his stand-alone pieces usually have.

The title piece is roughly 41 minutes of roughly the same three sounds playing in roughly the same order—I say roughly, because throughout the 41 minutes, subtle changes come and go. The piece has a tendency to lull you into its rhythm, so when they changes to come, it’s somewhat surprising and jarring.  “Nocturnes” is an exercise in restraint—while some of Basinski’s past loop-based pieces get out of hand at times with walls of noise, et. al, this remains relatively steady, although it does grow slightly louder as it nears the halfway point.

The second piece, “The Trail of Tears,” is culled from much more recent material—tape loops and delay recordings from 2009. It’s also slightly shorter, clocking in at just less than 30 minutes. I stop short of using the word “optimistic” to describe anything by Basinski, but at least the first section of “Trail” is exponentially less ominous when compared to the first track on the record. However, in the last ten minutes or so, the piece switches gears, and things become very, very unsettling, before the loop slowly fades away.

Nocturnes is Basinski’s first “new” effort since 2011. The reissue treatment given to The Disintegration Loops certainly raised his profile quite a bit. Basinski never phones anything in—his compositions are always unique and original. Overall, I did find that Nocturnes lacked the immediacy that much of his latter day work carries—like the 9.29.82 series, “The Garden of Brokenness,” and “El Camino Real.” I connected with all of those right away. I did not dislike the two pieces that make up Nocturnes, but it was less of an emotionally draining experience to listen to them. While that may sound like a relief to some, I listen to William Basinski because I want to take something away from it when I am finished. Or in some cases, leave a part of myself behind.

Nocturnes is available now courtesy of Basinski's own 2026 imprint.