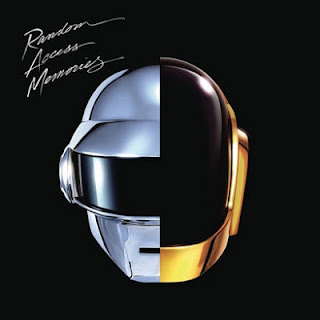 In the dark ages of 1997, when MTV still was known to play music videos, there was a late night program on Sunday, at 2:00 a.m., after 120 Minutes had ended, entitle AMP. It was an hour block of videos dedicated to electronic, techno, and house music—all emerging genres that were getting mainstream attention in that year.  It was on AMP that I first saw the video for “Da Funk,” by the French duo Daft Punk.

“Da Funk” is an iconic song now, accompanied by a bizarre video that involved a guy wearing a dog mask—it kind of looked like McGruff the Crime Dog. Daft Punk were known for their videos—the follow up single, “Around The World,” involved a ridiculous amount of precision choreography. And then there’s the animated video for “One More Time,” featuring footage from an Anime film they helped create.

It’s been a minute since Daft Punk has released a proper studio album—since 2005, actually. And in that down time, the clamor and interest in them has only grown, thanks in part to their batshit insane live show from 2007. And apparently the critical tides have changed—Pitchfork panned both 2001’s Discovery and its follow up, Human After All, but they’ve gone out of their way to cover every aspect of Daft Punk’s return—Random Access Memories (they also gave it an 8.8 out of 10.)

Daft Punk, for the most part, made pretty futuristic house/electronic music, and for a duo that dresses up like robots, it makes sense. But all that is gone now on Random Access Memories, and it’s been replaced by….I don’t even know what to call it. The album itself is an apparent homage to the L.A. sound of the late 70’s and early 80’s, and their style takes a dramatic shift—using session musicians and real instruments, as opposed to just a ton of keyboards and laptops.

Like, am I supposed to take this seriously? Because, for real though B, this is really terrible. This is so terrible I can barely bring myself to listen to it. With confidence, I can say that it has been a chore attempting to listen to this record to write a review of it.

R.A.M makes heavy use of its guest stars—most notably Nile Rodgers of Chic and rapper/producer Pharrell Williams. It also features guest spots from pianist Chilly Gonzales, and Strokes lead singer Julian Casablancas, who appears on the song “Instant Crush,” which is the most likeable of this bunch.

For an album that opens with a song called “Give Life Back to Music,” R.A.M is dead on arrival. The “homage” that Daft Punk has attempted becomes (unintended I’m sure) satirical, and laughable at times. It seems like it is doing a poor job of walking the line between not taking yourself seriously, and taking yourself entirely TOO seriousy. It’s also boring beyond belief—and the nifty production tricks grow old after you’ve heard them the first time. Like, why is every vocalist featured on the album vocoded into oblivion?

Random Access Memories is a horrible album, and I genuinely feel bad and embarrassed for everyone involved in the making of this record.