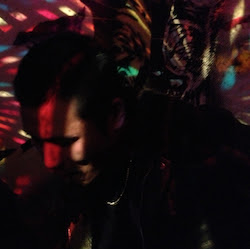 I received a text message from a friend of mine the other day that simply said, “Have you heard of this guy?” Accompanying that was a link to an NPR story.

The NPR story turned out to be about Alex Zhang Hungtai, who performs under the name Dirty Beaches. Dirty Beaches is a name that I see a lot in stories on Pitchfork, but I had also lumped it in with bands that have names like Dirty Projectors, Cloud Nothings, and Beach Fossils. Hungtai has nothing to do with any of those bands.

I can’t even begin to describe the kind of music that Dirty Beaches is capable of producing. In a message back to my friend, I mentioned to her that I found the new Dirty Beaches double LP Drifters/Love is The Devil to be incredibly inaccessible to a casual listen. But I also thought I should give it another shot and write about it for the blog.

Drifters/Love is 16 songs deep—8 for each album. There’s a definite distinction between the two—Love is The Devil is primarily ambient, experimental droning. Drifters, on the other hand…I don’t even know. It’s noisy, claustrophobic, somewhat terrifying, and somewhat unsettling. The lo-fi as fuck production values are reminiscent of pretty much ANY artist that has used a four-track recorder, or has purposefully made music with shitty production values. The blown-out sound is akin to that of Love Remains, the debut album by How to Dress Well.

Drifters is covered in reverb. Soaked is maybe a better word. Every word mumbled, every cheap sounding drum machine track, every note—it all ends up so layered, the songs evoke a feeling, rather than just being a three-minute pop song with lyrics you can understand.

Hungtai’s singing voice is low. On the tracks he does sing on, it’s heavily distorted and nearly impossible to understand what he’s saying. On the opening one-two punch of “Night Walk” and “I Dream in Neon,” his low growl is very similar to that of truck driver turned musician Daughn Gibson. Drifters ends with two shouty tracks, “Aurevoir Mon Visage,” and “Mirage Hall,” before launching into the instrumental closer, "Landscapes in The Mist,” which is pretty much the soundtrack to every nightmare you’ve ever had, if they were all written and directed by David Lynch.

Love is The Devil, as a whole, is much more restrained than its companion album. However, at times, the songs on Love feel like they are just sketches or ideas that were never full realized—such as “Woman,” which is just like four minutes of some cool keyboard beeps and boops, with other eerie noises over the top of it. While none of the songs on Love become as unhinged as a few on Drifters, that doesn’t mean they are any less unsettling. “This is Not My City” captures an underlying sense of dread pretty well. A little TOO well if you ask me.

In the NPR interview for “All Things Considered,” time is spent discussing Hungtai moving around a lot as a child, and how his inability to settle in one place still affects him now, as well as his songwriting. It also talks about nostalgia—an old photo of his father performing in a doo-wop band—and how he has made an older sound his own. All of this is super apparent on his debut full length, 2011’s Badlands. While there are faint traces of this on the new double LP, his influences are less obvious.

After a closer listen, Drifters/Love is The Devil is still not an easily accessible record. I have to chuckle a little at Hungtai’s profile on NPR—certainly this will expose him to an audience that otherwise would not be aware of him—at the same time, I have a difficult time picturing a typical NPR listener identifying with, or even liking, this music. If you are patient, and want to be challenged by what you listen to, this may be the album for you. It’s by no means bad, but it’s almost so experimental and uninviting that it keeps you at an arm’s length.

Drifters/Love is The Devil is available now courtesy of Zoo Music.