Album Review: The National- Trouble Will Find Me 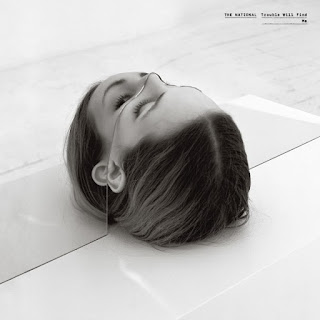 A quick history on The National—originally all hailing from Ohio, coming together as mutual friends, the band consists of two sets of brothers, and one incredibly tall and unhinged frontman. Relocating to Brooklyn (where you go to start a band) and working day jobs through the original dot com burst of the early 2000’s, they released their self titled debut in 2001.

Over the course of the last twelve years, they’ve really grown into the sound they were meant to find—starting out as a bit of a scrappy alt-country act, they slowly shifted away from that, and by 2005’s Alligator, you can really hear the turning point. Alligator, their first album on Beggar’s Banquet (later 4AD), put them on the larger radar with listeners—i.e. the Pitchfork set. 2007’s Boxer garnered them even more indie attention, and 2010’s High Violet was enough to push them into mainstream success.

Trouble Will Find Me, the band’s sixth full-length continues their maturity into the roles they’ve been assigned as somewhat “elder-statesmen” of indie rock. It also shows their continued growth as songwriters and musicians. The thirteen tracks on Trouble are the next logical step from High Violet—complex arrangements, hyper-literate lyrics, and a more direct focus on melody—overall, a “larger” sound, but not a sound of excess. It’s a sound that the band has an excellent handle on controlling.

You can chastise The National for making some kind of variation of “dad rock” (they don’t, however), or that all their lyrics are about white people having white person problems, middle class people having middle class problems, or just first world problems in general. That, to an extent, is all true. And those are all kind of the same thing. Maybe the reason I identify so much with many of The National’s songs is because I AM a middle class white person and I have so many white, middle class problems. Frontaman Matt Berninger’s unique speak/sing vocal stylings has grown more confident over the course of the last eight years, and his lyrics only grow more intelligent. They can be mysterious and ambiguous—just little sketches of ideas or emotional concepts. Or they can be direct, and absolutely heartbreaking.

Lyrically, Berninger is at his finest through various points of Trouble Will Find Me. Here are some examples:

“You didn’t see me, I was falling apart. I was a white girl in a crowd of white girls in the park.”

“Remember when you lost your shit and drove your car into the garden? You got out and said I’m sorry to the vines and no one saw you.”

“As the free fall advances, I’m the moron who dances.”

“I’ll be a friend and a fuck up, but I’ll never be anything you want me to be.”

Musically, this finds the band venturing into slightly new territory, while expanding on the sound that they honed on High Violet. The new elements include a drum machine, a harmonica, and on many songs, some echoy synthesizers, which add an interesting texture. The band continues to include more than just the standard “rock band” instrumentation in its songs—for the last four years, The National have toured with horn players, and almost always have string arranger Padma Newsome with them. More and more of their songs are written to include wind or brass, or strings—something that only was included every once in a while on their earliest material.

As an album Trouble Will Find Me is just shy of an hour, which is just about the perfect length for a long player. It’s the longest set of tunes they’ve had since Alligator (13 songs), and it seems like the structure was labored over, as far as the ebb and flow of each song, as well as specific sections of the album.  At a quick glance, it seems like it is divided up into four parts—tracks 1 through 4, 5 through 7, 8 through 10, and then 11 through 13.

Trouble opens with the slow burning “I Should Live in Salt,” a song that seems to have unseated “Runaway” as the opening song of their live set. It’s a big song, reaching for heights on the refrain, “I should live in salt for leaving you behind.” Opening up the second section, “Sea of Love” is as close to a “Terrible Love” as you’re going to get on this album. It’s pretty much all build up, with a brief pause for Berninger to mumble out the words, “If I stay here, trouble will find me.” The build up explodes about two minutes in as overlapping lyrics and voices come crashing down, bringing the song to a sudden end.

The National- "I Need My Girl"

The pacing of Trouble Will Find Me slows a bit in the middle—on “Heavenfaced” you definitely get some Bono-vibes from the vocals. As it heads into the finale, Trouble hits a stride as far as really sad songs with really self-deprecating, self-doubting lyrics. “I Need My Girl” and “Pink Rabbits” are probably the two finest examples of this, as well as two of the finest songs on the entire album.

As Trouble ends, there’s not “big” finish as there was on High Violet—with the one-two punch of “England” and “Vanderlyle Crybaby Geeks.” “Pink Rabbits” is a slow, cloudy waltz, that slides into “Hard to Find,” a beautiful, shimmering closing track, more in line with “Gospel,” the final song on 2007’s Boxer, than any other album closer in their canon.

Trouble Will Find Me is an album made by adults, for adults to listen to. The National, as a whole, are not a young person’s band. In making a sweeping generalization, I’d say that there aren’t too many people under 25 that are into this band.  They are a band that continues to grow up—they certainly aren’t as shouty as they were eight or more years ago—and their listeners are growing up with them. Lyrically, Trouble Will Find Me, leans towards a more ambiguous, less personal side, in comparison to the very personal lyrics from High Violet. Throughout the ambiguity though, you can tell that there are moments that are pulled from real life; they are usually sad, and I usually identify with them a little too much.  Trouble Will Find Me, as a whole, is not as immediate of an album as High Violet, but it’s an exciting, interesting, and thought provoking record.