Review: Nick Cave and The Bad Seeds- Push The Sky Away 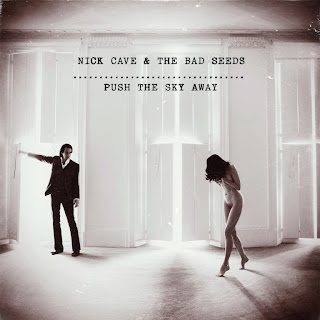 In General, Nick Cave and The Bad Seeds predominantly create tense, reserved, gothic “alternative” rock. Save for the few explosive songs here and there, their canon is relatively somber, and Cave’s very low, ominous speak/sing voice lends itself well to that.

It’s been a minute since The Bad Seeds have put out a new record. 2008 saw the release of Dig Lazarus Dig, a relatively awful, bombastic rock album—carrying over many traits from Cave’s “mid-life crisis set to music” The Grinderman. Grinderman saw Cave abandoning his main instruments of the organ and piano, strapping on a guitar, and writing songs like “No Pussy Blues.”

Grinderman is long gone now, put to rest after two albums. And Push The Sky Away is a welcome return to form for Cave, reuniting with The Bad Seeds. It’s a relatively short affair—nine songs spanning a little less than 45 minutes. But that’s quite enough time to spend with Mr. Cave, because damn, this is one seriously dark affair. There’s a foreboding tension and dread that runs throughout the record, and it specifically shows in the album’s outstanding first and second singles, “We Know Who U R,” and  “Jubilee Street.”

Physically speaking, Nick Cave seems like an unlikely lothario. Over the course of his 30+ year career, whether fronting The Birthday Party, or later on The Bad Seeds, his hairline continues to recede, the length continues to grow in the back; he’s skinny, pale, and often experiments with questionable facial hair. But Cave has been known to sneak in strange, off putting, sexually charged lyrics—my wife has always been a little iffy on Nick Cave specifically because of the lyric, “I put one hand on your round, ripe heart. And the other down your panties,” from the song “Babe, You Turn Me On,” found on his double album Abattoir Blues/The Lyre of Orpheus. 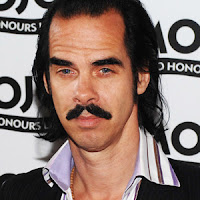 Cave plays the sleaze card in the opening lines to the albums’ fifth song, “Mermaids”, “She was a catch, We were a match, I was the match that would fire up her snatch.” It’s tenderly and earnestly sung, but the first time I heard it, I did a double take to make sure I had heard him right. The rest of the song is actually quite gorgeous, built around swirling, partially reversed guitar work.

“Mermaids” splits the album in half, and the second half of the record begins with the Wikipedia-name dropping, menacing bass driven, edgy as all hell “We Real Cool,” which leads right into the album’s most bizarre track—a self-referential spoken word piece called “Finishing Jubilee Street.” It’s about exactly what the title says—Cave walks you through what happened to him in a dream after he finished writing “Jubilee Street.” A meta-moment like this, coupled with the mention of Wikipedia paints an interesting, modern picture of Cave—a man who doesn’t seem to give a shit one way or the other about technology, modern popular culture, etc. In a way it almost humanizes Cave as somewhat of a regular person, as opposed to the dark, shadowy lecher he wants to come off as.

The double shot of “Finishing,” and the following track, “Higgs Boson Blues,” slows the pacing of the record a bit. “Higgs” is a sprawling, strange narrative, where at one point, Cave uses Hannah Montana as a character within the song (another interesting pop culture reference to work in, coming from a 55-year old former heroin addict.)

The record closes out with the title track, “Push The Sky Away,” a slow burning song that continues on with the theme of tension found throughout, built around somber organ drones.

I would say to anyone not familiar with Nick Cave that he is an “acquired taste.” His low, speak/singy delivery may not be for everyone. And certainly the heavy gothic tone of The Bad Seeds’ canon is not readily accessible to a casual listen. Push The Sky Away is a very complex, weighty record. As short as it is, it requires multiple listens to work your way through the layers, and it is most definitely not a “feel good” record. It’s not a “feel bad” record either. It’s moody and distinctive, and demands your full attention while you listen.

Push The Sky Away is available in the United State on Tuesday, February 19th, via Cave's own Bad Seeds LTD imprint. You can purchase various editions of it via his website.