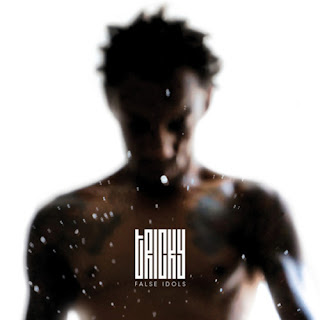 My first experience with Tricky was on Valentine’s Day, 1997.  I was home sick from school, and I had just gotten a copy of Tricky’s sophomore release, Pre-Millennium Tension. Buried under the covers, a little out of it from whatever cold medication I was on—I was completely unprepared for the claustrophobic and terrifying atmosphere on the record.

It was a record I wanted after reading a four-star review of it in Rolling Stone, and after seeing the video for the single “Christiansands” on “120 Minutes.” For the longest time, I still wasn’t “into” the album. It frightened me, actually. Sure there were some accessible songs, and two singles that were released, but the final half of the record is…something else. It took me well into my 20s to be “ready” to listen to and accept Pre-Millennium Tension.

Tricky, as an artist—one could argue that he fell off around 1998, with the release of his third record, Angels With Dirty Faces. Some would ague that he fell off with Pre-Millennium Tension, and some would say the only good album Tricky produced was his debut, 1995’s Maxinquaye. Tricky, as an artist, got his start in the early 1990s as part of the Bristol-scene that gave birth to the Wild Bunch—later known as Massive Attack. Along with Massive Attack, and artist like Portishead, he helped create and define a genre known as trip-hop.

As a temperamental artist, in the wake of the release of his debut, Tricky parted ways with Massive Attack, and proceeded to run from the label “trip-hop.” For a record recorded in Jamaica, Pre-Millennium Tension is one of the darkest fucking records I have ever listened to. Nothing since 1997 has come close to how uncomfortable and suffocating of a sound Tricky achieved.

After 1998, things started to go downhill—Tricky, claiming he wasn’t compromising his sound to make the music that people wanted him to make, released some really awful records. But like many artists that I have had continuing affection for, every time Tricky pops up with a new release, I take note. And every time, I’m relatively disappointed.

Tricky’s last record was released in 2010—less than a half hour long, largely forgettable. In the time that’s passed since then, I was wondering what he was up to. Now I know. On Wednesday, it was announced that Tricky had completed a new album, titled False Idols, and that it would be released in May. The first single was also released on Wednesday—given away for free on his website.

“Nothing’s Changed,” is not a “return to form” for Tricky. I think the only thing that could ever be called that was if he released an album that sounded exactly like Maxinquaye or Pre-Millennium Tension. However, “Nothing’s Changed,” the lead single off of False Idols is the most promising thing he’s put out in a LONG time. It’s not claustrophobic in sound, but it’s dark, and that’s a good sign.

One of the fascinating aspects of the single is that it’s a meta-single. I’ve never known Trick to be self-referential, but on “Nothing’s Changed,” a majority of the lyrics are comprised of material from the song “Makes Me Wanna Die,” the second single off of Pre-Millennium.

The rest of the lyrics seem like a response to words that he had written 12 years ago—in the former, the words are “…says if I change my stride/then I’ll fly.” He answers now with “But nothing’s changed/I feel the same/It’s just shorter days/I still hurt the same.”

During his run in the early 90s, Tricky collaborated quite often with his then-muse, and then-girlfriend Martina Topley-Byrd. Their partnership ended a long time ago, and while they share a child together, I never really know where their relationship is. She’s popped up occasionally for a guest appearance on some of his recent albums, and I believe last year, the two were touring together, performing Maxinquaye from start to finish. It’s Topley-Byrd’s voice that we hear on “She Makes Me Wanna Die.” Her voice was one of elements that make Tricky’s early material so great.

Here, on “Nothing’s Changed,” she’s unfortunately been swapped out for vocalist Francesca Belmote. Nothing against Belmonte—she’s a fine singer, but I feel at times she’s trying to do her best impression of Topley-Byrd.

“Nothing’s Change” is powered by a steady programmed beat, a bassy synth line, and strings that sweep throughout. As mentioned early, the oppressive atmosphere has long since raised on Tricky’s music. There’s heaviness to this song, and a glaring sadness throughout. It’s too soon to tell if this is reflective of the entire record, but Tricky currently has my full attention.