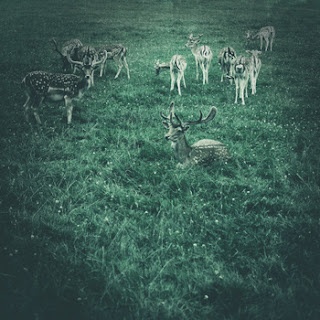 First thing’s first—let’s talk about the title of this record. Saudades, according to the Internet is: A Portuguese word that has no direct translation in English. It describes a deep emotional state of nostalgic longing for an absent something or someone that one loves. Moreover, it often carries a repressed knowledge that the object of longing will never return.

Saudades is less of an album, and more of an experience. It’s strictly for your headphones, so you can hear every subtle nuance—and believe me, there are quite a few.

It would be easy to say that the duo of Melodia makes experimental or ambient music. This is more like a sound collage—traditional instruments, tape loops, field recordings, voice samples taken out context, and more are blended together to create a completely unique record.

Melodia is comprised of Argentinian Federico Durand—who most recently collaborated with American experimentalist Nicholas Szczepanik on a two-track album similar to this one, released last fall, called Luz. Durand is also a solo performer, who has quite a few sound collage records to his name. The other half of this duo is Tomoyoshi Date, a Japanese ER doctor who moonlights as a musician in the experimental, or “modern classical” genre. The two, an admirer of each other’s work, toured together last year where the idea for this collaboration began.

In listening to Saudades, as with a lot of experimental music like this, I wonder how it is composed. If it’s all improvised, if it’s improvised with an outline of what should occur, or if this is just that well thought out in advance that it feels organically created.


Saudades is five tracks, and is slightly over a half hour. It’s a record that is constantly changing. Each piece works its way through various patterns and rhythms, and there are also familiar elements that are present throughout—bells, for example, either real or synthesized, occur in almost every track.

Along with the work of the aforementioned Szczepanik, as well as that of William Basinksi, Saudades stays true to its name, and Melodia have crafted an emotional nostalgic state. While not as overwhelmingly sad as Basinski’s work—I’d go so far as to say the closing track, “Music Box for Nils and Noe” is borderline playful, this record is can be gorgeous, somewhat unsettling, and completely evocative.

Saudades is available now in mp3 format to download, courtesy of the Luxembourg based label Own Records. From their Bandcamp page, you can also pre-order the limited edition vinyl, which ships at the end of the month. After the currency conversion, it costs roughly $26 to buy the record and get it sent to the states.