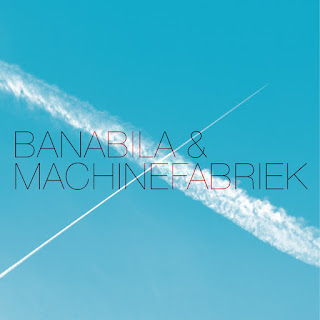 In music, collaboration can form even when the two artists in question aren’t in the same room. A decade ago, The Postal Service made headlines as an album created out of mailing DATs back and forth between parties. Now, thanks to the countless advances in technology, artists can collaborate by simply emailing each other mp3 files.

Through the process of file swapping, the album, aptly titled Banabila & Machinefabriek, is the result of the collaborative efforts of Michel Banabila, and of Rutger Zuydervelt, who releases music under the moniker Machinefabriek. Banabila has been at it for thirty years, while Zuydervelt has only been alive for slightly over thirty years—his first releases coming in the early 2000s via self-released CD-Rs. Both are “experimental” artists, and over the course of their respective canons, they refuse to be pigeonholed into one area of the genre—there are elements of ambient, drone, harsh noise, down tempo, trip hop, straightforward electronica, sound collage, and more.

In listening to B&M, it’s difficult to tell which artist contributed which idea you are hearing, which is one of the unique things about it. And the eclecticism of each artist’s sound makes for a very interesting musical landscape, e.g.: the seventh track on the record, “Flares,” uses field recordings, and various other non-threatening sounds. That is juxtaposed with the eight track, “Bad Wiring,” which builds an ominous glitchy drone that descends into harsh noise just passed the three-minute mark.

Another one of the unique aspects of B&M is how it’s structured—the compact disc version is one long seamless track—but the digital version is split up into nine individual files. The reasoning behind the presentation on the disc isn’t because all the songs blend one right into the other—it’s quite the opposite. Each piece comes to a distinct end before another one begins. The reason is so that you don’t skip around between songs—it’s meant to be taken as one uninterrupted trip.


Like all excellent experimental music, Banabila and Zuydervelt are constantly blurring the lines between beauty, peace, and horrific dread. Often, they come at you all at once, overlapping. The dread, at times, is almost too much—the waves of noise in “Frost” are unrelenting. But when there is beauty, like in the opener, “Ascend,” it disappears as quickly as it appears—so hold onto it while you can. Banabila & Machinefabriek is an intense experience; a roller coaster through various evoked feelings set to a mind-bending sonic landscape.


Banabila & Machinefabriek is a self-released record, available to purchase from either Zuydervelt's or Banabila's respective Bandcamp pages. While you are there, take a listen to their respective solo canons. There is some excellent stuff going on from both of these dudes.

Also, full disclosure, I was contacted personally via Facebook by Rutger Zuydervelt himself, who asked if I would be interested in taking a listen to this record and writing a piece about it for the blog. I have yet to figure out exactly how a legit musician from the Netherlands discovered this site. When I asked, he said someone he knew posted a review from it on Facebook. So, I guess people are reading this?