Hot New Joint: David Bowie - "The Stars (Are Out Tonight)" 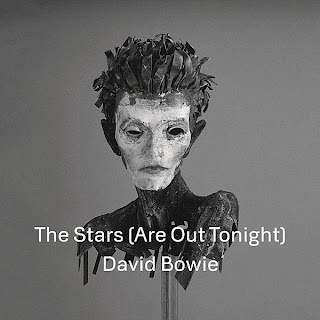 It took me maybe three or four listens until the new David Bowie single, “The Stars (Are Out Tonight),” clicked with me. It’s a sharp contrast when compared to the first single from his forthcoming new album. While “Where Are We Now?” was slow moving and overcast in a somber tone, “The Stars” is a more traditional Bowie rock song—it moves very quickly, the vocals are a tad shouty, and buried beneath the layers of electric guitar, there’s a simply strummed acoustic guitar driving the rhythm forward.

I wanted The Next Day to be an entire album made of up songs as sad as “Where Are We Now?,” but I know that is not the case. Producer Tony Visconti has gone on record saying it’s a “rock” record, and that he personally was perplexed by Bowie’s choice of the first single.

Lyrically, “The Stars” seems to be about the world’s strange obsession with famous people—specifically the “stars” you see gracing the covers of tabloid magazines in the grocery store check out. Similar to how strange it was to hear someone like Nick Cave name dropping Wikipedia and Hannah Montana in his most recent album, it’s interesting to imagine Bowie giving a shit about pop culture in 2013, let alone writing about it.

There’s an interesting instrumental break around the 2:30-ish mark where a fuzzy electric guitar is featured prominently, and a lush string arrangement swirls in around it.  It’s a relatively gorgeous moment in a song that’s not necessarily meant to sound gorgeous.


Visconti’s clean production makes this song sound very slick—I’m guessing that the entire operation of The Next Day was pretty spendy, and you can certainly hear it in the two singles that have been released thus far. While listening, I tried to imagine what this song would sound like if it were performed and produced by a cira-1974 David Bowie. There would certainly be a lot more tape hiss, and the guitars would certainly be heavier—see “Cracked Actor” for an example of how raw this would have sounded 40 years ago.

In a few weeks, The Next Day will be released to the public. The two singles released show opposite ends of the Bowie spectrum. “The Stars (Are Out Tonight)” shows that Bowie has not grown soft at all—dude is 66 years old, so it will be really interesting to listen to this entire album from start to finish to see if there is a cohesive sound throughout.

"The Stars (Are Out Tonight)" is available now as a digital single in the iTunes store. It is also accompanied by a terrifying but captivating music video, co-starring Tilda Swinton.

The Next Day arrives on March 12th, courtesy of Columbia Records, and it comes in a variety of formats-- digital download, compact disc, DELUXE digital download, and DELUXE compact disc. These "deluxe" editions include three additional songs not found on the standard copies. The vinyl edition of the record has been delayed by two weeks. (sad trombone)