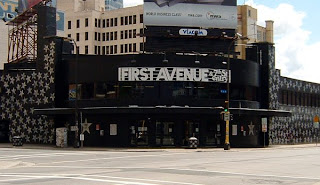 (more like WORST ave, am i right you guys?)

One of the things I learned from Friday night’s Eels concert at First Avenue is that the band has a very large following in the twin cities—the show wasn’t sold out, but you were practically “ass to ankles” with the person next to you. I also learned that The Eels attract a wide variety of people to their shows—but this may also be the venue itself.

There were the obvious hardcore fans, right up front, singing along to every song, punctuating each lyric or guitar note by pointing their finger on the hand attached to the arm they already had above their head in a celebratory fashion. There were a lot of people, of all ages, swaying awkwardly—you know the way that white people tend to do. There were quite a number of older people in the crowd. I saw a guy who kind of looked like Vice President Joe Biden (I’m guessing it probably wasn’t him.) I also saw a man who maybe could have been somebody’s grandfather. There’s no age limit cut off to a concert that I am aware of, but I’d say they were all probably there thanks to Minnesota Public Radio’s co-sponsoring of the show, as well as the heavy rotation of the new singles by the band.

Then there were the usual scenesters who you often see at First Ave shows—mostly young women, who are all dressed up for a night out on the town, walking around in groups of four or five, carrying large drinks with two straws in them. And again, here I am coming off a little judgey. Maybe these ladies are really fans of the band playing, but more often than not, they just continue to walk around the upstairs portion of the venue, or they stand and talk amongst themselves, yelling loudly so they can hear each other over the noise, perfectly fine with the fact that they spent hard earned money just to get in, so that they could talk amongst themselves while a band attempts to perform live.

Then there were was the couple who were basically having sex in the corner by the women’s bathroom. I know I wasn’t the only one who noticed. But I was the only one who seemed alarmed by it. 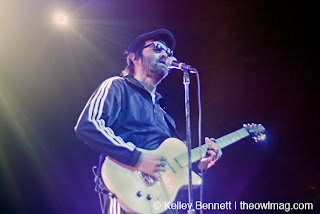 (a photo the internet provided me with from a night earlier on the tour.
we were standing in a portion of the venue with horrible sight lines.)

This was my first time seeing The Eels perform. The band is currently five members strong, and they are loud. Like, REALLY loud. And at a certain point, I had a hard time believing that this band started out as a trio back in the mid-90s.

Touring in support of Wonderful, Glorious, nine of the twelve songs from that album made an appearance. The rest of the set was made up of a smattering of songs from the extensive Eels canon—now ten albums deep, but it mostly relied on heavier material that would lend itself well to the sound of the band. Heavier is also what the crowd wanted—in a few of the more quiet moments during the show, specifically the song “Flower,” dating all the way back to their 1996 debut, I could tell that in slowing things down, people’s attention waned, and the low rumble of crowd chatter was much more noticeable.

As a live act, the band is tight and very well rehearsed. Mark Oliver Everett, or “E” as he is simply known is a strange bandleader—performing on what he refers to as the “lead singer riser.” Earlier in the set, he individually would command each band member to come down and give him a hug. In the final third of the set, he and guitarist “The Chet,” talked about how they had been rocking the world for a decade, and decided to renew their vows as lead singer and guitarist. It was an interesting bit to work into a set with little to no banter with the audience, but you could tell that it’s been done every night so far on the tour, and that it will continue to be done every night until it’s done.

The main set closed out with the title track from the new album, and prior to playing it, E mentioned that there was no way they’d be coming back out to perform any more songs after it was finished. Oh but that was a joke! The band sauntered back on stage after maybe two minutes of cheering and applauding, and played two more songs—one of which was an interesting medley of two of their most well known songs—“My Beloved Monster,” and “Mr. E’s Beautiful Blues.”

I went to the show with two friends, and a running joke we had throughout the night was how good the show needed to be to justify the ticket price. After all the taxes and hidden fees, it came out to be $30 a ticket. For The Eels? In 2013? In this economy? With a high price, we were all very surprised by how packed the show was.

Eels- That's Not Really Funny (live 2011) from the deluxe edition of Wonderful, Glorious

I would never say that The Eels are one of my all time favorite bands. They are responsible for an incredible record—1998’s Electro-shock Blues, which I still love to this day. Their interesting blend of rock, tormented pop, whimsy, and sadness is definitely one of those tings you have to be in the right frame of mind for. In a live setting, the band knows not to take themselves too seriously (they wear matching track suits for god's sake), and for 75 minutes, they will put on a fun, lively show worth of your $30.