The Bearded Life - The First Day of School 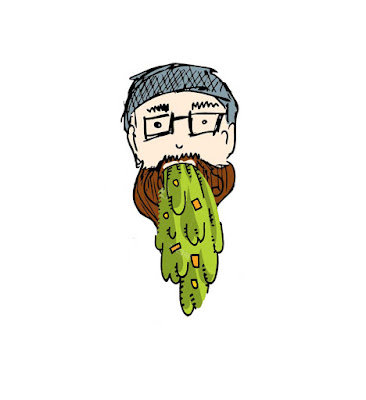 The September issue of the Southern Minnesota Scene magazine is currently on shelves now. And, despite our best efforts to set my September column to post online on the 21st, it didn't. This happened last month, and it's happened multiple other times as well. So while the website continues to suffer these......technical difficulties.....I will continue to share my column in its entirety on here. The theme for this issue was, at one point, "Back to School," and since I'm such a good little go-getter, I adhered to that theme for my topic; however, I get the impression that not a lot of other writers did. Oh well.

No matter how old you are, or what year of school you may find yourself headed into, everybody wants to look their best—look their absolute freshest and cleanest—on the first day of school.
And as I headed into my third year of college, in the fall of 2003, I was no exception.

I didn’t have this kind of a luxury in junior high or in high school—we had a dress code, and despite your best efforts, there was no way to make the navy blue polo shirt and a pair of khaki pants you were expected to wear every day fresh or clean.

I had my first day of class look all planned out—it started with a dope new Radiohead t-shirt I had copped over the summer from the Hot Topic in the Mall of America (how cool is that?); I followed that up with a navy blue track jacket, which had been a staple of my look at the time for about a year; then, a pair of flare leg jeans—because for men, in the early 2000s, those were a thing, and I was really into them for some reason. I finished it off with new pair of black and gray shoes.

This was long before I lost all my hair, and well before I grew a gigantic, beautiful beard—so my full head of hair was properly coiffed with the right amount of hair goop and hairspray, and my sideburns (they were so long at this time in my life) were on point.

Looking the best I could for a 20-year old in the year 2003, I grabbed my notebook and headed out for the first day of class.

But something was wrong.

About halfway through my first class, which if I can recall correctly, was a theatre related class (I had wisely chosen to be a theatre major in college) I began to feel ill.

Because this was an upper level theatre class, it didn’t matter that this was the first day of school for the fall semester—this wasn’t a “hand out the syllabus and be on your way kind of class”; no, our professor, a chain-smoking nun with a taste for scotch, was already well into a lecture when the feeling hit me.

More disconcerting than suddenly feeling ill at, like, 9:15 a.m. was what, exactly, I should do about it.

Rarely did I just get up and walk out of class to use the restroom—I held it in and then made a mad dash for the men’s room during the passing time between classes.  So, sitting near the back of the room, as our professor was lecturing, I started to assess my options on how best to handle the situation I found myself in.

I believe that, at the time, part of me was hoping that this feeling—one of nausea, as well as an increasingly more upset stomach—would just pass, or that I could at least keep it at bay until 9:50 a.m. when we were dismissed. But as I sat taking notes, I realize that this wasn’t going to be the case at all.

The feeling of nausea was beginning to rise, and at a rapid speed. I needed to act quickly.
I can recall, in an effort not to draw attention to my predicament, getting up slowly from the desk I was seated in, and quietly and respectfully making my way toward the door to the classroom, closing it gently behind me.

After the door closed, that is when I started running.

There was a men’s room in the distance, and as my step quickened, growing more frantic and urgent with each time my brand new pair of shoes hit the floor, I hoped that I was going to make it in time.
And as I was getting ready to turn into the entryway for the restroom, that was when it happened.
The nausea had risen to the point of no return.

It all happened so fast—the incident, which, in retrospect, is probably one of the most embarrassing things to happen to me in my entire life—which is funny, because no one else was around to see it.
Instinctively, to brace myself for what was about to happen, still running toward the men’s room door, I placed my hand over my mouth—but that’s when I lost it. I let it all go, violently throwing up onto my incredibly fresh first day of school outfit, and also throwing up onto the white tile floor below me.
It gets better.

Due to the violent projection of my vomit, what came out of me had landed a little further down the hallway, and due to the speed with which I was running, I ran right through the puddle of it that had collected. I then proceeded to lose my balance and fall quickly and comically to the floor, all before sliding a number of feet, all before crashing into the wall in front of the bathroom door.

Picking myself up, I opened the door to the men’s room and lunged my way inside, scrambling toward the first stall.

Still, it gets better.

It took awhile, if I can recall correctly, but I managed to get myself cleaned up—or at least as best I could, and I lumbered back to the classroom to collect my belongings. Had I been thinking, I should have just gone back to my dorm and gone back to bed, or gone to the health services office for medical attention.

But instead, foolishly, I walked across campus to my next class—a rudimentary computer class I was required to take as a Gen. Ed.

Again, as class got underway, a feeling of dis-ease hit me. Seated at the back of the class, I noticed a restroom right behind me, which I tried to slide into. However, I realized that if I could still hear the muffled sounds of a nervous adjunct professor talking about Microsoft Office coming through the door, the entire room could probably hear me, sick, on the toilet.

The next couple of days that are a bit of a blur; perhaps by the next day I was better, but due to this unfortunate series of events, I was ill prepared (literally; figuratively) for the theater audition for the school’s fall production.

And, to this day, some 13 years later, I still don’t know what caused the sudden onset of such a horrific and violent sickness. For a time, I blamed what I had eaten in the cafeteria the night before, which I believe had been some kind of Portobello mushrooms marinated in something.

For me, it’s a day when I violently threw up all over myself.