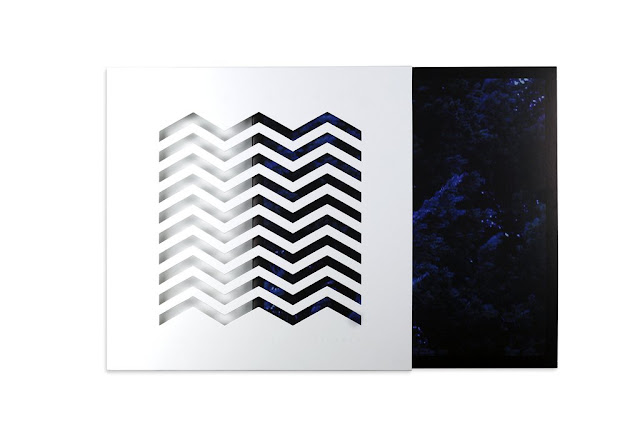 The faint sounds of Angelo Badalamenti’s somber theme to “Twin Peaks” could be heard coming through the house, penetrating ever so slightly my closed bedroom door as a kid. From April 1990, to June 1991, the haunting, pensive guitar string plucking and twinkling synthesizers meant that it was time for me to vacate the living room and head to my own room, allowing my parents to watch the show in peace.

My parents were both huge fans of the show—they taped every episode, they bought the compact disc of the soundtrack upon its release, as well as Juliee Cruise’s Badalamenti-produced LP, Floating into The Night; they bought “Peaks” related books, like The Secret Diary of Laura Palmer, and The Autobiography of FBI Special Agent Dale Cooper—My Life, My Tapes.

I was seven at the time the show debuted, so I was obviously sent away from the living room for my own good. “Twin Peaks” was something no seven year old should be exposed to—and even watching the show from start to finish at age 26, there were moments when I wondered if a grown ass man should be watching it. The 90s must have been a different time—a time when something like this was totally okay to be on broadcast television. No broadcast network now would be willing to take such a risk.

Bizarre, goofy, unsettling—and so much more, the mystery of and the mystique surrounding “Twin Peaks” draws you into it. So much of it is iconic—coffee, pie, donuts, Dale Cooper—and the show’s music is no exception.

Long out of print on compact disc, the original soundtrack to “Twin Peaks” is now being reissued on vinyl courtesy of Death Waltz, a specialty label known for its attention to detail in reissuing soundtracks. The reissue itself was announced over two years ago, but for a number of reasons, did not materialize until just now; early orders were released mid-August, and the record will be available in retailers in September. An additional pressing from the label’s website is expected to ship in October.

A slender eleven tracks, the soundtrack features eight instrumental pieces from the show composed by Badalamenti, as well as three that feature the ethereal vocals from Cruise—including the show’s theme song, rechristened as “Falling.”

Much like the show itself, the soundtrack balances a sense of impending dread and whimsy.

The opening theme is haunting, yet with glimmers of hope; the jazzy numbers “Audrey’s Dance,” “Freshly Squeezed,” “The Bookhouse Boys,” and “Dance of The Dream Man” provide a little bit of off-beat humor to lighten the mood; “Laura Palmer’s Theme” juxtaposes a terrible, unspeakable, unsettling feeling through its overuse of low, ominous synthesizers that temporarily give way to big, cheesy, swooning moments that sound like they belong in the climactic scene of a soap opera somewhere; “Night Life in Twin Peaks” also terrorizes, as jazzy flourishes swirl around rumbling and dissonant drones.

The humorously titled “Love Theme from Twin Peaks” is equally as unsettling as it takes on an alternate and paired down arrangement to “Laura Palmer’s Theme.”

A quick browse through the catalog on the Death Waltz website shows the label means business when it comes to commemorative packaging for its reissues. Approved by David Lynch himself—the “Twin Peaks” soundtrack arrives in a die-cut slipcase, the chevron a reference to the flooring in the Black Lodge. The gatefold sleeve does away with the original compact disc artwork of the ‘Welcome to Twin Peaks’ sign, and replaces it with a still shot of an ominous wind blowing through trees—it seems worth noting that throughout the show, Lynch was a master of creating dread by simply filming everyday things like wind blowing through trees, and ceiling fans. 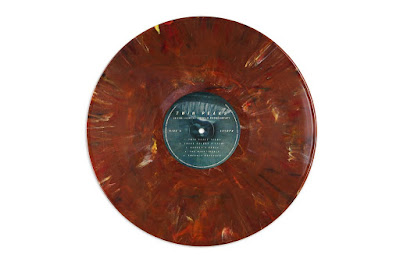 The inside layout features a rather large portrait of Badalamenti and a statement from him on his work with Lynch and the pieces for the soundtrack; the record itself is pressed on ‘damn fine coffee’ colored vinyl.

Once the records were up for pre-ordering, someone I follow on Twitter took to the internet to complain about the packaging—asking why the artwork had been replaced with seemingly out of context screen shots from the series, and said the effect used to create the colored vinyl made it look like diarrhea.

I will admit, brown marbled vinyl does look a little odd with the chilling blue sticker placed in the center of side A, but I appreciate the sentimentality that went into the idea.

With the rest of the packaging—yes, it’s impressive, but the slipcase is pretty fragile. Mine took a beating in shipping, leaving a rather large crease in the top, and the chevron itself is very delicate, something I learned while attempting to remove the cellophane.

My wife also pointed out there are at least two typos in the liner notes written by Badalamenti perhaps something that may be corrected in a later pressing?

In his notes, Badalamenti talks about the timelessness of this music, and to some extent, I agree with him. For something over 25 years old, it’s aged pretty well, although some of the synthesizer sounds come off as being very dated, and the blasts in “Audrey’s Dance” are just plain silly. He said they went with jazz because of the timeless appeal, but I feel like in 1990, there was almost already some kind of nostalgia built into the music then—similarly to the strange sense of nostalgia in Lynch’s film Blue Velvet.

“Twin Peaks” never catered to the trends of the 1990s; however, it is a complete product of the time. And because we are all aching for yesteryear, that is why the show has gained such a massive cult following (of all ages) over recent years, and that’s why the show is coming back for a third season, set to debut in 2017.

For the “Twin Peaks” fanatic, owning something like this soundtrack on special edition vinyl is probably a dream. It sounds great, and the packaging, in theory, is neat, though it does give me reason for pause in its execution. Even for the casual fan of the show, it’s something worth adding to your record collection. However, much like the show itself—which you have to be in the right frame of mind to want to watch—the soundtrack is similar. At times it can be fun, but for the most part, it’s odd and eerie, which is not something that lends itself well to a casual listen.