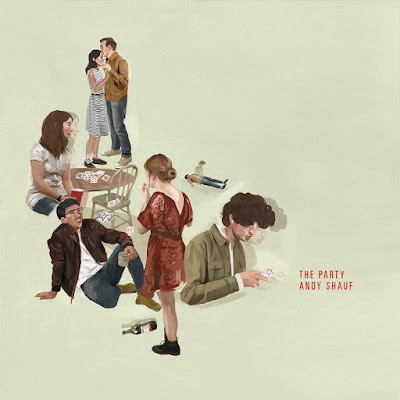 Case in point is the third release from Canadian singer/songwriter Andy Shauf, The Party, which was released in May. Despite coverage from Stereogum that I apparently slept on and/or totally ignored, I did not hear of Shauf or this album until Monday afternoon when someone in my Facebook feed shared the video for the album’s opening track, “The Magician,” and said “There’s a whole lot of Jon Brion and Elliott Smith in this.”

That is a pretty accurate assessment of The Party—a rollicking, relaxed, and at times pensive exercise in moderately psychedelic, post-Beatle-esque baroque pop, Shauf does call to mind the heavily layered sounds of Elliott Smith’s major label debut XO, as well as of Brion’s whimsical, innocent soundtrack work, like that of Eternal Sunshine of The Spotless Mind.

And throughout the album’s (painfully) short running time, Shauf also is reminiscent of work as diverse as early Nick Drake, and of the one-off album by the Los Angeles collective Lusk—critically, he draws comparisons to Paul Simon and Harry Nilsson.

The Party is bookended by its best moments—however, that is not to say that sandwiched in between is filler, or is bad. It’s just that the weighty orchestration of “The Magician” and the somber tension of “Martha Sways” showcase what is most successful about Shauf’s songwriting and ambitious orchestration.

By incorporating orchestral elements throughout, Shauf adds extra depth to this ten-song collection—he also comes off as being very sincere, which helps. In some instances, the 1970s style arranging and songwriting structure may come off as a gimmick, but that isn’t the case on The Party.

The near titular track, “Early to The Party,” also serves as one of the album’s best—finding Shauf settling into a mellow, reflective groove.

Even with how enjoyable The Party is from start to finish, it is far from flawless. It is entirely too short—seemingly over in the blink of an eye. Rarely is there a record that you wish were longer than it is, but this happens to be one of them. With that being said, however, Shauf imbeds himself, as well as you, so deeply in this atmosphere he’s created that the middle section of the album tends to not so much lose steam, but gets a little samey sounding.

The Party is the kind of cohesive sound Shauf has been building toward over the last seven years. Independently releasing Darker Days in 2009, he subsequently released two EPs before his proper sophomore follow up, The Bearer of Bad News. The Party is his first full-length for Anti- (in America) and Arts and Crafts (in Canada.) In his previous efforts, you can hear minor flirtations with this sound he’s fully captured now. The Party is not a “one of a kind” record, but it’s still an impressive effort from a relative newcomer—a bold, risky artistic statement that pays tribute to its influences but is never derivative; it is interesting and compulsively listenable.