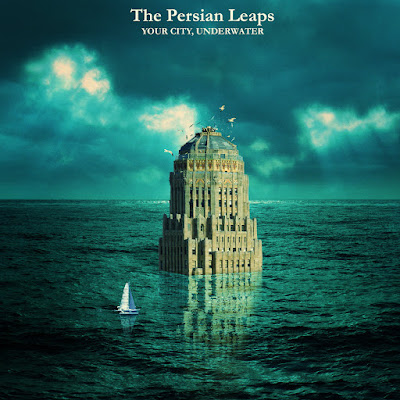 As the leaves begin to turn, and as kids start to head back to school, it becomes more apparent that summer is over, and autumn is nearly upon us. And, like clockwork, as they have for the last two years during portion of the calendar, the Twin Cities-based jangle pop band, The Persian Leaps, are readying their fourth EP, Your City, Underwater.

Sticking to the successful formula from their previous efforts that I’ve reviewed for this site, The Leaps manage to pack a walloping power pop punch into a concise five-song set—wasting no time, and literally not coming up for air until the aptly titled “Short and Sour” (it’s 90 seconds long) finishes up.

In my previous reviews of EPs by The Persian Leaps, as well as other groups that tap into a specific nostalgia sound, I believe I have stated that the 90s are alive and well—and Your City, Underwater continues that effort. Taking cues from groups like Teenage Fanclub and early-to-mid-period R.E.M, the guitars are plentiful, loud, and crunchy.

Like a bulk of The Leaps canon, the songs on Your City are infectious and hook driven—good luck getting a song like “The Weather” (a piece about climate change) out of your head after hearing it just once. This set also allows the group’s vocalist and guitarist, Drew Forsberg, to showcase some sardonic wit within the lyrics—“I’m not happy, you’re not happy, let’s elope and start an unhappy family…We can be as wretched as we please, we can climb the depths of our despair,” he sings, with all earnestness, on “Terribly Happy.”

Then, on the aforementioned closing track, “Short and Sour,” Forsberg drops this cutting opening line: “If silence were golden, you’d always be broke.”

Tapping into the nostalgia for “alternative rock,” The Persian Leaps continue to build onto the genre rather than just grave robbing it, and Your City, Underwater shows in its brief running time that there are still plenty of interesting and worthwhile things happening in guitar driven music.

Your City, Underwater is out on September 16th via Land Ski Records.