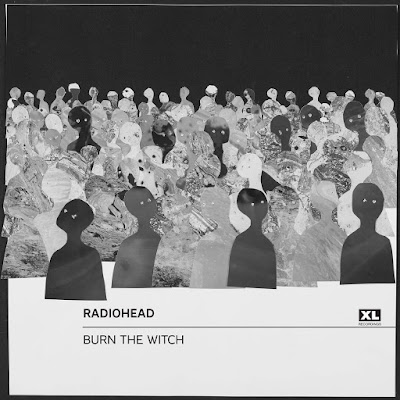 I’ve apparently always been some kind of curmudgeon, or caustic individual; and apparently, for longer than I’ve been really aware, very little in life has brought me joy.

Many years ago, I used to work in an office—it was a terrible job, and I worked for a terrible individual, and I guess my bad attitude, or sullen persona was very noticeable to those around me.

On the day that In Rainbows was made available to download, it apparently was one of the few things in life that put me in a good mood. So good, in fact, that a co-worker noticed it, and in doing so, pulled someone aside to say, “I wish Radiohead would release a new album every day.”

Before we get into analyzing the new Radiohead single, “Burn The Witch,” let’s, for a moment, talk about the agonizingly slow gestation of and the anxiety producing roll out for the band’s new album—the title, and release day of which, have yet to be revealed as of this writing.

Things had been happening in Radiohead’s camp for a while—it was common knowledge the band had spent a bulk of 2015 in the studio, and they had started announcing live festival dates for the summer of 2016. All signs were pointing to a new album. The question was when, and how, would it be released.

And then, there was nothing.

By that I mean both there was no news for, like, a really long time. But I also am referring to what the band opted to do beginning on Sunday, May 1—when their website went completely blank, along with deleting every Facebook post and every Tweet from the Radiohead accounts.

Prior to that, however, on April 30, fans in the UK received a cryptic postcard with artwork by Stanley Donwood, and text that read “Burn The Witch,” leading to more speculation that something new was happening, that it was happening soon, and that it involved an unreleased song that had been kicking around for a number of years.

As my wife pointed out, the whole thing was a pretty neat marketing idea—but she is only a casual Radiohead fan. She doesn’t have multiple Radiohead themed tattoos like I do. For the die-hard Radiohead fan—the band erasing its internet presence was incredibly stressful. WHAT DID IT MEAN?

After a day of no communication (Monday) I awoke on Tuesday to find that ‘teaser’ videos were posted online. By the time I had a moment to check for news again, later in the morning, the video for “Burn The Witch” had been released. I just about knocked everything off of my desk at work in excitement and scrambled for my headphones, hoping that for the next four minutes, nobody needed anything and that nothing important would happen in the newsroom.

Opening with incredibly tightly wound string plucks that effortlessly slide into electronic percussion and a scuzzed out, fuzzy bass line, “Burn The Witch” in all of its complexities and layers, serves as a way to merge the sound of where the band has been—beats, shimmery guitars—with where it’s going—heavy, heavy usage of orchestral strings, which is something that Radiohead have dabbled in in the past, but based on this, as well as the band’s rejected theme to Spectre, it all seems to suggest a new, very dramatic sound.

Behind the board, as always, is Radiohead’s go-to producer Nigel Godrich, who has worked with the band in some capacity since The Bends. Here, the focus really seems to be on the strings—they overpower everything else in the mix, specifically in the refrain of the song. While frontman Thom York howls “Burn the witch” through a cavernous reverb—his vocals soar, but it’s the low end rumbling of the strings that overtake the song.

Radiohead have always sounded relevant, and more often than not, they’ve been ahead of the times; however, on “Burn The Witch,” they sound more unnerving, dark, and urgent—things that they haven’t been able to capture in a long time. While The King of Limbs has its charms, it’s cut and paste aesthetic gave it a fractured and distant feeling. It was only in the album’s final moments, on “Separator” where it sounded like the band was on the cusp of something, but even then, the song is so reserved in its execution, they never quite reached what they could have.

Five years of silence, side projects and solo albums have seemingly done wonders for the band, in a sense rejuvenating them. With almost every Radiohead album—both the innovative and the not as innovative, the band always seems to deconstruct its sound, only to rebuild it again—familiar, but also strikingly different. That’s what occurs on “Burn The Witch,” and that’s what, presumably, will happen with this forthcoming album. It’s intrinsically Radiohead, but after, like, 25 years, the band is still finding ways to surprise and reinvent.