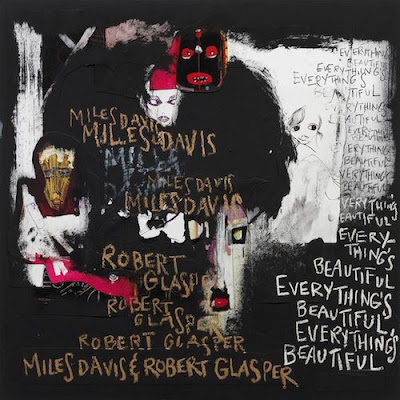 Before I even hit ‘play,’ I kind of had to stop and wonder, what would Miles Davis think of the Robert Glasper album, Everything’s Beautiful?

Davis himself receives top billing on it, but for someone as cantankerous as history portrays him, you have to wonder what he would make of something like this. Would he condone it, and give the idea his blessing? Or would have had told Glasper to go fuck himself?

Serving as a bit of a companion piece to the Miles Ahead soundtrack, released at the beginning of April, Everything’s Beautiful is a tough album to categorize—it’s not a “remix” album per se, so calling it one may be selling it short; but if it’s not that, then what is it?

Constructed around samples of Davis’ work, as well as featuring a straight up cover, the album is supposed to serve as more of a homage or a tribute to Davis—and by sampling his work and interpolating it into these new pieces, in a sense, it doesn’t so much reimagine Davis’ music, but brings it into 2016 with a fresh approach.

Davis himself—his trademark raspy voice—makes a ghostly appearance in the album’s opening track, aptly titled “Talking Shit”—where Glasper uses studio chatter of Davis instructing and somewhat criticizing other musicians in the studio as a series of rather simple, groove-oriented loops are built up around him.

Everything’s Beautiful is host to a cavalcade of guest appearances—ten of the album’s eleven tracks have a feature—the biggest names coming from Erykah Badu, who shows up on the slightly underwhelming “Maiysha (So Long),” and Stevie Wonder, who contributes harmonica to the album’s closing track, “Right On Brotha.”

With the variety of artists included on the album, Glasper finds the most success when he gets help from rappers Illa J on the way too short “They Can’t Hold Me Down” and from Phonte on “Violets.” And I think the reason those songs work the best is because of the environment Glasper creates—the sample based jazz and R&B environment lends itself well to someone rapping over the top of it.

The rest of the album doesn’t fall flat, but many of the tracks are honestly of little consequence in the larger picture. “Little Church” slows the album’s pacing down, as does the trudging “Song For Selim,” featuring post-R&B trio KING. The funky “I’m Leaving You” tries to pick the energy level back up prior to the conclusion, and to some extent it works, but unlike the aforementioned hip-hop pieces, or even the slightly unnerving “Ghetto Walkin’,” the song itself lacks any depth.

Everything’s Beautiful isn’t a bad album by any means, but it’s the kind of album that leaves you wondering if it was something that was necessary. Like, did Robert Glasper really need to spend time crafting these Miles Davis interpretations? I mean, this isn’t life changing music here—my life would go on just fine had I never listened to this.

The conclusion that I can draw from something like this is that it was a fun experiment. I commend Glasper’s ambition, and overall, the execution—despite falling flat in a couple of places—is admirable. But there’s no real takeaway or something that will stick with you from Everything’s Beautiful—for the passing jazz fan, both modern and classic, it’s worth a listening to once, but it isn’t the kind of thing that I can see myself returning to in the future with any regularity.