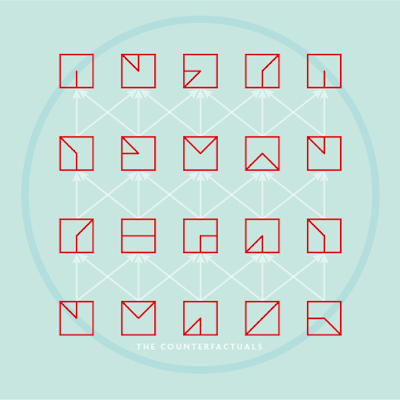 In the effort of full disclosure, I feel like I should mention that I am acquainted with, like, three of the four members of the Northfield-based band The Counterfactuals—specifically frontman Daniel Groll, who, while I was interviewing him for a piece in the Northfield News, casually slipped me a copy of the band’s self-titled sophomore LP.

During our conversation—which mostly focused on the recording timeline and process of the album, and the balance of work and family with band stuff—Groll talked about “moments” in music; like, when specific moment in a song hits you. I suppose the best example I could give off the top of my head is when the strings come in at the very end of “Reckoner” by Radiohead.

The reason we were talking about this is because I asked him what he wanted people to get out of listening to the record—and he said that rather than lyrical themes that he wanted to resonate, he wanted the record to give people that “moment”—citing specifically when the piano arrives within the final moments of the album’s excellent opening track, “Fading From Bright.”

And to an extent, I would agree—yes, that is one of those moments. And another, slightly more obvious example is when the full band finally comes together on “Turn The Tables,” the outstanding closing track on the album’s first side.

Landing nearly two years after the band started workshopping material and recording in spurts, The Counterfactuals is not so much a complicated record, but it is a dense, multi-layered affair. It’s an album that, through the course of its nine tracks, works as an attempt to show the growth that has occurred from in the band, as well as a chance to shed a little bit of the “pop” from the band’s formerly “jangle pop” sound.

Sure, it’s still jangly—but in many cases, it is now in a more ramshackle way—think the kind of cacophonic indie rock that a band like early-era Wheat, the French Kicks, or The Walkmen were able to create and you’ll get the idea.

That cacophony, and dense layering is thanks in part to the instrumentation on The Counterfactuals—cavernous reverb drenches many of the guitars, and the inclusion of multi-instrumentalist Jason Decker’s Moog synthesizer collection gives the band a sonic edge that many other “standard” indie rock outfits are lacking.

I say the band is working to shed a little bit of its “pop” sound, but that is not to say aren’t songs that have a pop focus—the refrain of “The Daylight Lies” will be stuck in your head long after you’re finished listening to it, and the album’s second track, “Hide in The Noise” is propelled forward by a strong, catchy driving rhythm.

Structurally, The Counterfactuals is paced so that it reaches a natural peak around the middle section of the record, and then is slowed down with the double shot of “Turn The Tables” and the slow burning “It Won’t Sting For A While.” As the album careens towards its conclusion, the group works to build the momentum back up with the two-minute blast “Every Turn You Take is Right,” and the album’s first single, the lengthy “Might As Well Join In,” an indie-rock anthem that the four-piece plays with a refreshing, near reckless abandon.

The record closes with a bit of an epilogue—the somber, heartfelt “In My Grave”; I’ll admit, I chuckled at the title at first—Groll and I were discussing his lyrical themes, one of which is getting older. However, the song itself is dedicated to his wife.

The Counterfactuals are a group that successful strike a balance between taking themselves seriously enough to make a record such as this—but also not taking themselves too seriously. Outside of the group, all four members are professors at the colleges in Northfield. The band is a little more involved than just a hobby, but they are all at a place where they have no pretentions about “making it” in the music scene.

An auspicious collection of songs and an enjoyable listen from start to finish, The Counterfactuals is a fun record that takes a very smart and literate look at being an adult—marriage, parenthood, careers—and funnels those ideas in accessible yet interesting ways.

The Counterfactuals is self-released, and is due out on June 10.
Labels: album review indie rock jangle pop minnesota new music northfield review