Album Review: Tape Loop Orchestra - Go Straight Towards The Light of All That You Love 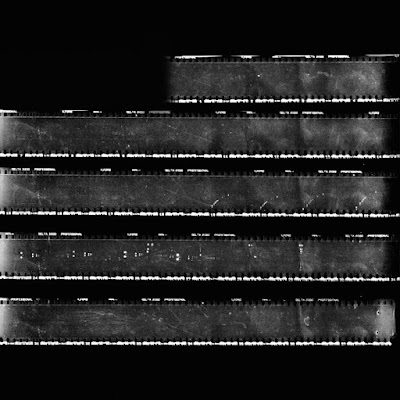 The new album from Andrew Hargreaves’ one-man project, the Tape Loop Orchestra, is an incredibly intimidating affair—both in appearance, as well as in the sounds contained within.

Arriving in my mailbox encased in a pitch black outer bag, Go Straight Towards The Light of All That You Love was pressed as a vinyl edition of 250—all of which are gone now, along with the additional run of compact discs that were offered as consolationprizes to those that missed out. 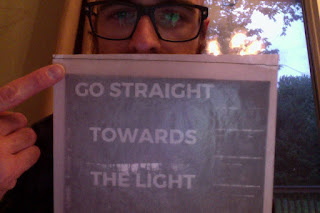 Inside that bag is the album, presented on clear vinyl, as well as a stitched shut envelope (I am afraid to open mine, for some reason), containing a print of the album’s default cover art, a 16 page booklet, and a CD copy of the album for good measure.

The artwork on the outer sleeve, as well as on the sleeve for the record, is all nearly black—blotchy and grainy photos of someone walking down the middle of a city street or of rundown looking buildings only work to mirror the music found on the 40-minute running time of this album.

But enough about the presentation—let’s talk about the music.

I have been a fan of Hargreaves’ work since I started this blog, so needless to say, Go Straight Towards The Light was one of my most anticipated releases of 2016—and it does not disappoint. 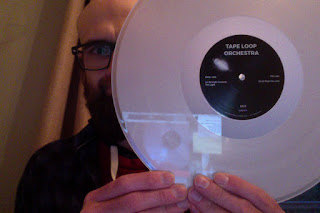 Split into two distinct 20-minute, multi-movement compositions, this release finds him moving away from the dusty, decaying, heartbreaking sounds of the last full-length Tape Loop Orchestra effort, In A Lonely Place.  Sure, there are still sounds that decay—that’s the nature of tape loop based work; but here, you find warmer tones and layers starting to be incorporated, making for an alltogether surprising, and as expected, comforting listening experience.

I say he moves away from the dust and the decay, but that’s actually how the album’s first piece, “Go Straight Towards The Light,” opens—beginning in dissonance, Hargreaves works over the course of the next several minutes to weave cascading, somber layers to create something in line with his work on In A Lonely Place. Eventually, this all gives way for soothing strings and moody synths, anchored down by something new to the Tape Loop Orchestra array of sounds—manipulated, disembodied voices—circling around the other textures being created. The piece eventually makes its way through one final, somber string heavy movement before it oscillates and evaporates completely.

“Of All That You Love” also begins in dissonance, and builds to be a rather haunting, borderline menacing, relatively downcast affair—sweeping strings and warm, warbling synthesizers rumble throughout the soundscape, though the piece focuses on eerie, effected wordless vocals that are processed in away that they begin to sound like the buzzing of a swarm of insects.

All of that is then funneled into the piece’s second movement, based around shimmering and hopeful sounds that are fighting against the current of marginally spooky noises that carried over from the first half.

It all ends with a warm, inviting, brief synthesizer coda.

To say that Go Straight Towards The Light of All That You Love is the kind of album you can get lost in is an understatement. In fact, it’s a little too easy to allow the music to overtake you completely.

While it doesn’t pack as deep of a resonating emotional wallop as its predecessor, it is a listening experience not to be trifled with. Throughout the course of these two pieces, Hargraves creates otherworldly sounds that will haunt you long after you’ve finished listening.

Go Straight Towards The Light of All That You Love was released by Fluid Audio/Facture. It is now sold out, but you can buy a copy for triple the value from Discogs.
Labels: album review ambient andrew hargreaves drone experimental new music review tape loop orchestra